Size Matters: Why Solar PV Isn't Always the Solution (But Sometimes It Is) 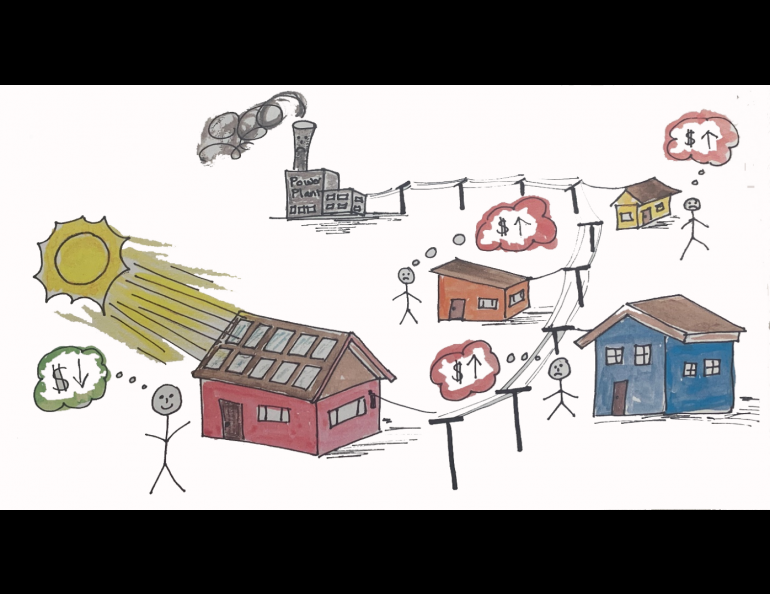 Solar in a community

Size Matters: Why Solar PV Isn't Always the Solution (But Sometimes It Is)

By Gwen Holdmann, Director, Alaska Center for Energy and Power

If you can afford it, who wouldn’t want to install solar power on their rooftop? Globally, there has been a proliferation in the manufacture of low-cost, reliable equipment to support small scale renewable energy system development, and solar photovoltaic (PV) technology has been one of the leaders of this market trend. A high proportion of this solar PV technology has been installed by customers ‘behind-the-meter’ (on the customer’s side of the meter) to offset their own electric power consumption. Under this scenario, customers essentially use the utility grid as a battery – feeding power to the grid during the day when they generate a surplus, and drawing power from the grid at night or on rainy days when their domestic loads exceed the amount they are producing from their solar panels. 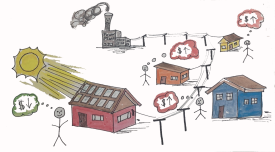 This application of solar PV technology ‘behind-the-meter’ has caused issues related to power quality and grid stability in some markets where the use of solar PV power has proliferated rapidly. One example is in Hawaii, where distributed solar PV installations generate a significant portion of energy during daylight hours. In addition to technical issues, widespread consumer-owned generation challenges the traditional electric utility business model, which has historically been designed around centralized generation, with utilities sending power one direction to passive consumers on the other end of the line. An enormous investment in infrastructure has been made by utilities to provide reliable power to their customers, with costs being recovered over decades.

In Alaska, these technical and business issues can be magnified significantly because electric grids are very small in comparison to most markets. With smaller grids, there is less capacity to absorb energy from significant, but intermittent and unpredictable, sources of energy without disruption to the overall power supply.  For example, solar PV output can ramp up and down very quickly based on the immediate availability of energy from the sun, which can drop off substantially every time a cloud passes overhead.. This means that, in order for utility on a small grid to maintain power availability, it needs to have back-up generation online, called a spinning reserve, ready to go instantaneously to make up for rapid fluctuations in solar output.

Solar PV production in Alaska is at its highest during the spring and summer months, which is also the time of year when communitiestypically experience lower demand from the grid (the exception to this can be when there are significant summer commercial activities, such as fish processing or tourism). And even if a customer has every intention of using all solar-produced power onsite and is not planning to export power, there will almost certainly be times when the sun is producing more power can be used by the residence at that instant. If connected to the grid, the extra power produced is sometimes pushed back onto the grid. Even if this doesn't happen, the site load will be reduced beyond what the utility planned for. If enough significant community consumers become self-generating, the overall minimum load seen by the utility can drop even lower, creating real issues. Diesel generators run less efficiently under low-load conditions, which means they use more fuel to generate the same amount of power. Without an accommodation for load control or generation curtailment, this situation of high customer self-generation could cause an increase in cost to generate power from the diesel power plant and potentially serious disruption to the grid.

In smaller grids with less inherent inertia, these impacts can be even more severe. A 1 kW home system installed in a 100 kW system represents an immediate 1% change in power when the system output drops off (say, due to a cloud passing overhead). If 10 such systems are installed on that grid, the impact is 10%. The utility needs to have generators online, spinning but not producing power (called ‘spinning reserve’), to be able to instantaneously make up the deficit. In contrast, the same 1 kW PV array is lost in the noise on a 100 MW grid, although if enough of them are installed similar issues may arise. The bottom line is that, in our society, we expect reliable power quality and production, and it is the utilities’ jobs to deliver that product. That job is harder and more expensive when utilities need to follow solar PV production with baseload generation, which is often met by fossil fuel-based sources of generation.

Other unintended consequences can also occur on small grids if solar PV projects are not planned properly. For example, most utilities produce what is called '3-phase' power, where AC power is carried on an A, B, and C phase.  Since most homes and businesses require only 120 volt electricity, each building is only on one phase and the utility attempts to balance the amount of power drawn on each phase to prevent outages and other issues.  If the phases become out of balance because a few houses on one phase produce solar power and significantly reduce their need for the utility, the resulting phase imbalance could cause outages for the whole grid. It could also impact the system protections (line fuses are an example) in the utility grid and pose physical danger to consumers when faults arise.

The bottom line is that, while solar energy can be a viable resource in Alaska, it does not come without challenges. It is important to understand not only the benefits to the individual resident or facility, but also how it can impact other residents and a utility’s ability to keep costs contained. There are ways to mitigate these issues, such as using onsite storage (like batteries) that can benefit the homeowner or individual consumer in case of an outage, but these solutions come with higher upfront costs. Another approach can be to work as a community to build a larger scale solar PV project in consultation with the local utility that can help with sizing, optimal location, and controlled operation. Often, these community solar projects benefit from better economies of scale, access to the most optimal local resources, and improvement in the energy security and resilience of the community as a whole – rather than just one or two residents or buildings that can afford it.

Acknowledgements: A big thanks to my colleagues at ACEP including Erin Whitney, Michelle Wilbur, Mari Shirazi for helping write this article!

Solar in a community