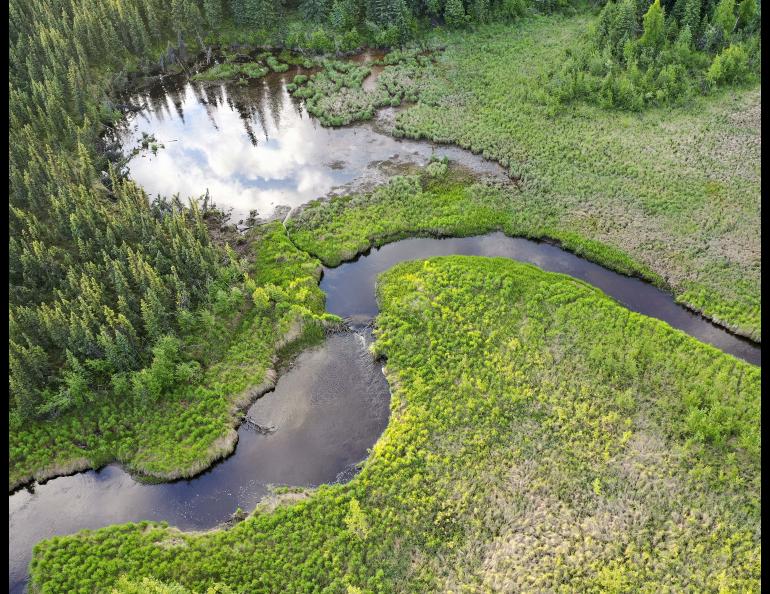 A view from above of a beaver dam on Goldstream Creek near Fairbanks. Photo by Ken Tape.

Beaver invasion on the Baldwin Peninsula

Scientists have documented a recent population explosion of beavers on the Baldwin Peninsula near Kotzebue.

Using satellite images, the researchers counted an increase from two to 98 beaver dams near Kotzebue between 2002 and 2019.

“Our study shows that (beavers) were responsible for two-thirds of the increase in surface-water area in the Kotzebue study region since 2002,” said Ben Jones of the University of Alaska Fairbanks’ Institute of Northern Engineering.

Ken Tape of UAF’s Geophysical Institute, a co-author with Jones on a recent paper, has studied the beaver’s expansion to northern Alaska. He said the new research further documents beavers pioneering new landscapes in the far north, now with “amazing” detail.

“Equally important is that beavers are more dominant than climate (and anything else) in driving surface-water changes,” Tape said.

The scientists, including a few from the Alfred Wegener Institute in Germany, have documented what locals have been noticing for the past few decades: more beavers, which in turn means more lakes and different reactions of fish and game animals to the changes.

A few years ago, Ingmar Nitze and Guido Gross, also co-authors on the current paper, squinted at satellite images to document 56 lakes that beavers had created in just 15 years over a New Jersey-size swath of northwest Alaska.

“People in all the Kobuk (River) villages, and in Selawik, the Seward Peninsula, Kotzebue, Noatak and Kivalina, have all observed it,” Tape said.

In making their dams, slowing streams and pooling up water, beavers introduce a source of heat to permafrost landscapes, where soil has been frozen for perhaps hundreds or thousands of years.

The beavers also seem to be attracted to the depressions left behind when ground-ice chunks as large as city buses thaw. Scientists call this thermokarst. Thermokarsts often fill with water to become lakes. In the recent paper, Jones and Tape noted that beavers seemed to build dams along waterways at the edges of drained thermokarst-lake basins.

Since these drained lakes cover more than half of the arctic tundra lowlands in Alaska, that immense spread of land may be wide open for further establishment of the beaver.

Beavers live in northern Mexico and in every U.S. state and province of Canada. The size of Labrador-retrievers, beavers do not hibernate. To survive the winter, they need a cache of willow and poplar branches to eat and a few feet of water that does not freeze. They mate in January or February, and females give birth to two-to-four kits from about now until June.

How the beavers got to the lollipop-shaped Baldwin Peninsula, which is surrounded by salt water and extends north of the Arctic Circle, is anyone’s guess.

“The peninsula is situated just to the west of where the Kobuk and Selawik rivers empty into Hotham Inlet and Selawik Lake,” Jones said, figuring beavers may have followed the flow of the big rivers westward.

Beavers may be moving into northern Alaska because the animals are still recovering from the removal of almost 3 million beaver pelts from the far north in the late 1800s by trappers. Warmer air temperatures encouraging the growth of willows and poplars may also be a factor.

Though beavers seem to be a recent addition to the Arctic, the late David Hopkins, an expert on the Bering Land Bridge who left boot prints all over Alaska, in the 1960s documented preserved logs on the Baldwin Peninsula that beavers gnawed 10,000 years ago. 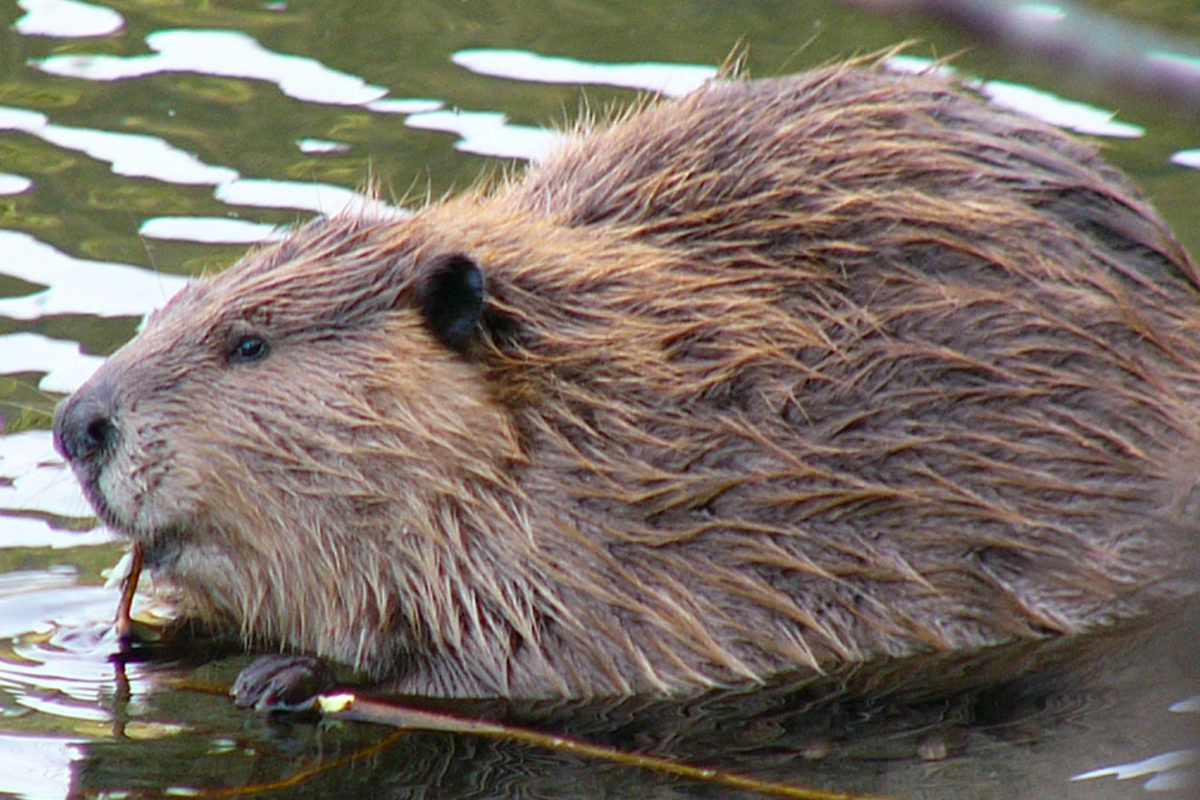 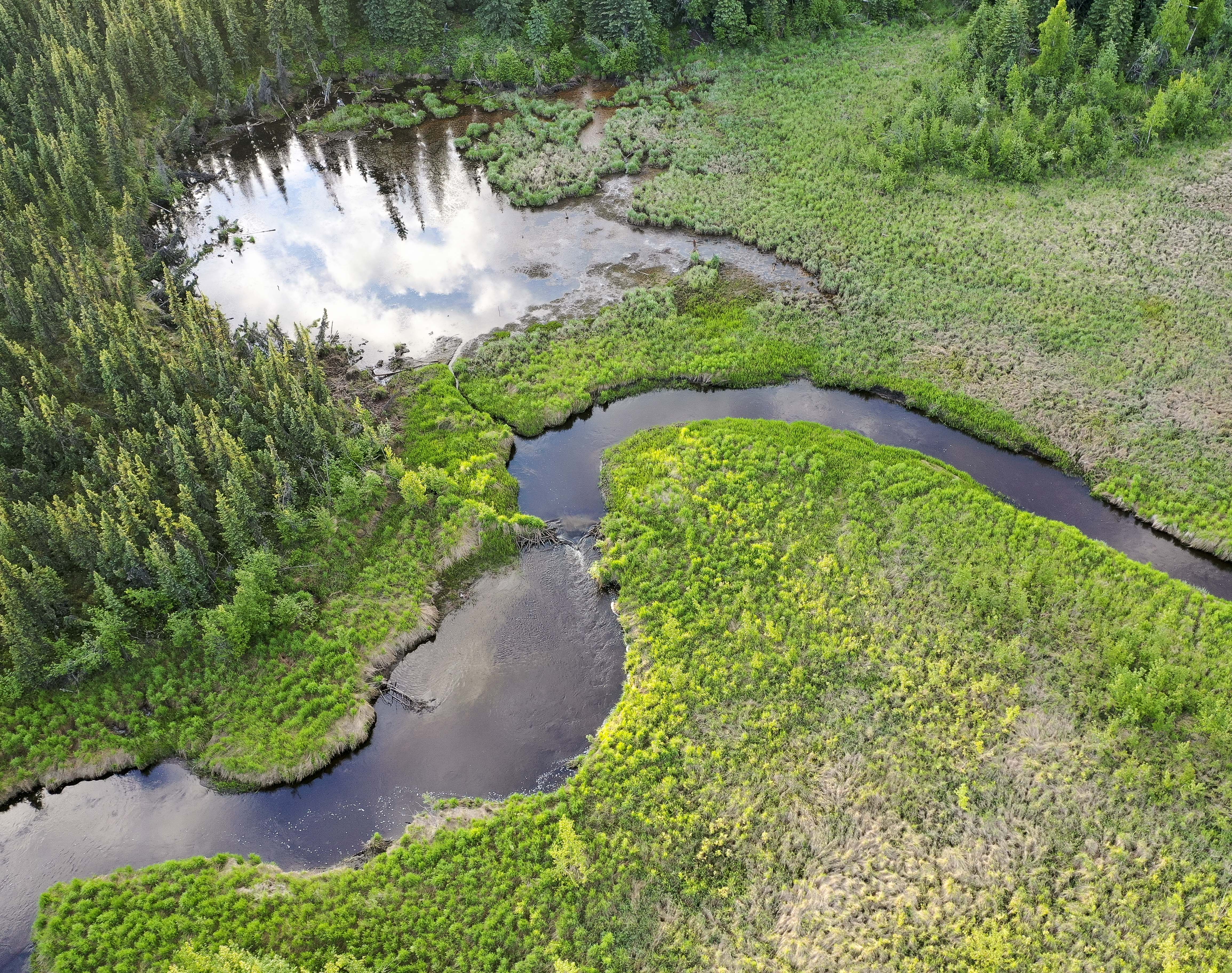 A view from above of a beaver dam on Goldstream Creek near Fairbanks. Photo by Ken Tape.