For more than 40 years, the UAF Geophysical Institute has been recognized as a leader in volcanology research in Alaska and beyond. Alaska is home to 54 historically active volcanoes, which provides an unparalleled natural laboratory for research in volcanic processes and hazards. The Volcanology group brings together different research disciplines to better understand active volcanic processes, develop and implement tools for monitoring, and train the next generation of researchers through graduate and undergraduate research and mentoring.

Volcanology facilities at the GI comprise geophysical networks, satellite receiving facilities, experimental petrology and also include the Advanced Instrumentation Laboratory in the UAF College of Natural Science and Mathematics.

The GI is also a partner agency in the Alaska Volcano Observatory. In cooperation with the US Geological Survey and the Alaska Division of Geological and Geophysical Surveys, we track and monitor volcanic activity in Alaska, execute eruption response efforts, and undertake long-term research projects to understand volcanic processes and help mitigate the effects of volcanic eruptions. GI graduate students have the unique opportunity to work as part of AVO, participating in both science- and hazards-driven studies in the public interest worldwide. 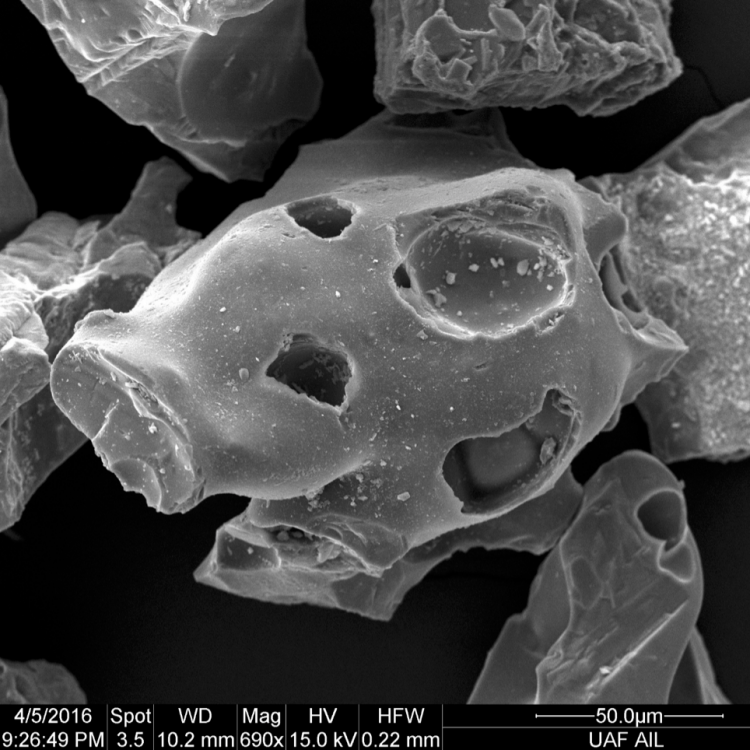 Volcanic eruptions produce rocks and minerals that record pressure, temperature and timescale information from crustal magma plumbing systems. Geological studies of recent eruptions can be used to assess eruption hazards, eruption histories through stratigraphy and tephra studies, and to collect samples for lab analyses and/or experiments. Petrology, geochemistry and experimental petrology studies of recent eruptions in Alaska provide models of magma storage and transport in the crust that can be used to inform geophysical monitoring data, improve our understanding of individual volcanic systems and improve our ability to forecast possible eruptive outcomes from volcanic unrest. We use studies of natural rock sample petrology and geochemistry using state-of-the-art instrumentation in the UAF Advanced Instrumentation Lab, combined with experimental petrology methods in the UAF Experimental Petrology Lab, to improve our understanding of the inner workings of active and potentially hazardous volcanoes in Alaska and elsewhere. 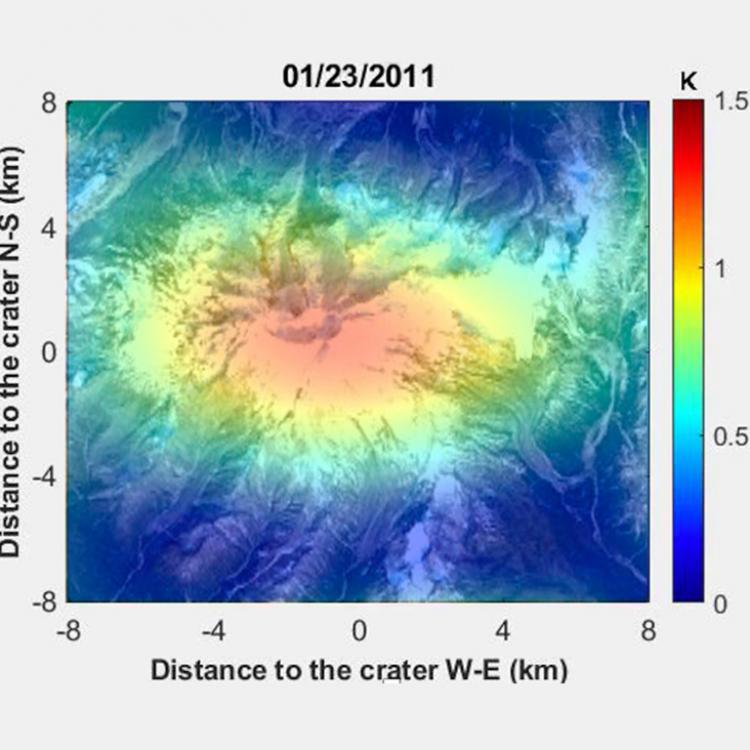 Physics- and data-based models are crucial to link the geophysical, geological, and geochemical data recorded at the surface to the subsurface processes controlling the dynamics of the solid earth. UAF researchers integrate ground-based and space-borne data with: (i) theoretical, numerical, and experimental approaches that combine fluid dynamics, rock mechanics, heat transfer, chemical diffusion, and digital image analysis; and (ii) big data studies that combine classical statistics and artificial intelligence techniques. Our goal is to understand volcanic processes in Alaska and elsewhere, and derive new process-based and data-based methodological frameworks to anticipate the behavior of volcanoes. Key research questions include: What set of observables must be combined to better read into the warning signals that precede eruptions? What internal and external processes modulate volcanic activity? What controls magma ascent to the surface, as well as the type and style of volcanic eruptions? 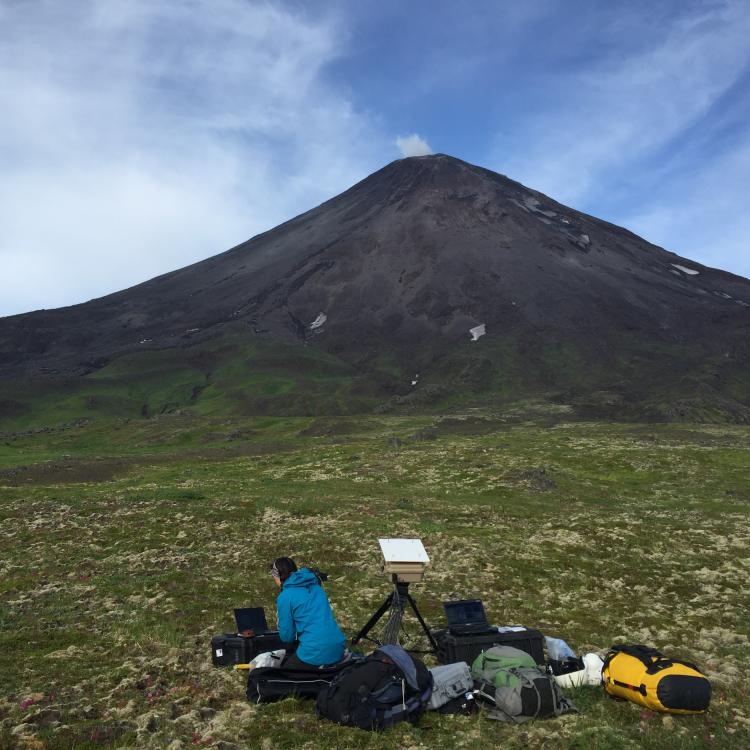 Researchers use measurements of volcanic gas composition and total mass emitted (flux) to provide insights into subvolcanic conditions and volatile cycling. Changes in volcanic gas composition and flux can indicate magma ascent or a change in conduit permeability, which are important eruption precursors. UAF researchers use direct fumarole sampling, in situ plume measurements and ground- and satellite-based remote sensing to characterize background degassing, elucidate volcanic processes and identify changes in volcanic systems throughout the Aleutian Arc and around the world. 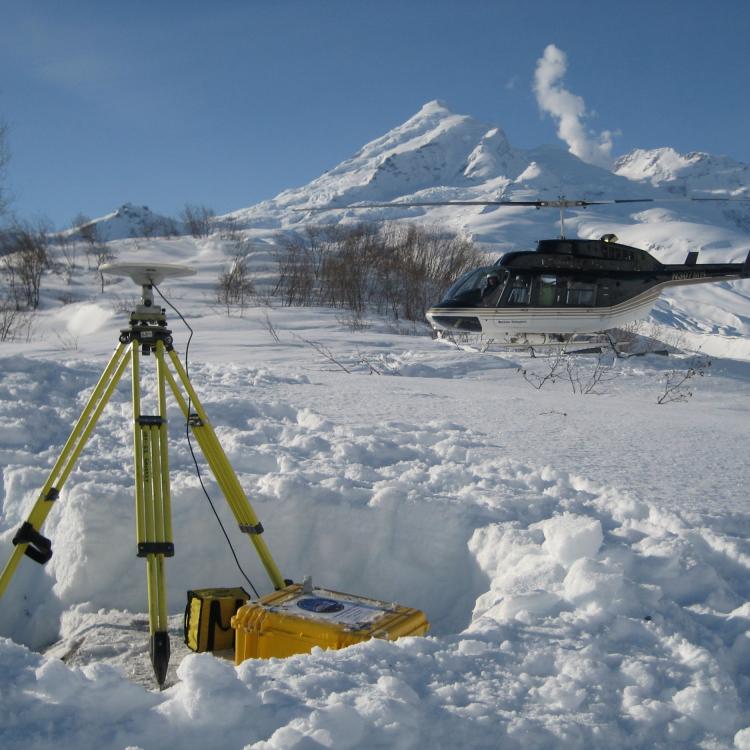 Volcanoes in Alaska display a wide variety of deformation signatures, some subtle and others large and obvious. Pressure changes or mass movements within restless volcanoes produce surface deformation that we can measure using geodetic techniques like GPS and InSAR. We analyze and model these data to better understand the sources of volcanic deformation and how they relate to other signs of volcanic unrest and eruption. Increasingly, we use byproducts of surface deformation measurements to detect and characterize volcanic ash plumes. 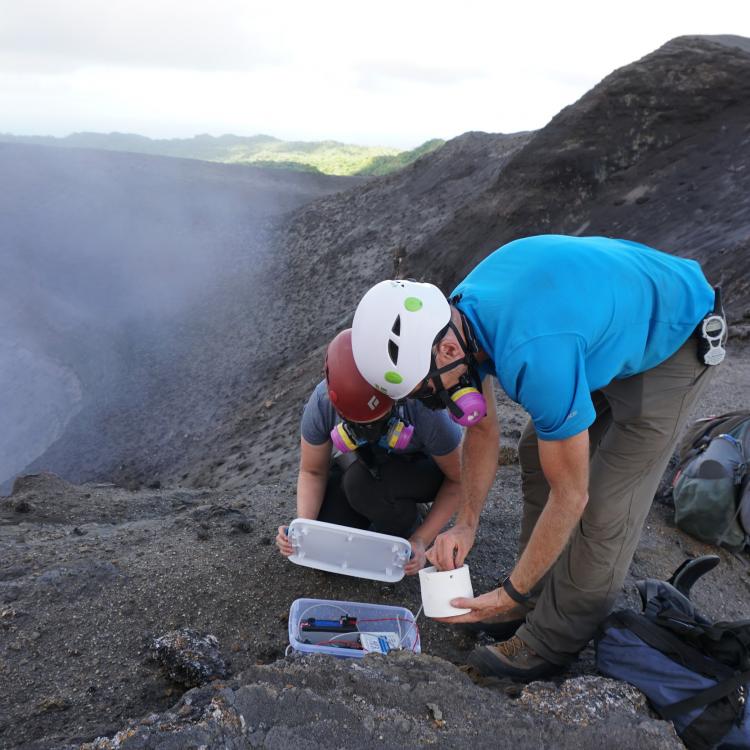 When a volcano erupts it releases seismic energy into the ground and acoustic energy (sound) into the air. GI researchers use low frequency sound, or “infrasound,” to study and monitor volcanic eruptions in Alaska and around the world. Infrasound provides valuable information on eruption dynamics and can be used to detect, locate, characterizeand quantify eruptive activity. Researchers also use infrasound to determine the amount of ash and gas released during an eruption by combining output from numerical models with other measurements, such as gas and seismicity. 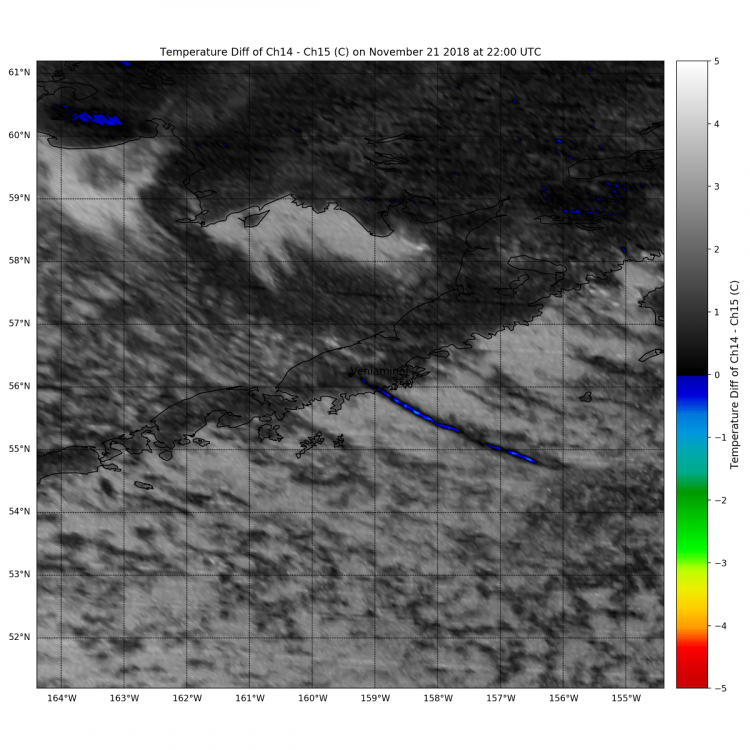 Visible and infrared satellite data of Alaska volcanoes are acquired by polar orbiting and stationary spaceborne sensors. These data are analyzed, viewed and evaluated to locate thermal anomalies, which may indicate volcanic activity or new ash plumes and clouds. Over time, they can be used to observe changes in volcanic activity including an increase in the size of a lava dome, small explosive events, a growing lava flow or the gradual increase in activity of a specific volcano across the region. The faculty and students work together to locate and track volcanic ash plumes and clouds, which may threaten the 70,000 airline passengers and millions of pounds of cargo that fly over the North Pacific region every day. These analyses are a part of student thesis research and new exciting projects that have included gathering additional higher spatial resolution data and the calibration and validation of volcanic ash cloud modeling. 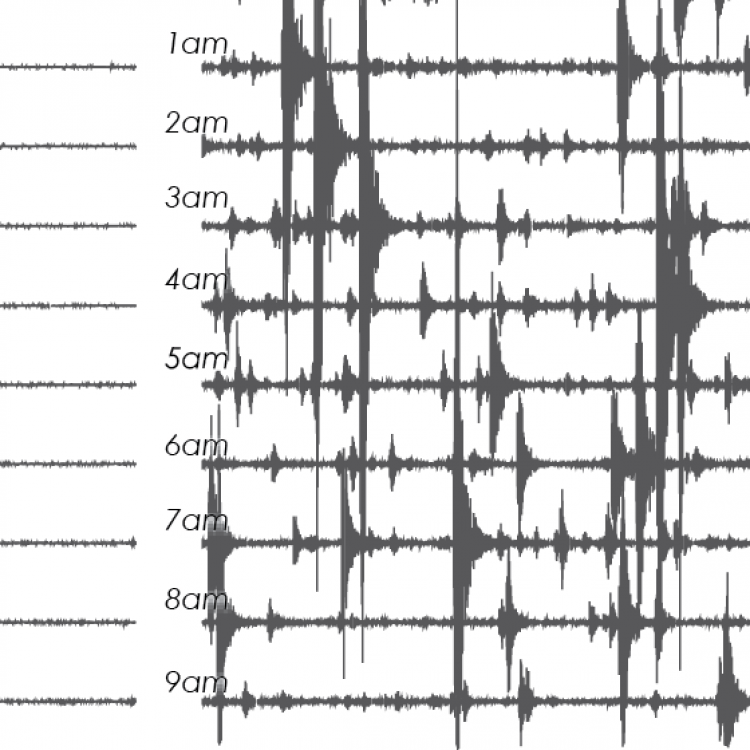 Nearly all volcanic eruptions are preceded and accompanied by earthquakes and/or vigorous ground shaking. Volcanoes produce many other types of “seismicity” as well, sourced by glaciers, erosion and regional tectonics. The broad array of volcanoes in Alaska provides examples of nearly every type of seismic activity. Volcano seismology has been a staple of research at the Geophysical Institute since the 1970s and leverages many assets including the GI Seismology research group, high performance computing facilities and the Alaska Earthquake Center.

The Magmatic and Eruptive System of Mount Erebus Volcano, Antarctica

Mount Erebus on Ross Island, Antarctica, hosts a rarity: a long-lived lava lake. This provides a unique open window into the volcano’s magmatic system. Erebus has been in a continuous state of open-vent activity for at least 45 years. For this project, we will expand a renovated near-summit seismic network on the flanks of the volcano from three to five additional stations. Modern instrumentation and this broader coverage will allow us to look deep into the volcano to better understand its complex structure and reasons for the longevity of this open magma system.

All data from this network will be openly available in near real-time. The real-time data along with an existing catalog of archived data will be analyzed using recently developed methods to generalize, recognize, quantify and catalog eruptive events, which happen quite frequently in the form of small gas explosions. The objective of the project is to study the response of the magmatic system to such events and use continuously recorded background noise and eruption signals to infer concurrent structural changes. These seismic investigations into the long-term changes of the volcano, tracking broad phenomena such as the subsidence of Ross Island, will also be complemented by GPS recordings of deformation. 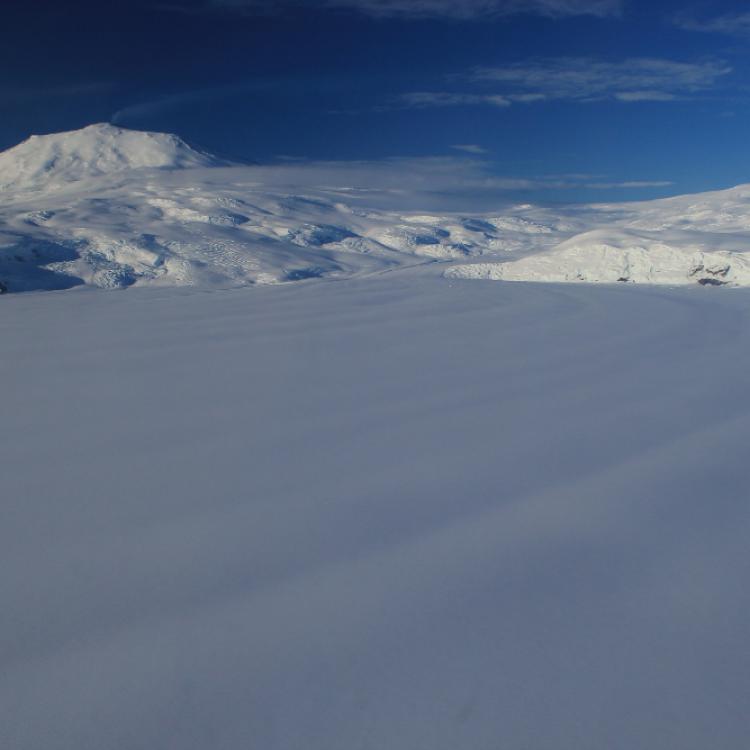 The lab experiments will be performed at the unique facility of project collaborator Ludwig Maximilian University (Munich, Germany) that can reproduce gas and particle jets under controlled source parameters. At Stromboli Volcano, Italy, we will examine jetting from eruptions and determine the jet noise radiation pattern. Observations from the lab and field will be used to interpret and determine source parameters (e.g. jet velocity and flux) for eruptions at both Kilauea and Stromboli, as well as previously collected volcano infrasound data. The results will have significant implications for hazard monitoring at volcano observatories in Alaska and Hawaii, the results will be presented to the general public in those regions, and international collaboration and training will be integrated into the project. 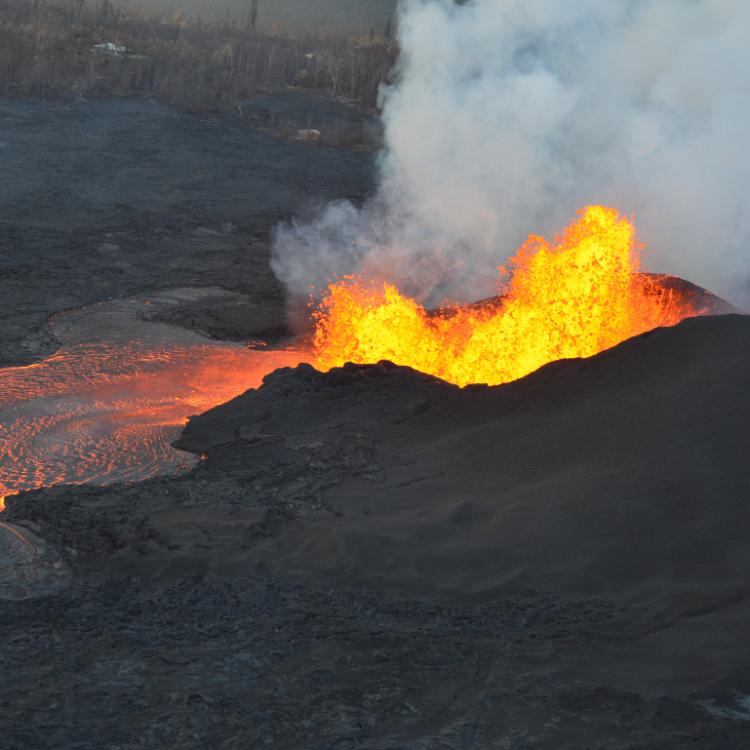 UAF volcanology researchers and collaborators were awarded funding in 2019 for a four-year NSF PREEVENTS-sponsored project to develop eruption forecasting models for volcanoes through multidisciplinary data analysis and synthesis. Research includes data analysis in geodesy, seismology, infrasound, volcanic gas geochemistry, remote sensing, petrology, geochemistry and physical volcanology for eight target volcanoes. A graduate student cohort will work with UAF faculty, staff, postdoctoral fellows and collaborators to synthesize the multidisciplinary data and develop eruption forecasting models. These models will be provided to the Alaska Volcano Observatory to improve their eruption forecasting capabilities and mitigate eruption hazards in Alaska. More information on the project can be found here. 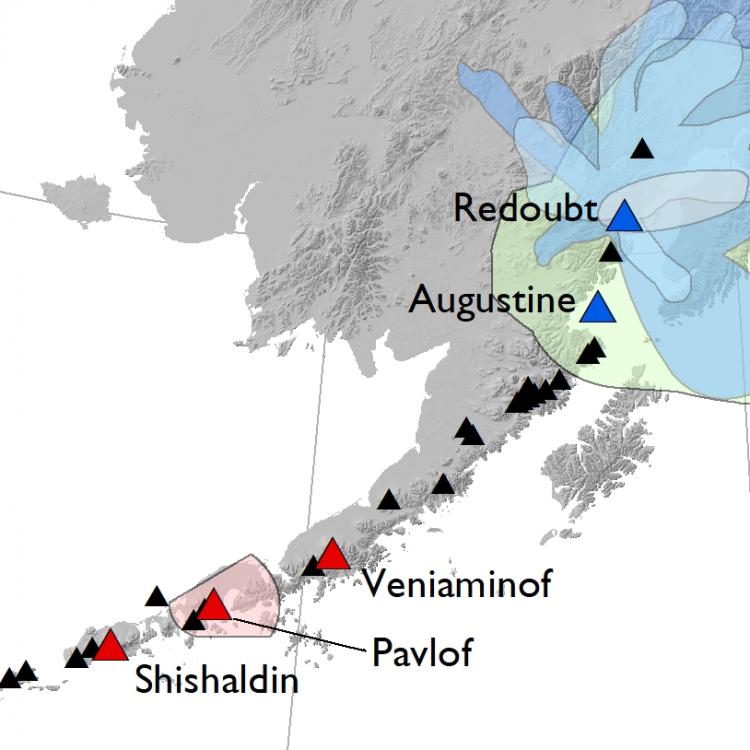