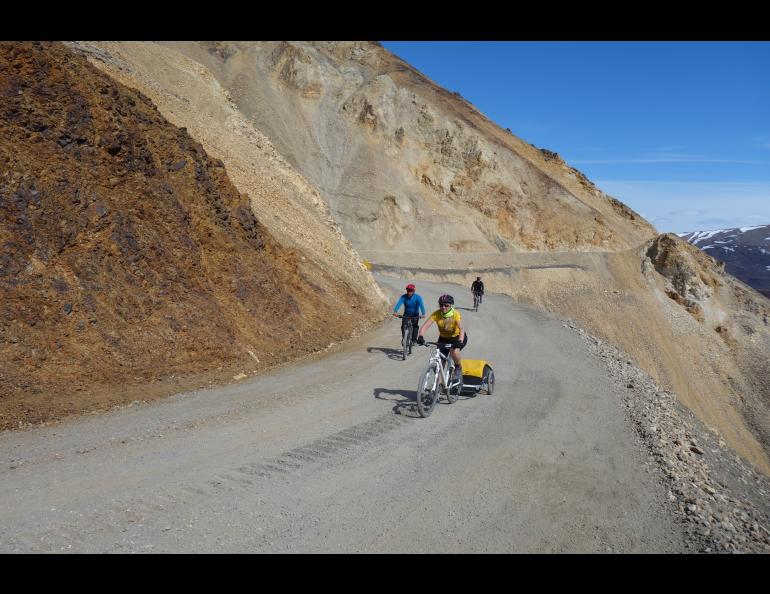 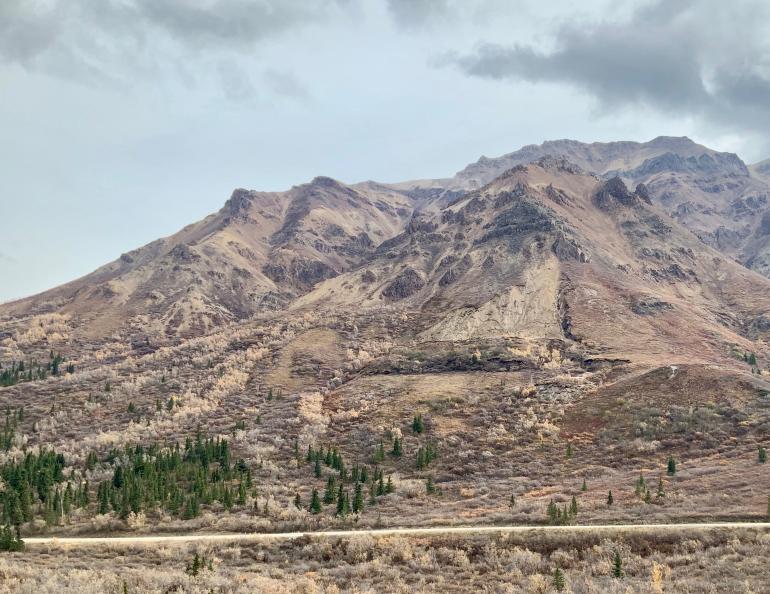 An upper part of a slope that recently failed above the Denali Park Road. Photo courtesy of Zena Robert. 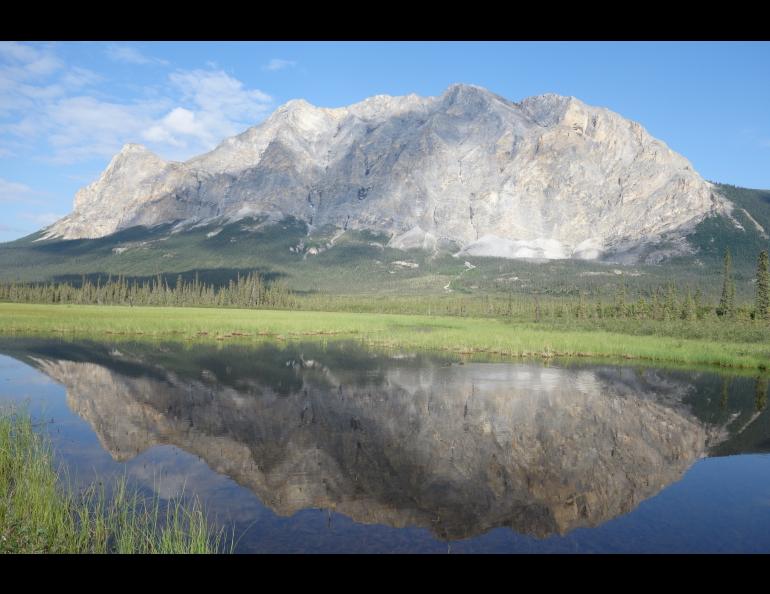 Sukakpak Mountain near Coldfoot, where researchers pulled wood cores from white spruce that showed poor growth in summer 1783, the year of a volcanic eruption in Iceland. Photo by Ned Rozell.

By the summer of 2020, a landslide will bury a portion of the road from the Denali National Park entrance to Wonder Lake. That’s the conclusion of Zena Robert, a UAF graduate student who visited the park in summer 2019.

Last summer, she did a ground survey of giant blobs of frozen hillside that sometimes ooze over the 92-mile road, which workers built from 1923 to 1938.

Robert, who studies geosciences, was one of many thousands of scientists who shared their ideas during the Fall Meeting of the American Geophysical Union, held in San Francisco in December.

She looked at some of the more than 150 “active mass movements” along the Denali Park gravel road, including the rock glacier that flows off Polychrome Mountain at a section of the road known as Pretty Rocks.

“Mass movements are increasing in frequency,” she said. “The Denali Park Road will be majorly impacted in the next few years.”

Park officials issued a press release in December 2019 regarding the Pretty Rocks area, located at mile 45.4 of the road. They noted that the road began dropping there about 2 feet per year in 2004. By 2019, the road there was sinking two inches each day. They said an option for keeping the road open may be a reroute if the Pretty Rocks area can’t be stabilized.

By using tools including dating the lichens on rocks, Robert and her colleagues found that landslides and other downhill flow of some hillsides have happened for thousands of years. They are trying to find out how this warmer era will affect the permafrost-rich Denali Park Road.

“All that movement that’s happening now isn’t unusual,” Robert said. “It’s a recurrence of what happened in the past.”

Alaska white spruce tell a tale of a cold summer: White spruce trees from Alaska seem to have recorded in their cells a great volcanic eruption in Iceland from the 1700s.

Julie Edwards, a graduate student at the University of Arizona, presented her research supporting the notion of Alaska’s Year Without A Summer at the San Francisco conference.

In 1783, Laki volcano spewed sulfur-rich gases that reflected sunlight all over the world. Scientists from Lamont-Doherty Earth Observatory in New York once wrote a paper on a disaster for northwest Alaskans caused by cold temperatures that followed the Laki eruption. Citing Native legends, the scientists said it was possible that rivers and lakes that had recently thawed in midsummer 1783 might have refrozen shortly after, due to the volcano reflecting the sun’s warmth back to space.

The Laki eruption started June 8, 1783 and continued until Feb. 7, 1784. The eruption killed 60 percent of the livestock on Iceland due to animals ingesting fluorine the volcano emitted. Twenty percent of Icelanders died in the famine that followed.

Edwards looked at core samples from white spruce trees living in the wilds of Mancha Creek, which flows into the Firth River near the Alaska/Yukon border, and growing on the flanks of Sukakpak Mountain, near Coldfoot.

“1783 looks weird,” she said in San Francisco. The early-season growth of the trees seemed normal, but Edwards noticed the trees did not produce a thick cell wall at the end of the growing season, as they did in every other year.

“That might be because of a temperature decrease and a dimming of the light,” she said of the late summer of 1783. “The trees might have thought the growing season was over.

The birds are all right: Bird biologist Susan Sharbaugh contacted me about the physics of 40 below column that ran a couple weeks ago. She said not to worry, when you stop feeding birds even in the extreme cold, they will be OK:

“The chickadees have been caching since August,” she said. “They have lots of stored food to get them by. The redpolls are living in a birch-seed pantry. Lots of food available. And they have wings. They will go to where there is food, either your neighbor's feeder or where the conditions are better.” 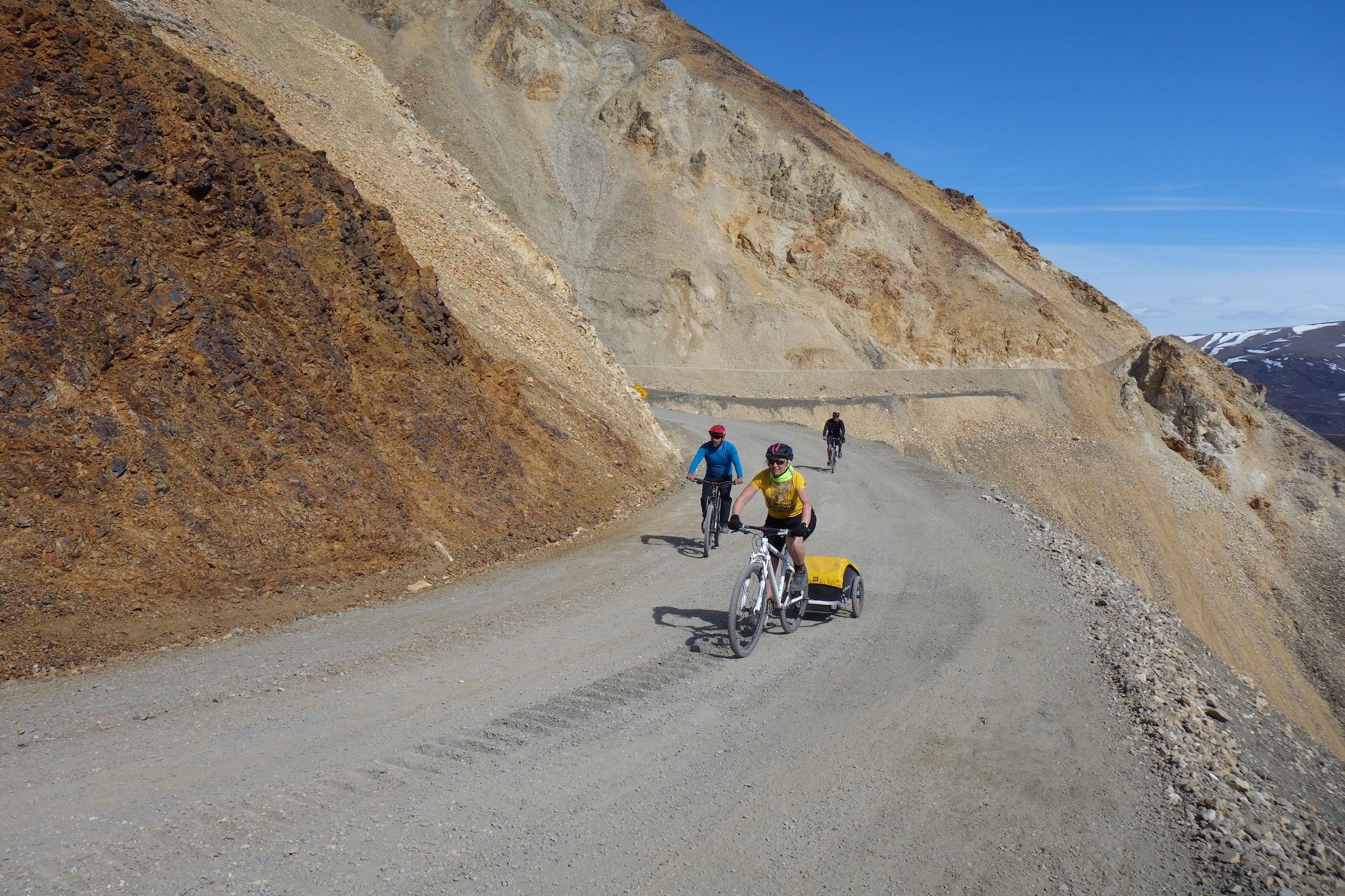 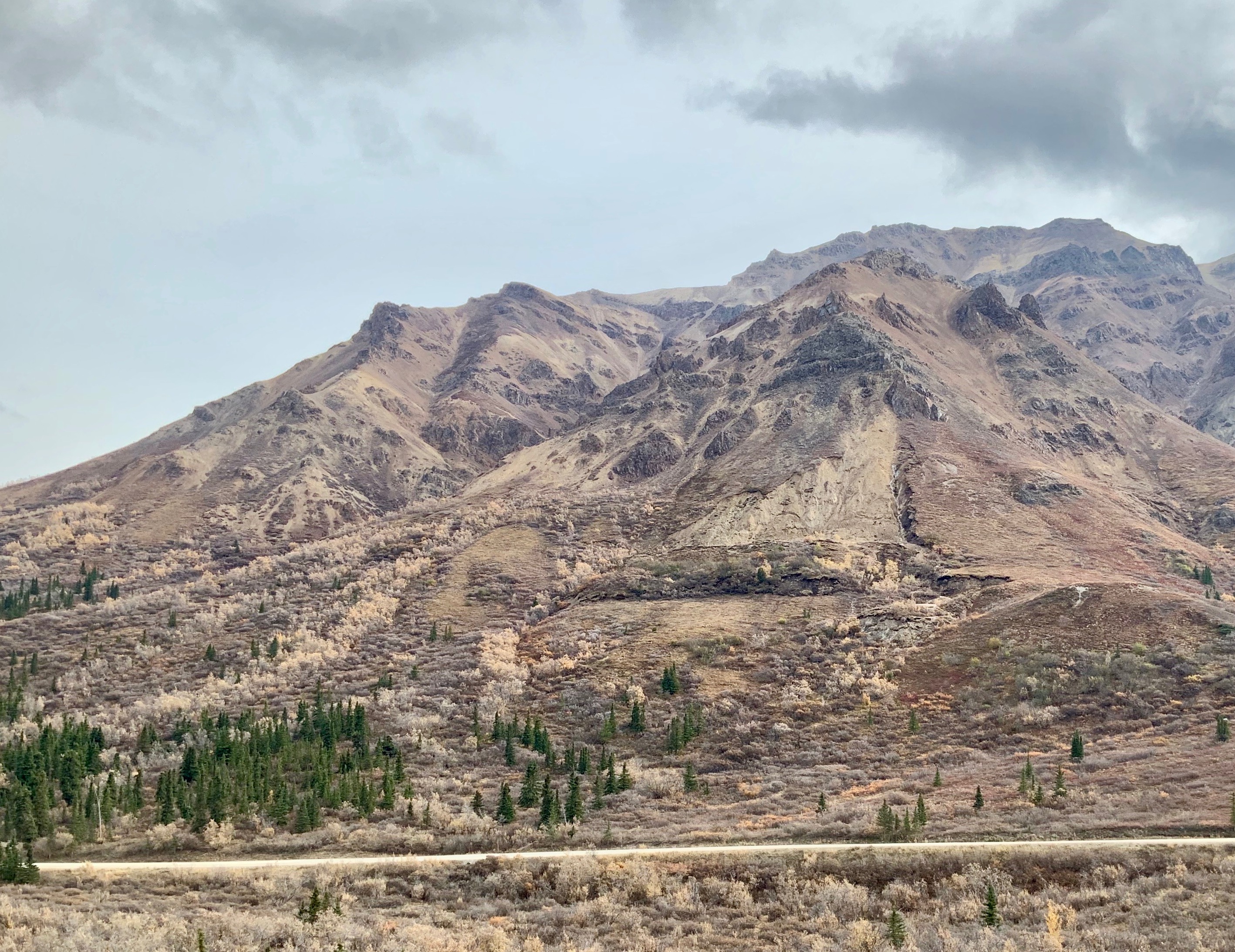 An upper part of a slope that recently failed above the Denali Park Road. Photo courtesy of Zena Robert.

Sukakpak Mountain near Coldfoot, where researchers pulled wood cores from white spruce that showed poor growth in summer 1783, the year of a volcanic eruption in Iceland. Photo by Ned Rozell.