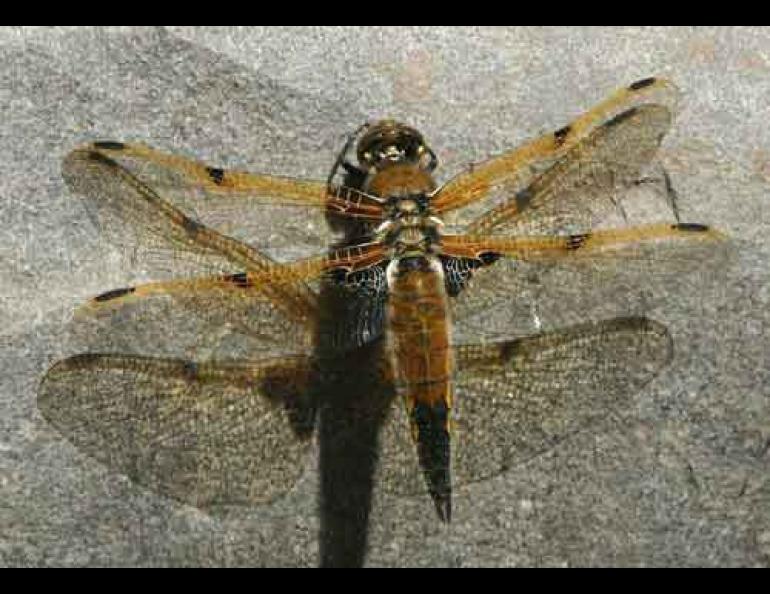 An energetic campaign by students from the Auntie Mary Nicoli Elementary School in Aniak, Alaska declared a state insect in 1995. The winner was the four-spotted skimmer dragonfly. It mauled the mosquito. It battered the butterfly. And it bested the bumblebee in a tight contest to be the Last Frontier’s official insect.

Dragonflies, also known in some parts as mosquito hawks, horse stingers and devil's darning needles, dart through the Alaska air, tiny helicopters in search of mosquitoes and other prey. But the dragonfly is a superior flying machine to anything we humans have come up with. Dragonflies can stop on a dime at 35 miles an hour, fly backward, and cut turns that are too abrupt for any human pilot to stomach.

Aerospace engineers at the University of Colorado once set out to learn some of the secrets of the dragonfly in pursuit of a better flying machine. The late Marvin Luttges, along with then-graduate student Mark Kliss and others, tethered dragonflies inside a wind tunnel to study their wing movements.

Wind tunnels are by no means the greatest obstacle dragonflies have faced in their 300 million years on Earth. Today's dragonflies differ little from their ancestors, except their wingspan is no longer the same as a raven's. They hatch into nymphs from eggs their mother laid in water, and become aggressive predators that ferociously gobble other insects, tadpoles and fish fry. Eventually they climb out of the water onto a plant stem or land, sprout four wings, and begin their lives as efficient airborne hunters that can spot a mosquito at 40 yards.

Mankind has yet to produce a wing like those sprouting from dragonflies. Measuring about two inches long and shaped like a butter knife, the wings are composed of a network of tubular veins coated with a transparent coating of chitin, the light, resilient material that makes up the external shell of many insects.

Unlike more recently evolved insects, dragonflies can't fold their wings back, as can butterflies or damselflies, which look like small dragonflies but have bugged-out eyes that make them look like a ball-peen hammer with wings. The easiest way to tell these cousins apart is that a resting damselfly folds its wings, while a dragonfly's wings stay extended to its side.

After capturing dragonflies (helped by the observation that the insects always take off at a 45-degree angle when startled), the Colorado researchers refrigerated the dragonflies to slow them down, then photographed them flying in a wind tunnel, adding nontoxic smoke to the wind to see how the dragonflies' wings affected it. By freezing the action on film, the researchers saw something unexpected—the dragonflies twisted their wings on each downstroke. This created whirlwinds, which made the smoke curl off the top of their wings. The whirlwinds cause air to move fast over the upper surface of the wings, creating less air pressure there and giving incredible lift.

By using this unsteady airflow, as opposed to the steady airflow man-made aircraft use, dragonflies generate enough lift during certain parts of their wingbeat to keep 15-to-20 times their weight in the air. That's an efficient flying machine.

In a 1995 sponsor statement for Alaska House Bill 239, Alaska Rep. Irene Nicholia stated a reason the dragonfly was more worthy to represent the state than the mosquito, which came in second by 879 votes when ballots were tallied from every public school in the state:

"The dragonfly's ability to hover and fly forward and backward reminds us of the skillful maneuvering of the bush pilots in Alaska."

Maybe someday we'll have an aircraft as efficient as the Alaska state insect. If only Super Cubs ate mosquitoes. 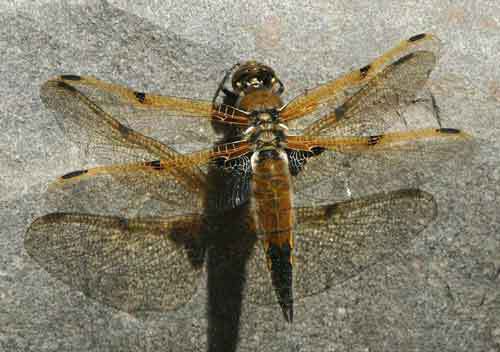