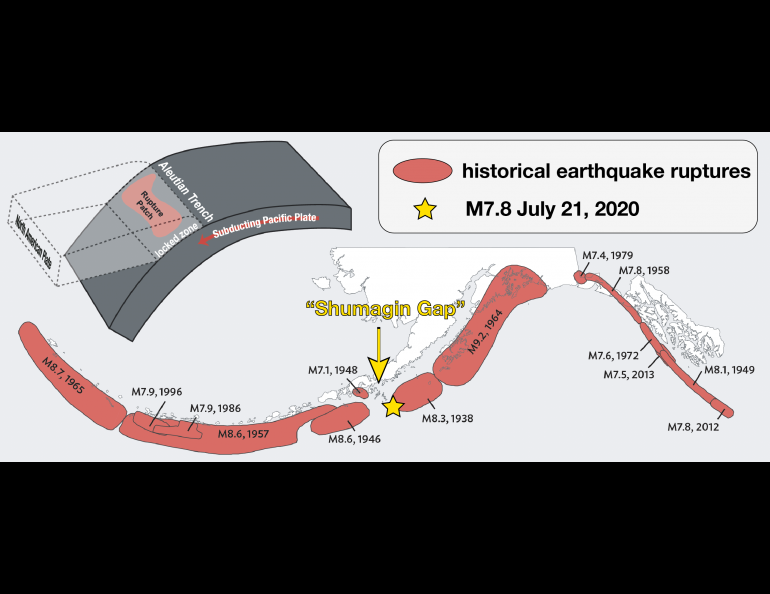 All the large recent earthquakes on the Aleutian Subduction Zone, including the magnitude 7.8 in the “Shumagin Gap” that occurred July 21, 2020. Graphic courtesy Alaska Earthquake Center.

Late in the evening of July 21, 2020, State Seismologist Michael West heard a text alarm. His phone informed him of a large earthquake beneath the ocean, just south of the Alaska Peninsula, about 60 miles southeast of the village of Sand Point.

To West’s relief, the magnitude 7.8 earthquake that happened at 10:12 p.m. Alaska time did not cause a damaging tsunami. Reports of 6-inch waves on the shores of Sand Point were among the highest recorded.

West and his colleagues at the University of Alaska Fairbanks Geophysical Institute were still awash in data one day after the event. But he was quick to point out a scientific paper written by the first Alaska State Seismologist, John Davies, in 1981.

In it, Davies and his coworkers proposed a “seismic gap” just south of Sand Point. There, they wrote, was a swath of one of the world’s great subduction zones that had not ruptured in a long time. It was perhaps due.

Davies made his prediction after field campaigns in the 1970s, during which he and his coworkers had installed seismometers near Popof Island, upon which the village of Sand Point (population 1,140) sits.

“From 1938 to 1965, almost the entirety of the Alaska subduction zone ruptured,” West said. “There were only two places that didn’t rip — one in the Yakutat area and another in the Shumagin Islands (where the July 21, 2020 earthquake occurred).

“Here, you have this 1981 paper that says you’ve ruptured everything except these sections, and that’s where you should expect the next big earthquake.”

Subduction-zone earthquakes are the largest and most destructive on Earth, West said, citing the 1964 Good Friday and 2011 Tohoko earthquakes as examples. He described the Aleutian Subduction Zone, which is responsible for the Aleutian Islands’ existence, as follows:

“The Pacific Plate is careening northwestward a couple of inches each year into the stronger North American Plate,” he said. “This forces the Pacific Plate to thrust down under Alaska. Major earthquakes happen at the boundary where these two plates rub together.”

John Davies, who wrote the paper predicting an earthquake like the one that happened Tuesday night, was elected to the Alaska State Legislature in 1993. He then had to resign from his position at the Geophysical Institute, where, like West, he was the state seismologist.

Davies’ doctorate work, executed in Skwentna, Alaska, helped prove the newish theory of plate tectonics, in which scientists like his mentor David Stone had argued that Earth’s crust is composed of colossal blocks shoving into one another. Davies showed that the Pacific Plate was indeed diving deep beneath Anchorage, and reached almost to Denali.

After turning to politics, Davis never went back to seismology.

The day after the 2020 earthquake, he and his wife Linda Schandelmeier were making kimchi from Napa cabbage they had harvested from their garden in Fairbanks.

Reached by phone, Davies said he was happy to hear that his research of decades ago was suddenly relevant.

“That would be really gratifying if that turned out to be true,” Davies said.

West said the shadow of aftershocks from the earthquake were enough for him to believe that a significant portion of the “Shumagin Gap” had ruptured, and was perhaps not just some quirky section that slips quietly without major earthquakes.

Davies, who as state seismologist had a duty to find the areas of greatest earthquake risk and advise about buildings codes and warn of tsunami hazards, said large earthquakes somewhat remind him of current times.

“Earthquakes are like viruses — the really big ones come along once in a lifetime, if at all,” he said. “We have these hazards that occur with such a long time between them. It’s hard to get people to pay attention.”

All the large recent earthquakes on the Aleutian Subduction Zone, including the magnitude 7.8 in the “Shumagin Gap” that occurred July 21, 2020. Graphic courtesy Alaska Earthquake Center.