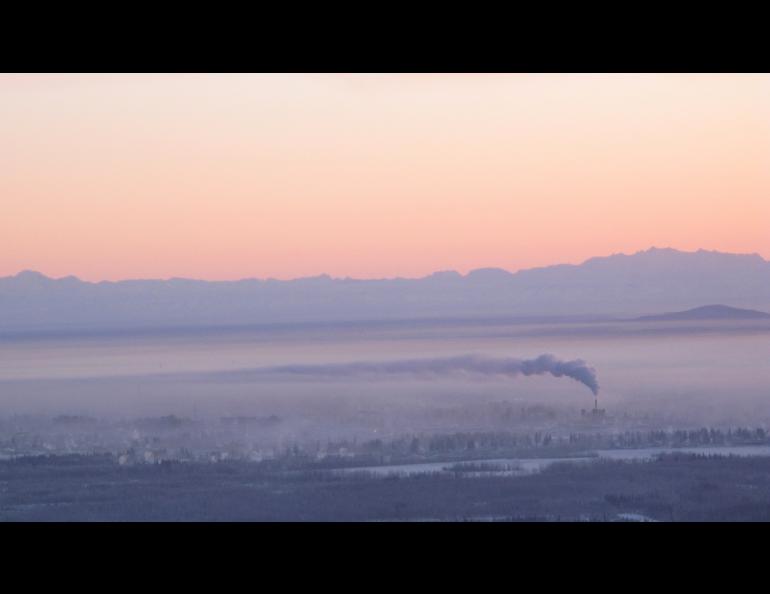 Fairbanks on a cold day in January, 2012. Photo by Ned Rozell.

That August day, when a hired steamship could take them no farther up the Chena River, E.T. Barnette and his wife found themselves deposited on a sandy shoreline in the middle of Alaska.

Gold miners soon found Barnette had sacks of flour, sugar and coffee. Barnette then decided this was a pretty good place for his trading post, one he had hoped to build a few hundred miles away in Tanacross. Alaska’s northern urban center of Fairbanks was born.

Back in 1901, Barnette did not know this river valley has one of the strongest temperature inversions on the planet and some of the calmest winds in Alaska. Nor did he know that a spike in oil prices a century later would inspire so many people to start burning wood to help heat their homes. He did not imagine tiny particles in the air would some day make the city, on its worst days, have air as thick as Beijing’s.

In the “State of the Air 2018” report written by American Lung Association researchers, Fairbanks is America’s most polluted city in the category of particle pollution.

“Fairbanks’s new placement atop the year-round list shows the impact of sustained use of its chief source of particle pollution — burning of wood and other solid fuels to heat homes,” wrote the editors of the report.

Bill Simpson is an atmospheric chemist who lives in Fairbanks and thinks a lot about its air. The UAF Geophysical Institute professor is one of the scientists looking at a northern problem, its causes, and how to solve it. He and a group of international scientists are making Fairbanks part of a study of pollution in cities of the far north.

“We want to see how pollution happens in the cold and dark,” Simpson said. “We’ll compare Fairbanks to cities in Russia to see the similarities and differences. And what’s the role of weather? What are the pollution sources? What’s the chemistry?”

Sunshine, of which the north is in short supply right now, can break down harmful molecules that tend to persist here. Fairbanks also has a powerful temperature inversion that sets up when the sun no longer has any punch, from about mid-November until early February.

Unlike in most places where mountaintops are colder than river bottoms, Fairbanks often experiences the opposite. A covering of snow reflects the meager available heat from the sun. Cold air oozes into the valley and hugs the ground. There are no winds, in part because a crescent of hills to the north absorb and deflect them. On calm, cold days, hilltops can be 30 degrees warmer than the lowlands.

When the temperature inversion sets up and the air is biting cold, people tend to fire the 12,000 wood stoves within the Fairbanks North Star Borough. People burn wood in Fairbanks because it is cheaper than fuel oil, it’s a renewable resource that can be enjoyable to gather, and it releases an even, pleasant heat.

When burned, birch, spruce and aspen logs release particles smaller than 2.5 microns, tiny enough to get past the natural filters in our noses and throats and travel deep into our lungs.

“It’s a health-based standard,” Simpson said of the particulate limit of 35 micrograms per cubic meter set as the National Ambient Air Quality Standard and recorded by sensors throughout the city. “We should try to get there because we want the air to be breathable.”

In studies the editors cited in the American Lung Association report, doctors found that breathing in the tiny particulates causes increased deaths in infants and young children, more heart attacks for the elderly and people with heart conditions, more severe asthma attacks, and inflammation of lung tissue in young, healthy adults.

While coal-burning power plants, cars and trucks emit their share of tiny PM 2.5 particles, the stacks of the power plants release much of their exhaust above the inversion layer, which holds pollutants below treetop level.

“Five feet above the ground is what we’re concerned with,” Simpson said. “During strong inversions, most of the power plant emissions are not making it to the ground.”

While Simpson and his colleagues will deploy new technology like unmanned aircraft to sample the Fairbanks particulates, the largest source here has already been diagnosed.

In nearby North Pole, which has an even bigger problem, three-quarters of the particles are coming from wood stoves, Simpson said.

Simpson thinks Fairbanks residents can solve the problem by volunteering to use an alternate source of heat, like oil-burning stoves, on the worst days. Residents can receive alerts via text or emails that would inform them during days of severe inversions. Technicians at the Alaska Department of Environmental Conservation’s Division of Air Quality issue the alerts.

“There’s something like 30 days in winter with bad conditions,” Simpson said. “If people don’t burn on no-burn days, I think the problem is solved.” https://fnsb.alertmedia.com/public 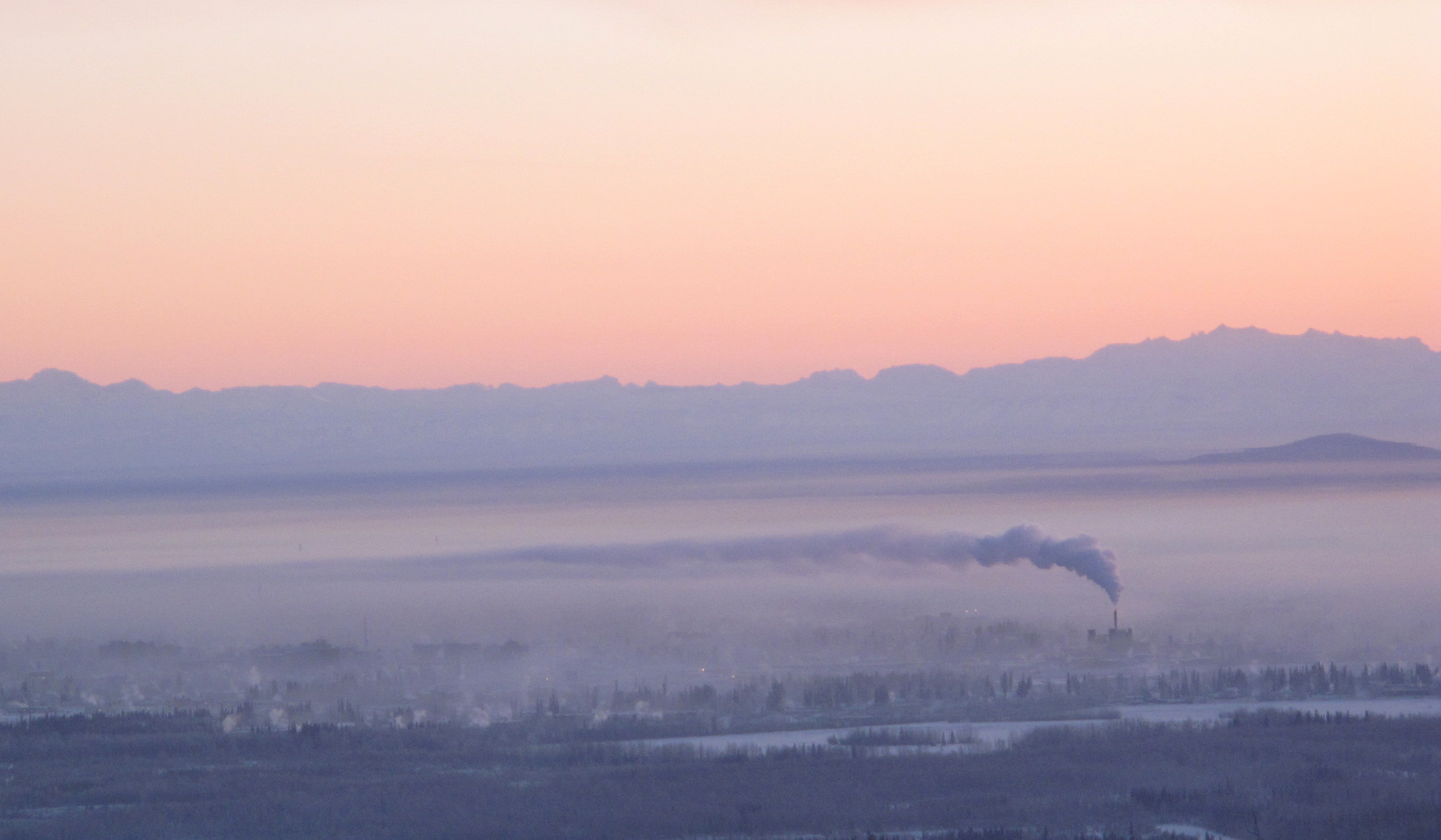 Fairbanks on a cold day in January, 2012. Photo by Ned Rozell.