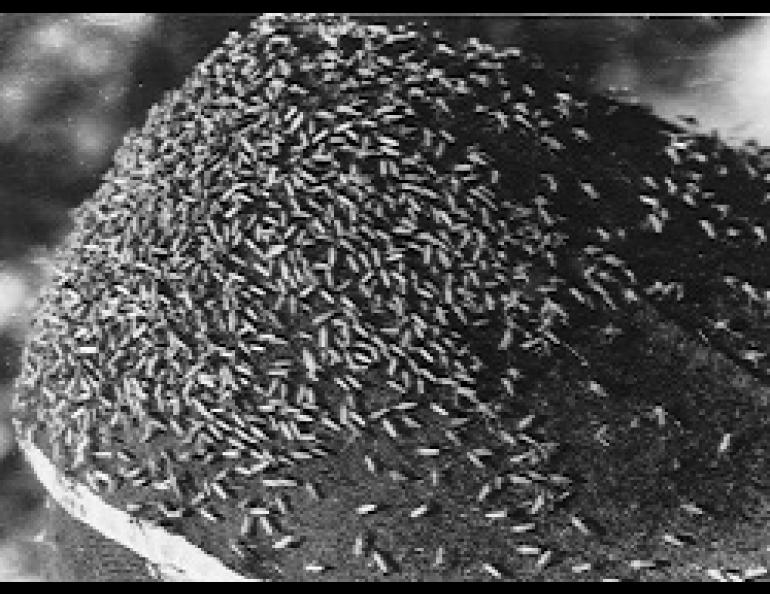 One of the more blood-chilling sights of spring in Alaska: the reappearance of the mosquito. First come the big, slow-moving snow mosquitoes, which overwinter as adults, followed by the smaller but more active swarms shown here.

How Mosquitoes Overwinter in Alaska

We will shortly witness hordes of mosquitoes emerging from overwintering sites throughout Alaska. Different species of mosquitoes will become active at various times throughout the summer depending on where and in what particular life stage they spent the winter. Mosquito activity following spring break-up is also regulated by the temperature of the water in which the eggs have been deposited. A warm April and May with average precipitation followed by a warm dry month of June is ideal for mosquito development.

The mosquito life cycle consists of eggs, larvae or "wrigglers," pupae or "tumblers," and adults. All life stages except adults are aquatic and can occur in a variety of wet or moist places such as ponds, sloughs, standing pools of water, salt water marshes, artificial containers, hollow trees, low depressions of land, and moist areas of fields, bogs, and forests. The flat areas of interior and parts of south-central Alaska are ideal breeding sites because of the abundance of slow-moving and standing water.

The majority of mosquitoes in Alaska spend the winter as eggs within the specific habitat where they will eventually develop into larval, pupal, and adult stages. This means that female adults deposit eggs during late summer in the habitats mentioned above. These eggs then lie dormant throughout the winter until water temperatures are warm enough for hatching to occur the following spring. Mosquito eggs can sometimes lie dormant for several years, particularly when the eggs are deposited in depressions that are not flooded with water each year.

A few species of mosquitoes overwinter in either the larval or pupal stages. The largest of Alaskan mosquitoes, Culiseta Alaskaensis or the snow mosquito, overwinters as an adult under the snow, usually in leaf litter, beneath loose tree bark, or in dead tree stumps. This is the first species to emerge each spring, usually from mid- to late April.

Many insects including mosquitoes survive temperatures below freezing in Alaska. This freezing tolerance is accomplished by two different biochemical processes. In the first process, the insect's body water is replaced by glycerol, a type of carbohydrate, which acts as an antifreeze and keeps the body cells from rupturing when temperatures reach the freezing point. In the second process, called "supercooling," the insect's body temperature is lowered below the freezing point without its fluids solidifying. (The supercooling phenomenon is similar to what occurs in making fudge , when the cooling syrup is ready to crystallize, but cannot start doing so until it is disturbed or a sugar crystal drops in.) The insect's body temperature is regulated downward as the environmental temperature decreases to a point at which mortality occurs; the insect dies at this supercooling point. During mild winters the supercooling point of many Alaskan insects is never reached in their hiding places; therefore, these insects continue to survive at high levels. The supercooling point varies for different species and life stages of insects. For example, spruce bark beetle adults, which overwinter below snow line in the trunks of infested trees, have a winter supercooling point of -13 degrees F. The larval stage, however, has a slightly lower supercooling point of -24 degrees F since it overwinters in tree trunks above the snow line where it is subjected to lower temperatures. 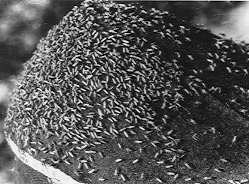 One of the more blood-chilling sights of spring in Alaska: the reappearance of the mosquito. First come the big, slow-moving snow mosquitoes, which overwinter as adults, followed by the smaller but more active swarms shown here.