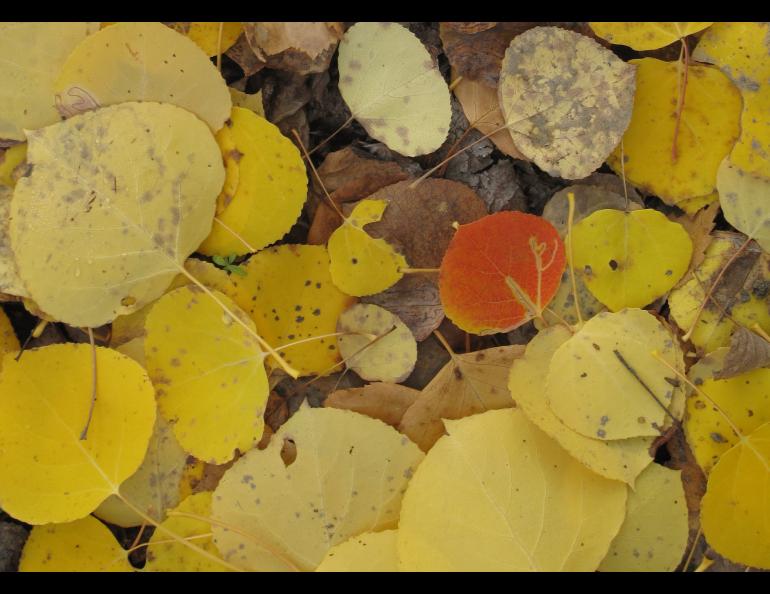 A few aspen trees go their own way, leaves turning red and orange when the majority turn yellow. Photo by Ned Rozell.

Maverick red aspens in a world of gold

Will Lentz, a reader from Fairbanks, asks a question that flares every fall: why do some aspens turn red?

A few scientists from Fort Collins, Colorado, pondered that subject in the late 1970s. Curious about red aspen trees people had noticed for half a century, they studied why these existed amid those with the more common leaf color, yellow.

Before getting to the scientists' results, a quick refresher on why tree leaves change color. Deciduous trees (the broad-leafed ones that drop their leaves in the fall, in contrast to our needle-leaved spruce) are gamblers now folding their hands after a few months of prosperity.

Sensing shorter periods of daylight, trees have quit refreshing their leaves with chlorophyll, the green pigment that helps capture the sun's energy and allows the tree to convert it to the sugars that make it taller and bushier.

Right about now, when a tree reaches its daylight threshold, cork-like cells develop where leaf meets stem. This abscission layer, which later reveals itself as a handsome scar, is an ever-clogging pipeline that restricts the flow of sugars from leaf to tree.

As the tree informs its solar panels their services will no longer be needed, chlorophyll production stops. In mid-summer, chlorophyll was the loudest kid in the family. The parent tree replenished its leaves’ chlorophyll as the sun faded them like colored paper left on the windowsill. The tree's autumn refusal to ante any more chlorophyll allows the quiet pigments in the leaf to express themselves.

These include yellow (xanthophylls) and orange pigments (carotenoids). Reds and purples come from anthocyanins.

Kuo-Gin Chang, Gilbert Fechner and Herbert Schroeder, then at Colorado State University, a few decades ago dropped aspen leaves into a blender and pushed the button. From the solution of liquid leaves, they determined that a sugary red pigment was indeed present in red and orange aspens, but not in yellow aspens.

The scientists hinted that the red occurs on only some trees, meaning it is probably a genetic trait — a red aspen is sort of like a person with red hair. The researchers also wrote that yellow trees remained yellow from year to year but one tree they selected for its redness at the start of their five-year observation was red only for the first year and yellow each following year. And most of those lovely reds and oranges did not endure to carpet the forest floor, fading to bland yellow within a week of falling.

Another intriguing question: in this don't-waste-a-molecule world, why do trees invest in creating pigments other than energy-gathering green? Nobody seems to have answered that, but scientists have speculated that red acts as a sunscreen to keep played-out leaves from getting overexcited by photons. Another idea is that color might also either throw off green-munching bugs or be a tree's way of showing insects its vigor compared to its drab, easy-to-attack neighbor. 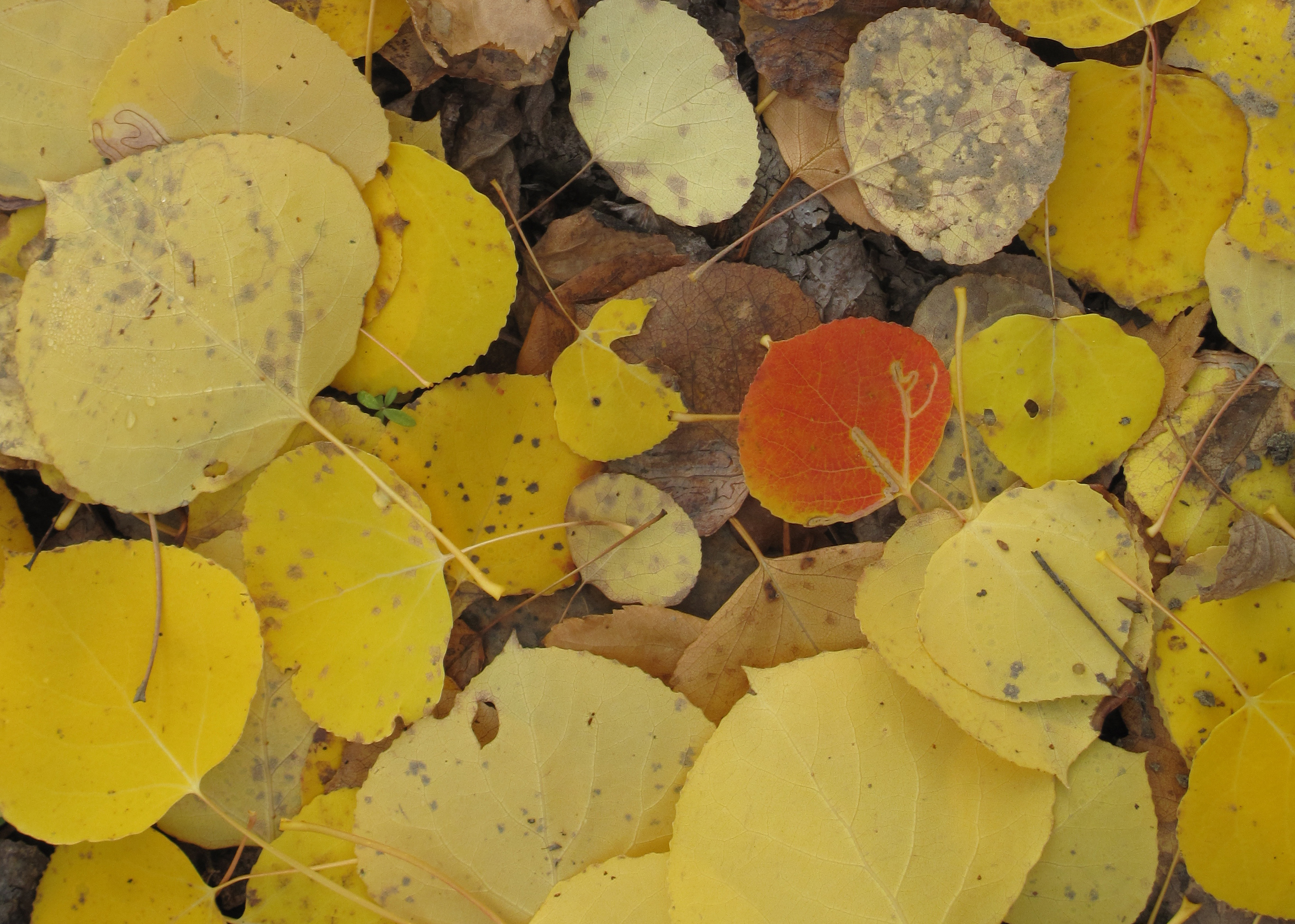 A few aspen trees go their own way, leaves turning red and orange when the majority turn yellow. Photo by Ned Rozell.