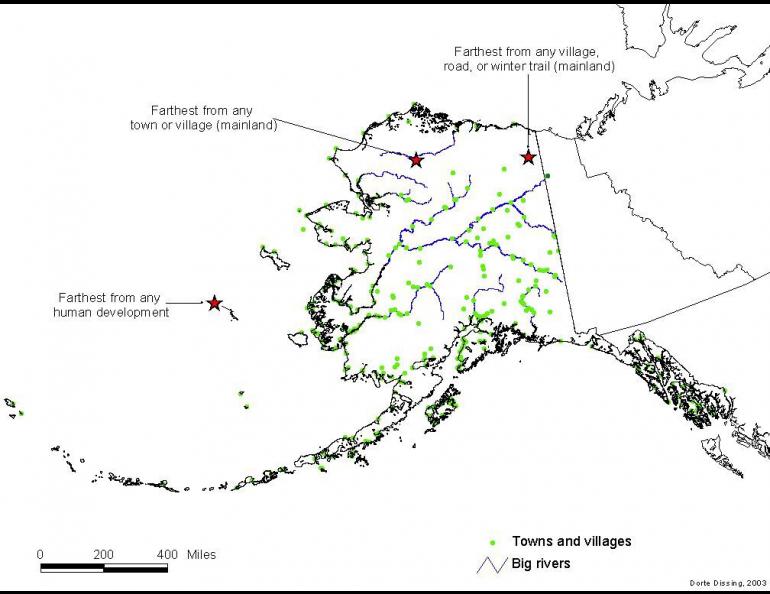 The most remote spots in Alaska. Graphic by Dorte Dissing.

The Most Remote Spot in Alaska

A friend sent me the following quote, from the pages of Hawk’s Rest, a book by Gary Ferguson about a wilderness outpost in Yellowstone National Park:

“Out of the million square miles of basin, range, peaks and prairies that compose the interior West, the farthest it’s possible to be from a road is a trifling 28 miles.”

Richard Forman, a Harvard professor of landscape ecology, once visited a mangrove swamp in the Florida Everglades that he described as the most remote place in the eastern U.S. The swamp was 17 miles from any road.

What’s the most remote spot in Alaska? Dorte Dissing helped me tackle that question. Dissing is a geographer and research assistant for the University of Alaska Fairbanks Department of Forest Sciences. She’s proficient with the use of the electronic mapping system known as Geographic Information Systems. Scientists use GIS to make detailed maps of everything from migration routes used by dark-eyed juncos over Alaska to maps of permafrost, slope aspect, forest type and elevation for road engineers. The possibilities are endless, and they include searching for the most remote place in Alaska.

When my friend first mentioned that the farthest spot from a road in the Lower 48 was less than 30 miles, I didn’t believe her until I looked at a detailed map of the U.S. According to the U.S. Bureau of Transportation Statistics, 3,919,125 miles of road crisscrossed the continental U.S. as of the year 2000. In 2000, Alaska had only 12,823 miles of public roads, according to the same source. That’s less than Vermont, which is 62 times smaller.

Dissing uses a GIS program with a blank map of Alaska to which she can add features, such as rivers, towns, roads, and trails. To begin the search for Alaska’s middle-of-nowhere, she created a buffer zone of increasing mileage around Alaska roads, trails, and villages. The most remote spots appeared as tiny wedges in northwest and northeast Alaska. Other lonely spots were a few Aleutian islands and St. Matthew Island in the Bering Sea.

When she lengthened the buffer zones to 85 miles from villages and trails listed on her GIS program, the most remote spot on mainland Alaska was an upper branch of the Coleen River in the Arctic National Wildlife Refuge close to the Canada border. The hill is about 85 miles from both the villages of Old Crow in the Yukon Territory and Arctic Village in Alaska’s Brooks Range.

Because some of the trails included on her GIS program are historic winter trails over tundra, Dissing dropped Alaska roads and trails for another run of her GIS system. She found that the farthest place from an Alaska village or town in mainland Alaska was a bend of the Etivluk River about 15 miles from its confluence with the Colville River on Alaska’s north slope. The closest villages--each about 120 miles from the river bend--are Ambler to the southwest and Atqasuk to the north.

Though 85 miles and 120 miles allow plenty of elbow room, Alaska’s champion recluse seems to be St. Matthew, which sits alone in the Bering Sea without road, airstrip, or town. The closest village is Mekoryuk, on Nunivak Island off the Yukon River delta. St. Matthew’s nearest neighbor is 209 miles away.

Biologist Brian Lawhead spent a few months studying seabirds on St. Matthew Island in the mid-1980s. He remembered a few long rides to reach the island, one in a Grumman Goose from Bethel and another by chartered boat from Dutch Harbor, 400 miles away.

“I remember sitting there and realizing how far the nearest land was,” he said from his Fairbanks office, where he works as a senior biologist for Alaska Biological Research. “The island is all tundra, not as lush as the Aleutians, with lots of seabird cliffs. It’s a beautiful place.” 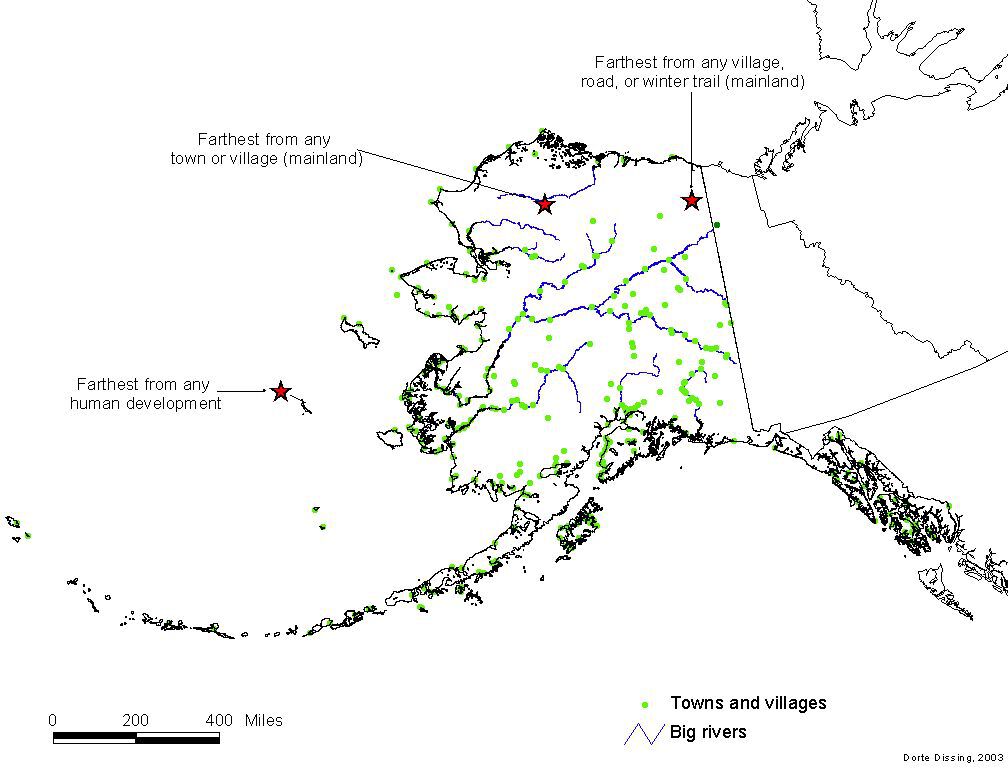 The most remote spots in Alaska. Graphic by Dorte Dissing.