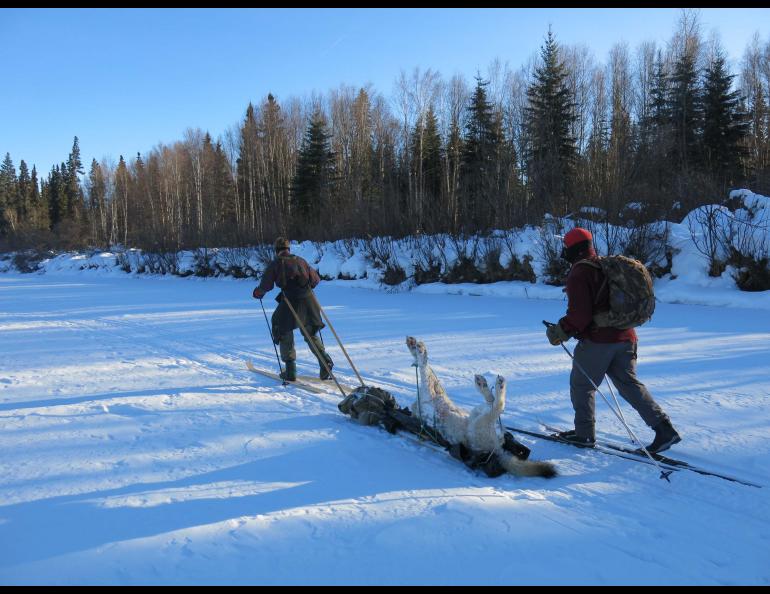 The wolf carcass being towed over the snow.

At the carcass, Tom Paragi levers the wolf — its stiff legs reaching like a dog in full stretch — out of the snowbank and back onto the trail.

Mystery of the South Fork wolf

The wolf is no longer stuck to the trail, as it was when the dog musher drove her reluctant team over it. Now covered with snow, the frozen animal is a few steps away, beneath small spruce trees near the South Fork of the Chena River. The only exposed part of its body — a bushy tail — points to the sky.

Since the musher discovered the dead wolf a few days ago, someone moved the carcass — maybe the trapper who passed the biologists on his snowmachine as they skied here. He discovered the wolf yesterday and was returning today to cut off its head, he said. When the trapper paused to chat, he learned the biologists wanted to retrieve the wolf and have a veterinarian determine how it died.

“You guys can have it then,” the trapper said. “I’ll tell you right now that it was shot — there’s blood on the trail underneath it.”

At the carcass, Tom Paragi levers the wolf — its stiff legs reaching like a dog in full stretch — out of the snowbank and back onto the trail. The body squeaks like Styrofoam and falls with the thud of frozen meat.

Paragi is a biologist for the Alaska Department of Fish and Game. Before inspecting the wolf, his first thought is similar to the trapper’s.

“But if they shot it in the trail, would they just leave it there?” says Paragi’s friend Cam Leonard, along for the recovery.

“This is odd for somebody to shoot it and not salvage it,” Paragi says. “It’s perfectly legal (to shoot it) . . .  but even in self-defense you’ve got to skin it out and bring it in (to the Department of Fish and Game).”

With the cream-color, lifeless wolf in the center of the trail, Paragi and Leonard take a closer look. Mike Taras, an expert tracker and education specialist for the Department of Fish and Game, heads down the trail to look for clues to the wolf’s demise. The seven-mile trail leads to a rental cabin here in the Chena River State Recreation Area, about 35 miles east of Fairbanks.

Stretched out on the snow as it was when the musher came upon it five days earlier, the wolf has feet pads as large as a man’s hand. Its extended legs are surprisingly long. The wolf has perfect toenails the size of an eagle’s talons.

With blue latex gloves on his hands, Paragi fingers a foot-long gash through the wolf’s rear haunch. Something ripped into the carcass and mined the wolf’s internal organs. Paragi suspects a marten.

A hole the size of a cannonball opens at the wolf’s lower ribcage. At first glance it looks like the exit wound from the shock of a mushroomed bullet.

Paragi and Leonard load the wolf to a sled. Because the animal has frozen in an inconvenient position, Paragi sets the wolf on its back and ties it into place.

As Paragi skis back toward his truck with the wolf, a family dog along for the trip jumps into the woods near where the wolf lay. The dog trots on a hidden path of packed snow. Taras follows.

“This trail is strong enough to hold me,” he says.

On the south-facing hillside, Taras finds a half dozen hard, rounded indentations the size of pillows.

“This was a place where wolves were hanging out,” he says.

One half hour later, Taras catches up to Paragi and Leonard on the trail back to the truck. The men pause in the spring sunshine of a Saturday afternoon to wonder aloud what might have killed the wolf. Leonard says when he shoots a moose, the ribs splinter; the wolf’s rib ends are rounded. Taras wonders why there was only a spot of blood on the trail rather than a rich, deep stain.

“It’s looking less like a bullet wound all the time,” Leonard says.

Upon hearing from Taras that a pack of wolves had bedded nearby, Paragi suggests that the fist-size hole in the wolf could have come from where the moose it was trying to kill kicked it, causing a fatal wound. Other creatures like marten could have expanded any slight tear in the hide.

Answers may be available in a few days, when Paragi will deliver the frozen carcass to the Alaska Department of Fish and Game Office in Fairbanks. There, wildlife veterinarian Kimberlee Beckmen will examine it and perhaps find the cause of death.

Anxious to move because he has stripped to his t-shirt and a slight breeze is blowing, Paragi again shoulders his sled harness. To steady the wolf, Leonard skis alongside with his left hand on crossed rear paws that reach as high as his hip. As white-winged crossbills chitter overhead, the wolf’s tail waves on the trail behind the sled, brushing a delicate pattern into the snow.

Next week: the wildlife veterinarian solves the mystery. 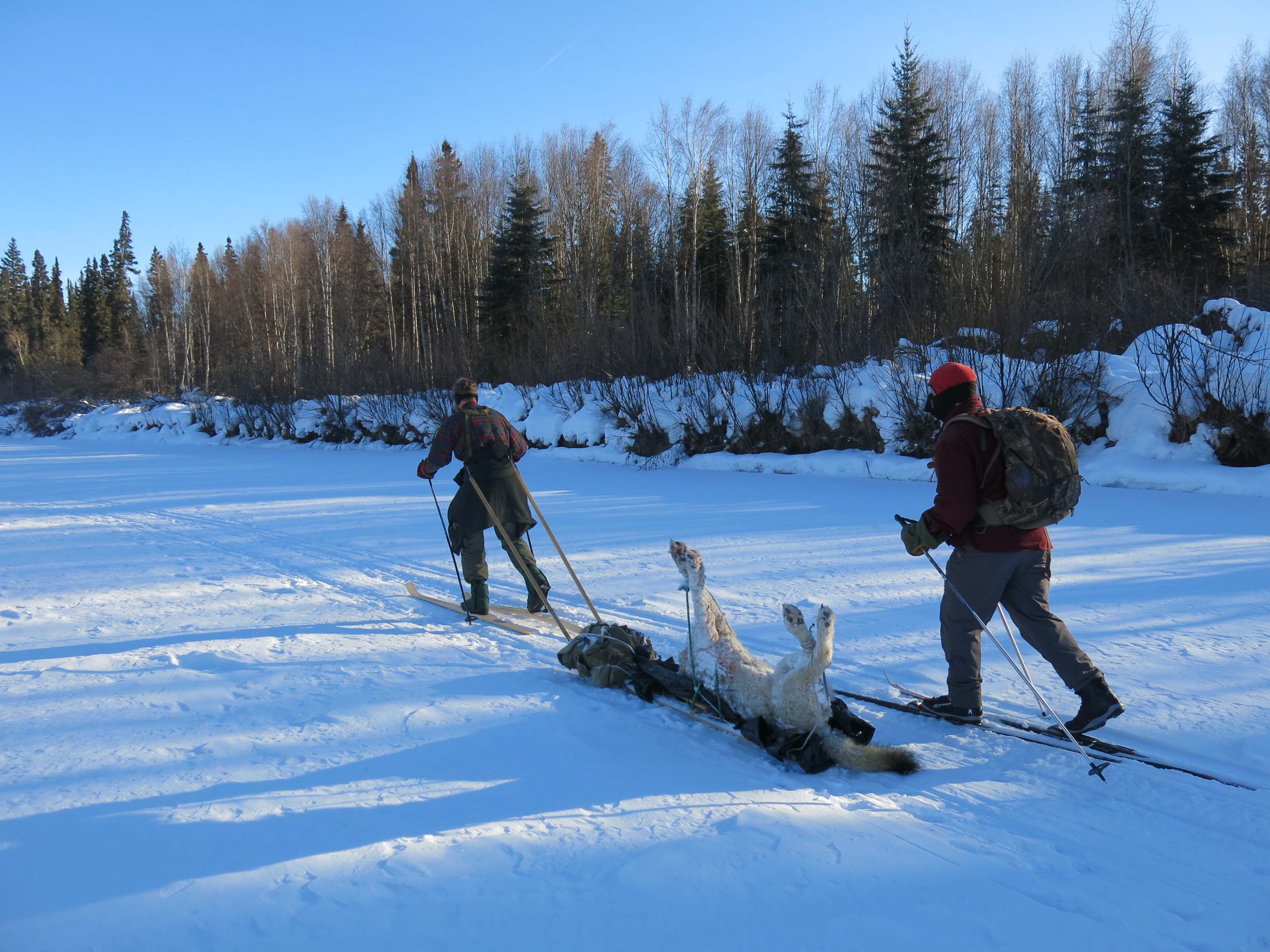 The wolf carcass being towed over the snow. 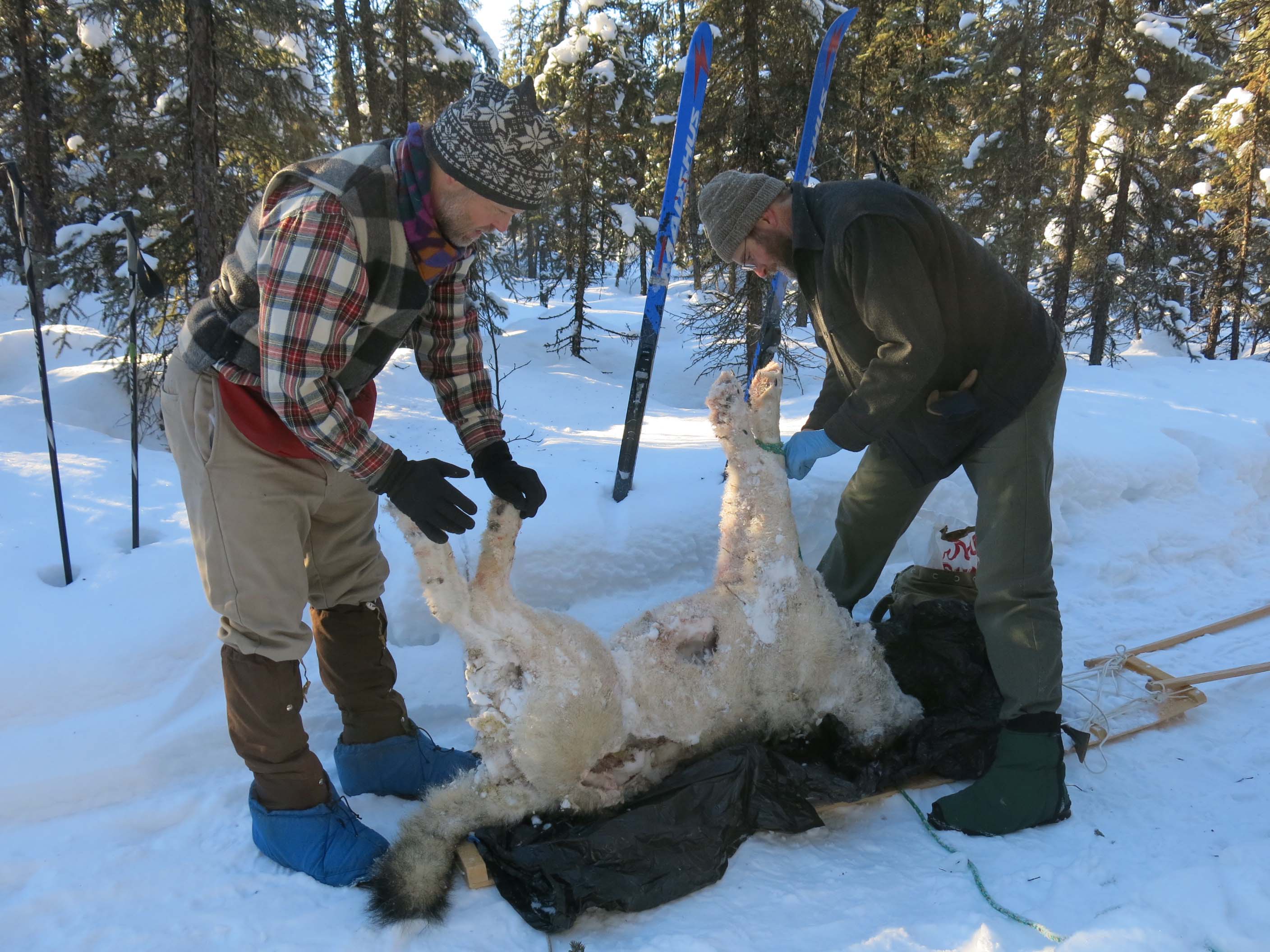 At the carcass, Tom Paragi levers the wolf — its stiff legs reaching like a dog in full stretch — out of the snowbank and back onto the trail.