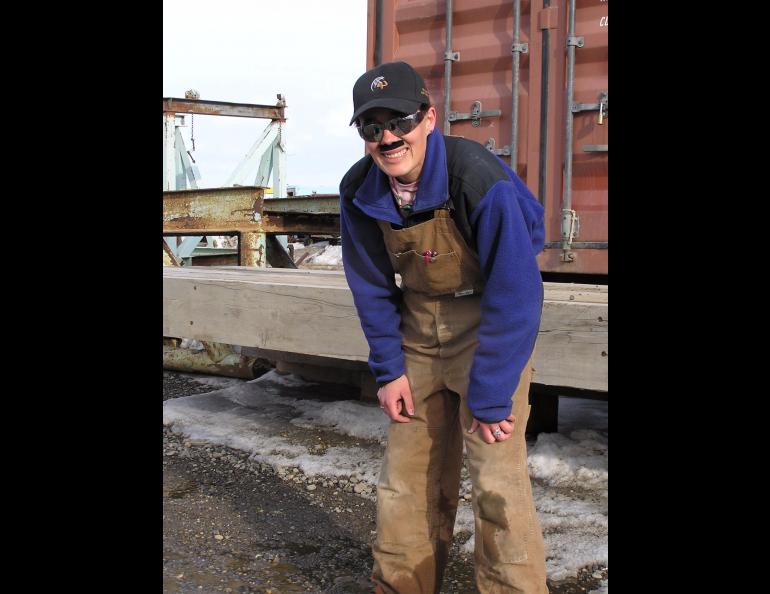 Raven researcher Stacia Backensto disguises herself as an oilfield worker in an attempt to fool ravens she has captured before. Photo by Jim Zelenak.

Some biologists hang from ropes to study birds. Many rise painfully early in the morning. Stacia Backensto disguised herself as a man.

At the time, Backensto worked in the oilfields on Alaska’s North Slope. Her study subject was ravens, and she took to wearing a moustache because they seemed to recognize her as she roamed the industrial landscape.

“All of the adults I’ve tagged remember me,” Backensto, now a biologist for the National Park Service, said at the time. “It makes them hard to trap or get close to.”

She tried to fool the birds by posing as an oilfield worker. To play the part, she tucked her black hair below a ballcap and wore Carhartts overalls. Thinking that was not enough, she stuck on a fake moustache.

Backensto, a former PhD student with UAF’s Regional Resilience and Adaptation Program, studied the raven's role in how oil and gas development affects migratory birds. During her fieldwork, she spent much of her summer at oilfield camps near the Arctic Ocean. Workers there starting noticing ravens as the only bird species during a Christmas Bird Count years ago, and now there can be more than 100 ravens in the dead of winter at Prudhoe Bay.

“I think there were likely ravens on the North Slope (before oil development), but they weren’t breeding with the density and distribution we’re seeing now,” she said.

Though the landfills on the North Slope are clean (workers burn food and cover trash when they truck it around), ravens and other animals -- glaucous gulls, grizzly bears, and arctic foxes -- are there in good numbers because we are there, Backensto said.

Ravens scrounge human food in winter but seek out natural sources when it gets warmer. In summer, they eat lemmings, shrews and the eggs of eiders, geese, and ducks.

“They make good use of the tundra,” Backensto said. “We’re trying to understand their impact on tundra-nesting birds in summer.”

About 20 or 25 pairs of ravens nest in the oilfields on drilling rigs, communications towers, and other structures, often using strands of wire and plastic tie straps to build their nests. Pairs have up to six chicks in what most birds would consider winter.

“We had chicks in nests (in the oilfields) at the end of April,” Backensto said. “We were still having 10-to-15-below days, and it’s at least a week until the chicks have any feather development.”

Because breeding territory is limited in the oilfields, young ravens often leave the North Slope at the end of summer. Prudhoe Bay ravens Backensto captured and fitted with vinyl wing tags have shown up in the village of Beaver on the Yukon River and in Fairbanks and Anchorage.

“I think the (Dalton Highway) is an important travel route,” she said. “There are potential scavenging options along the way.”

Backensto said oilfield workers she impersonated while stalking ravens helped her out.

“The people that work up here are a fantastic source of info,” she said. “A good portion of our study is rooted in talking to people up here, and they’ve really helped me try to trap ravens.”

Sometimes those workers walked right by Backensto when she wore her moustache, which she purchased at Party Palace in Fairbanks (she had to defend the expense to an accountant in the Institute of Arctic Biology business office). 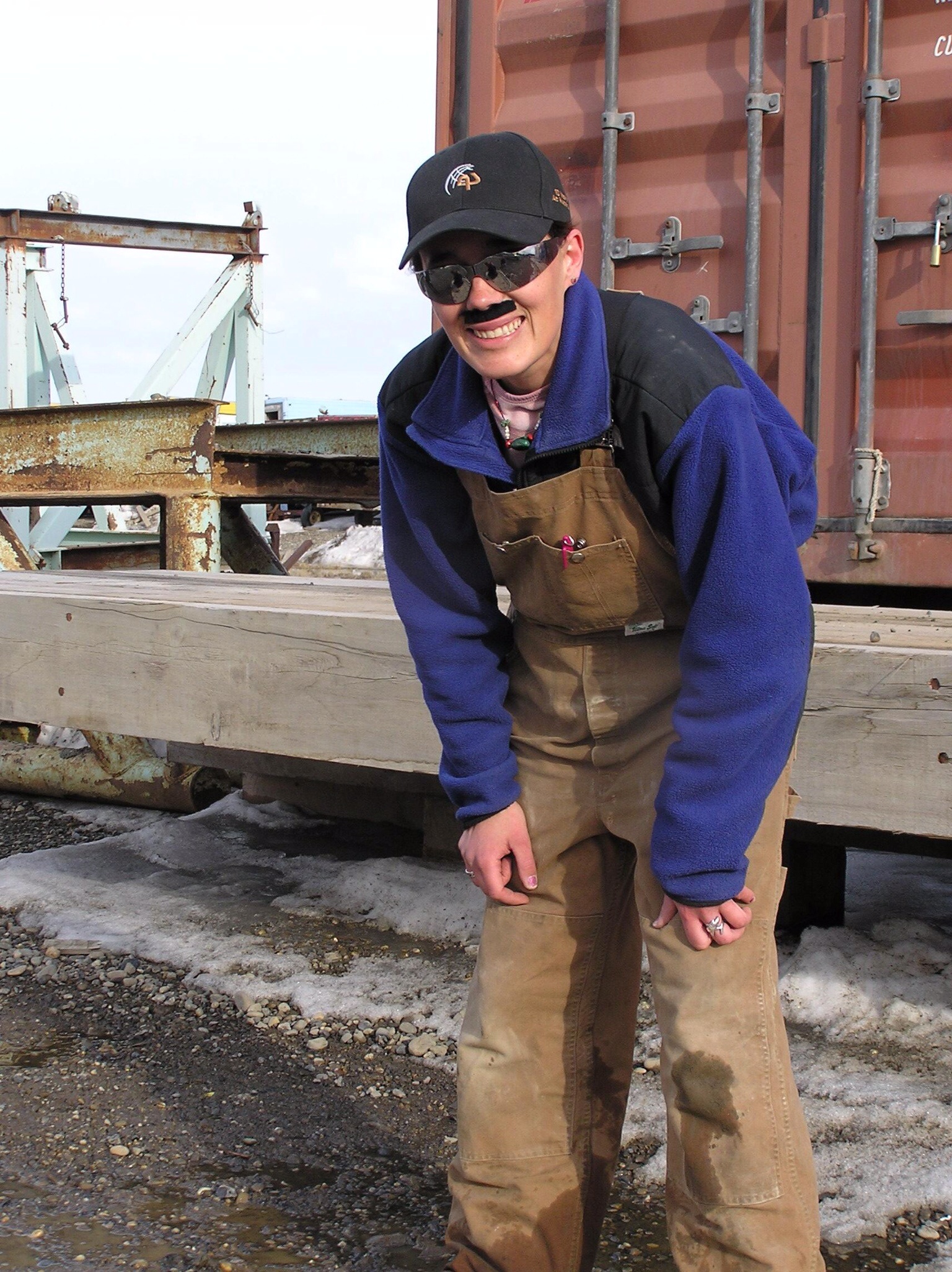 Raven researcher Stacia Backensto disguises herself as an oilfield worker in an attempt to fool ravens she has captured before. Photo by Jim Zelenak.