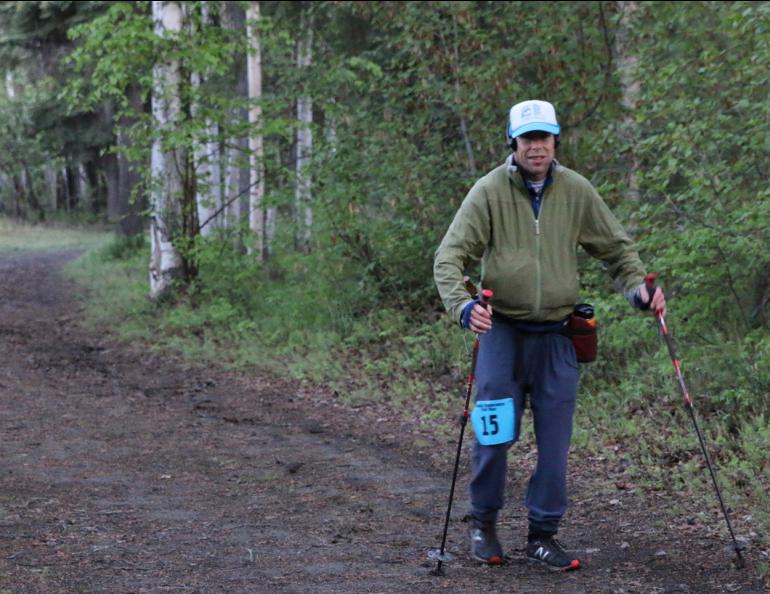 Running circles around the land of no night

All of a sudden, we are again the land of no night. Summer happens every year, but it is always a surprise. Maybe because winter is the normal state of middle Alaska, with a white ground surface possible from late September until late April.

Over the years, I have marked this frenetic, green time by slaving my body clock to the circling sun and trying to stay awake at least once for 24 hours. Races are a convenient way to do this. This year, there was one on the calendar I could not resist.

The Alaska Endurance Trail Run is a six-mile loop through my backyard, the North Campus of the University of Alaska Fairbanks. The North Campus is 1,100 acres of boreal forest, cleared fields and a few lakes owned by the university. It’s a rectangle of land with perfect ski trails in the winter and a few semi-dry running and walking loops in the summer.

Though we are still a few weeks from our deepest nod toward the sun (summer solstice will happen at 2:07 a.m. Alaska time on June 21), race organizer Don Kiely knew darkness would be a memory in Fairbanks on the race day, June 1.

“This is the land of the midnight sun, so leave your headlamps at home!” he wrote on the description for the race, which attracted 15 people for the 24-hour option. They would see how far they could go on foot from 8 p.m. Friday to 8 p.m. Saturday.

At the race’s darkest point — about 2 a.m. Saturday — I rammed a spruce root with my big toe and wondered if a headlamp would have been a good idea. The sun had set at midnight, dropping behind the green hills almost dead north of us. It would pop over the treetops again at 3:30 a.m., just 24 degrees to the east of pure north.

For that fleeting few hours, Fairbanks experienced civil twilight, when the sun bobbed less than 6 degrees below the northern horizon. Civil twilight provides enough lumens to read a book outside, pull weeds in your garden or anticipate bumps on a path of sodden wood chips. It does not allow you to see aurora or stars. They will be back soon enough.

I reached my jogger’s low point at the time I expected, during the dimmest part of the day/night. The body’s mysterious requirement for sleep (scientists still don’t know why we need eight hours) was most noticeable at that time. I fantasized about tucking into the little cabin on my property, 200 steps from the trail, and yanking a sleeping bag from its stuffsack.

But, as Don Kiely had reminded us at the start, we could sleep every other night. The point here was to endure, to push through those learned habits and see where it took us. We knew it would take us over the same earthy smelling 6-mile loop, for as many revolutions as we could complete in 24 hours.

That concept seemed dreadful at times — for me before the race and then on my second lap, when my legs reminded me I had not trained and, oh, there were 22 hours to go.

However, much like life outside the sporting realm, extra-long events are a roller-coaster of highs and lows. Some pains can be ignored or ibuprophened into numbness. A good moment is just around that tree, or maybe beyond that hill.

At 3:30 a.m., the sun rose, bathing the snowy peaks of the Alaska Range red. An hour later, splotches of sunlight penetrated the spruce, striking my shirt and warming my heart, resetting the circadian clock that tunes our bodies to a 24-hour day. I felt good: Hey, I’m supposed to be awake now!

It’s true that the scenery never changed in those 24 hours, but no six-mile lap was the same. The quality of light was always changing, from warm and bold at 8:30 p.m. to shadowy and so-chilly-your-hands-didn’t-work at 4 a.m.

In 70-degree heat of 2 p.m., winds combing the tall spruce pulled down curtains of pollen, tiny yellow orbs that hold the male genetic material of the tree. Though they dust car windshields with a mustard-colored film, those grains don’t bother allergy sufferers as much as birch pollen, composed of more irritating proteins.

Leaves of deciduous trees were fully unfolded, gorgeous neon green and not yet stenciled by insects. In the breeze, Populus tremuloides lived up to its name, shimmering with a sound like the sea. In a few weeks, the aspen leaf miners will turn many of those leaves into silver potato chips.

At a bend of the trail near the Potato Field, we entered a pool of air that smelled like honey. A flowering chokecherry tree blooms there, amid a half dozen boreal forest species. Like all the chokecherries in Alaska, this one has been imported to this spot. Its location in the forest suggests the tree’s seed might have been deposited by a bohemian waxwing that swallowed frozen berries on a dark December day and perched on a nearby branch.

Throughout the day, but especially late and early, the summer visitors to North Campus were making themselves heard. There was the Hammond’s flycatcher from Honduras, squeaking out its song in an aspen near the Bicycle Bumps. And the Townsend’s warbler from Costa Rica, so high in the tallest spruce it was pretty much invisible. And, the sound of summer, the fluty call of a male Swainson’s thrush, a recent arrival from Panama.

Then there were the locals, the family of ravens screaming from a white spruce not far from the race start. Baby ravens grow to adult size almost right away; you can tell newborns by their pinkish inner mouths, which are visible because the chicks shriek all the time.

The squishing of sneakers was a reminder that cold is the most common state of this country (Fairbanks’ year-round average temperature is a hair below freezing). Spongy wet trail betrayed the presence of icy ground underneath that acted like a sheet of plastic, not allowing winter’s snowmelt to drain away. That hidden permafrost is a legacy of a colder time, hundreds and thousands of years ago when frigid air penetrated deep. Permafrost is not present in southern Alaska, nor on the south-facing, higher elevation places on the UAF campus.

All too quickly and not soon enough, the clock at the start/finish near the ski hut read 20:00. It was 8 p.m. on the second night of moving, 24 hours into the race. We had all covered a lot of my backyard. Danny Powers, who grew up in Fairbanks but lives on a boat in Norway right now, ran 100 miles in that 24 hours to win. Teri Buck of Anchorage was a close second at 97.5. I managed 10 laps, for 60 miles.

At the end, as I sank into a folding chair for a delicious rest, I thought of the truism spoken by Norwegian explorer Fridtjof Nansen. On an unsuccessful quest for the North Pole during which he had fed most of his sled dogs to one another, Nansen found himself on a floating raft of sea ice, grinding up against other chunks, with no apparent way out.

He of course made it home, because he wrote this memorable quote in his book “Farthest North.” It seemed fitting for the tough moments of the Alaska Endurance Trail Run, and anything else that seems like it will go on forever.

“Everything comes to an end, and so did this.” 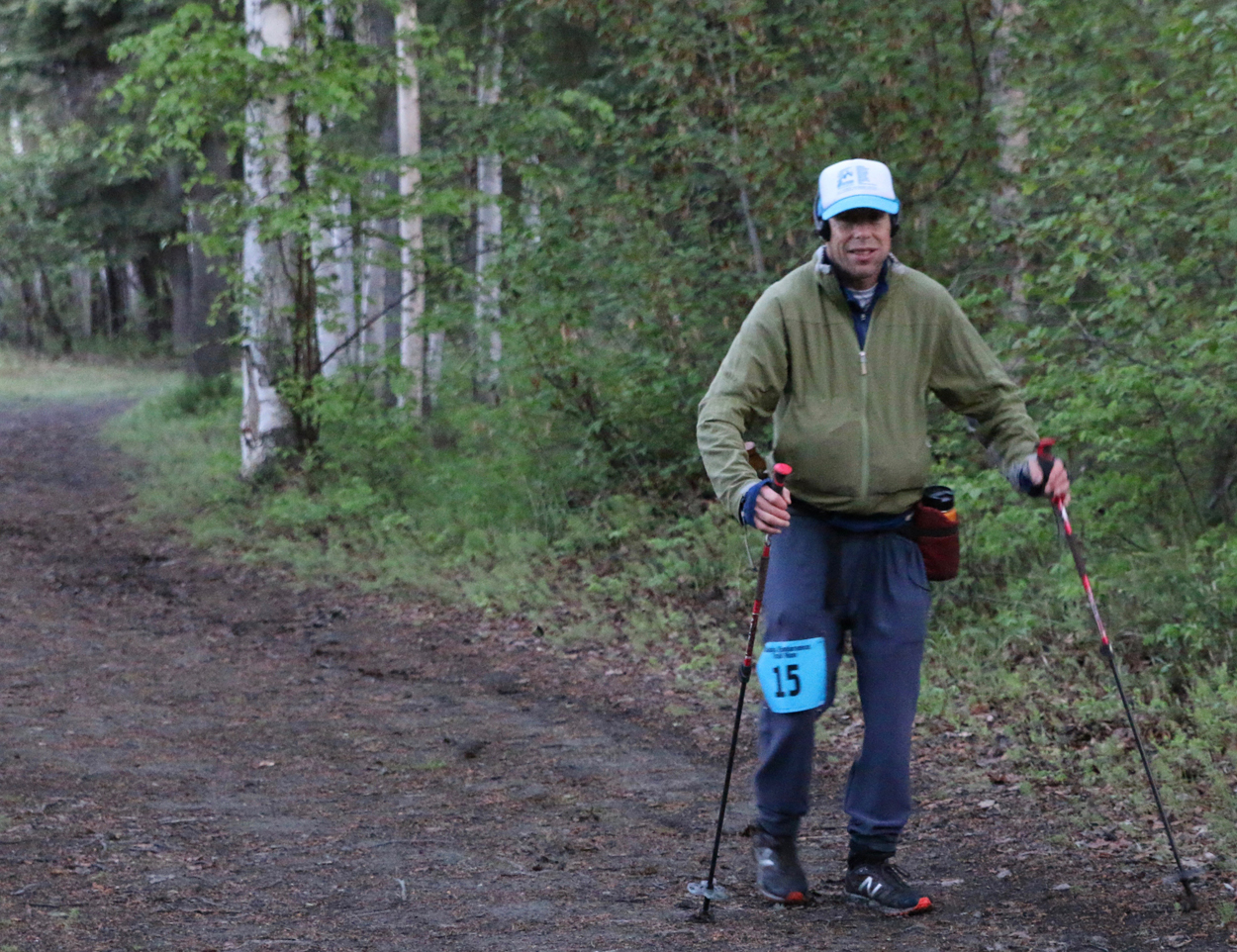