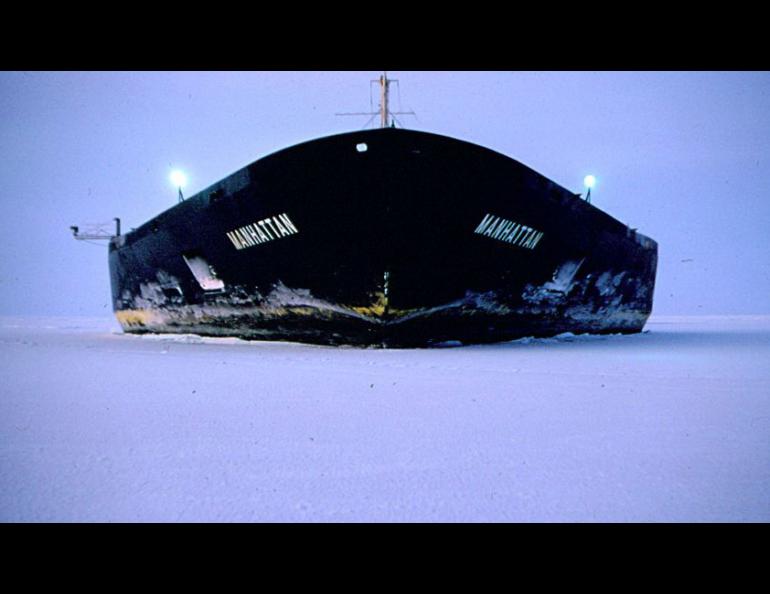 A supertanker voyage through the Northwest Passage

Forty-six years ago, a ship long as the Empire State Building sailed with intention toward obstacles that captains usually avoid. The icebreaking tanker SS Manhattan was an oil company’s attempt to see if it might be profitable to move new Alaska oil to the East Coast by plowing through the ice-clogged Northwest Passage.

Begging his way aboard was Merritt Helfferich, then 31 and a do-all guy at the Geophysical Institute of the University of Alaska Fairbanks. Helfferich heard of Humble Oil and Refining Company executives recruiting a team of Alaska engineers to ride the ship and measure the properties of sea ice it crushed along the way. When the ship’s launch was delayed and other professors needed to teach their fall classes, Helfferich was soon gasping in wonder at a dock in Halifax, Nova Scotia. There, he saw the giant ship he was to ride all the way north to Prudhoe Bay.

The largest ship ever to fly an American flag, the SS Manhattan busted its way north in search of heavy ice. If the Manhattan could prove its worth, Stan Haas and others with Humble Oil envisioned the recently discovered North Slope oil moving away from Prudhoe Bay in superships that would be even larger.

The late 1960s were the days before the oil pipeline across Alaska; executives wondered how the crude in the magnificent new Prudhoe Bay discovery might find a way to the masses. In 1968, a group of oil companies gambled that a trans-Alaska pipeline would prove more profitable than tankers. Before they got any permits, the consortium purchased 800 miles of fine-grain steel pipe from Japanese companies.

“Eight-hundred miles of one-eighth-inch pipe was not cheap,” Helfferich said as he recently shared his memories.

Helfferich remembered bunking on the ship in a section right over one of the nickel-iron propellers, so large the shaft that spun them was 18 inches in diameter.
“At a certain speed there was a maddening wah-wah-wah-wah,” he said. “We’d say, ‘Go faster or go slower.’”

When the sea ice bashed a Doppler speed-tracking system — one of the few setbacks for the ice-strengthened tanker — Helfferich and other scientists on board helped track the velocity of the Manhattan by throwing a block of wood to the ice and counting the seconds it took for the ship to pass the block. His main duties were to helicopter out to ice in the Manhattan’s path and test its thickness, saltiness and other features he vowed to keep secret from oil companies that had not pitched in for the Manhattan experiment.

After leaving Chester, Pa., on Aug. 24, 1969 and reaching Prudhoe Bay and then Barrow by September 14, the Manhattan returned through the Northwest Passage and returned to New York by Nov. 12. Helfferich, who was aboard for most of the trip before flying back from arctic Canada, remembers a smooth ride for the most part. The tanker-icebreaker handled most ice easily, though it sometimes needed to be nibbled out by icebreakers from Canada and the U.S. that accompanied it.

Despite a few problems, such as an iceberg puncturing part of the hull and being turned back by congested ice floes in McClure Strait (but still being able to reach Prudhoe Bay through Prince of Wales Strait), the Manhattan proved the possibility of moving oil year-round through the Northwest Passage. But Humble oil executives concluded the pipeline was a cheaper way to go.

Reflecting upon the journey now, Helfferich said that with recent sea ice melt, the passage would now “be a lot easier. The probability of encountering open water is very much higher now.”

But that doesn’t mean he is rooting for far-north tanker traffic. Ross Coen, author of “Breaking Ice for Arctic Oil,” included this except of a diary Helfferich kept while he was aboard the ship in 1969:

“I thought of the implication of this massive store of wealth (Prudhoe Bay), what it will do to Alaska and the world,” he wrote. “These non-inhabited islands hopefully ice-locked and thus protected from the encroachments of noisy, dirty people are perhaps soon to be removed from their protective layer and adorned with communities. The North Slope will be covered with people and in time there will be nowhere else.” 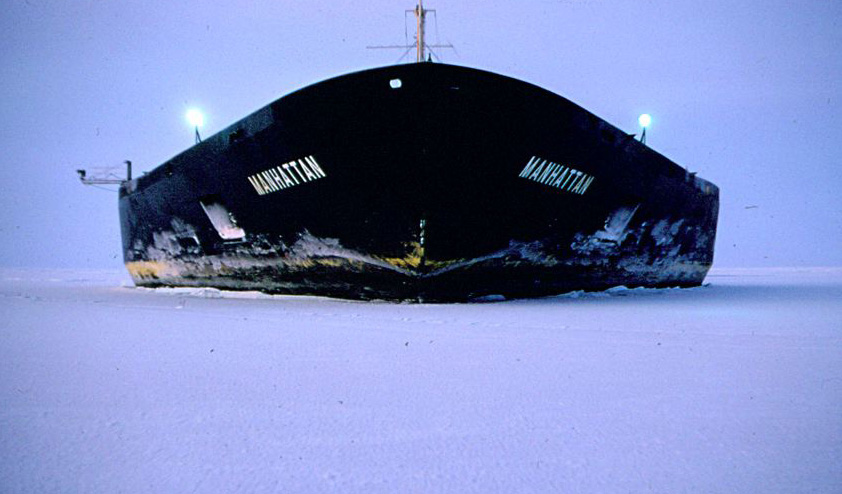