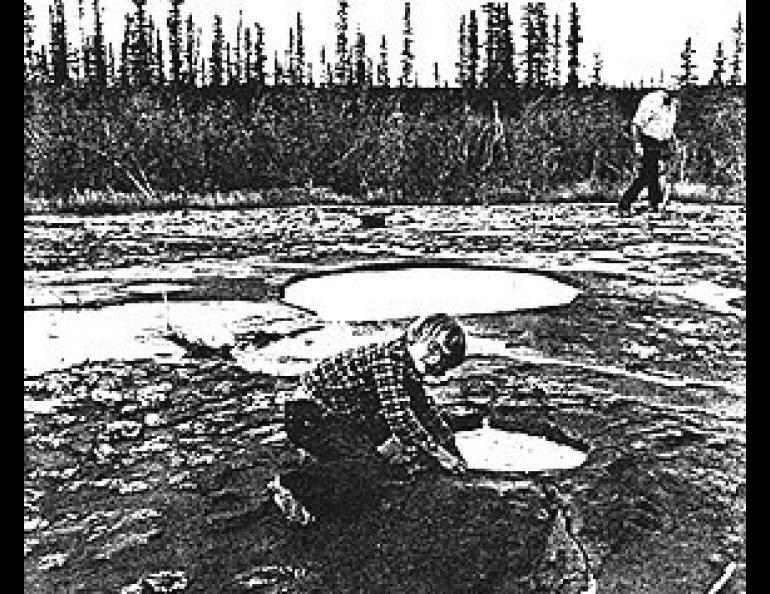 Budding scientist, Tommy Pollard, tests the water bubbling up through a vent atop Tolsona Mud Volcano Number One.

The Tolsona Number One mud volcano lies just a tenth of a mile north, and within easy walking distance, of Mile 173.2 of the Glenn Highway. This is roughly ten miles west of Glennallen, on top of the bluff just east of the Tolsona Creek crossing.

The mud volcano is about 8 meters high (25 feet), 180 meters wide and 270 meters long. Except for a bare region at the crest, the volcano is covered by brush and trees. At the crest, thirty to forty vents bubble out methane gas and water laced with sodium chloride and calcium chloride salts. The turbulent bubbling of the gas causes mud to be carried up with the water for deposition around the edges of each vent. An increase in the overall activity sometime in recent years has spilled a new layer of mud and salt down from the top of the volcano where it has killed brush and trees growing near the crest.

The seething cauldrons atop the Tolsona mud volcanoes (there are four of them in the area) hide a mystery, since no one really knows where the erupting methane gas comes from.

Methane is the simplest of the hydrocarbon compounds, being composed of one carbon atom and four atoms of hydrogen. It is colorless and odorless, but it burns right smartly. Mixed with air in proper proportions, it burns explosively. Consequently, it has caused many deaths among coal miners, who call the substance "marsh gas" or "fire damp."

One source of methane is decomposition of organic material under anaerobic (lacking in air) conditions. Thus it is possible that the methane bubbling up through the Tolsona mud volcanoes derives from coal beds or other hydrocarbon sources in the rocks not far below. Certainly methane is the chief constituent of natural gas; more than 80% of the gas that will be transported in the proposed gasline to be built in Alaska and Canada is methane.

Another possibility is that the methane bubbling up through the Tolsona mud volcanoes comes from deep within the earth where it was trapped or evolved during the formation of the solid earth itself. 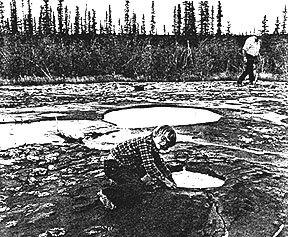 Budding scientist, Tommy Pollard, tests the water bubbling up through a vent atop Tolsona Mud Volcano Number One.