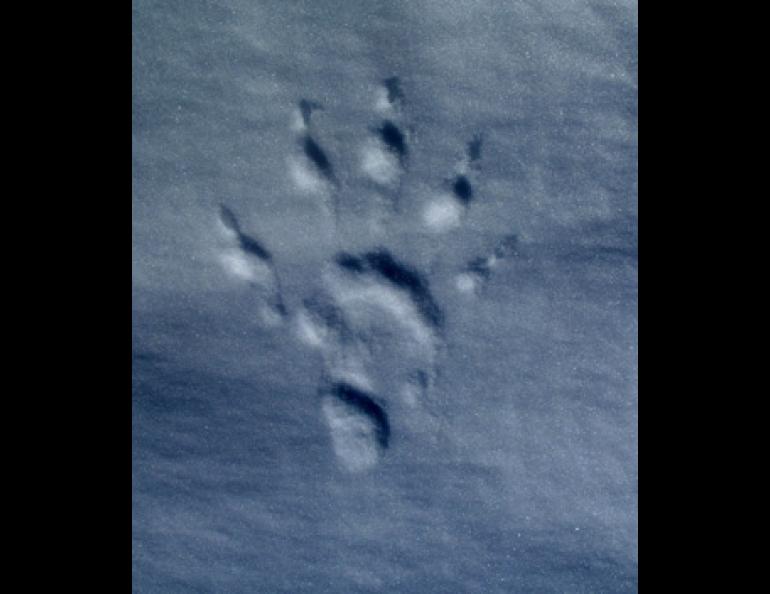 Wolverine footprint in the snow.

On the track of the wolverine

As I skied on a frozen river, a hairy creature trotted toward me. When the wolverine spotted me, it popped up in the air like an antelope, landed like a cat, and bounced away into the high country of the Wrangell Mountains.

Nicknamed the devil bear, woods devil or carcajou, the wolverine has a Latin name, Gulo gulo, that means “glutton.” The Koyukon Indians have a better name, “doyon,” from the Russian “toyon,” which means chief or great man. The few biologists who have studied wolverines in Alaska say they are exceptional creatures.

“They’re hard-pushing animals, with a lot of perseverance. They’re on the go all the time,” said biologist Audrey Magoun, who studied wolverines in the Brooks Range for her 1985 Ph.D. thesis at the University of Alaska. “Wolverines have a weasel personality, only they’re about 30 times bigger.”

Magoun said she loves to study wolverines because so little is known about them. Legends of wolverines wrecking traps and trashing cabins are common, she said, but the actual events are rare because wolverines numbers are low, and they avoid people.

Craig Gardner, an Alaska Department of Fish and Game biologist who did graduate research on wolverines, found that only about five wolverines roamed every thousand square kilometers in southcentral Alaska where he did his research.

“Take the wolf numbers in that area and divide by five, and you’ve got a pretty good estimate of the number of wolverines,” he said.

Though Gardner has long wandered over the mountainous country that wolverines prefer, he’s only seen four from the ground. Magoun said the animals are so secretive she has a hard time finding wolverines even when she’s close to radio-collared animals. She’s not surprised to talk to old-timers who tell her they’ve never even seen a wolverine.

Wolverines rarely hang out in the low country, Magoun said, which is why river travelers don’t often see them. The animals, particularly denning females, like to stay in mountainous terrain, where there’s a supply of longlasting snow for their dens. The high country also provides safety for newborn wolverines, and a good supply of food — ground squirrels and other small mammals.

Wolverines also take a few caribou calves each year, Gardner said. But with its powerful neck and jaws, a wolverine is built to be a scavenger.

“It’s not a great predator,” Gardner said. “It has to make a living other ways.”

Gardner once tracked a wolverine to a snowdrift where he saw the animal remove four feet of snow, then ten centimeters of soil, to retrieve a golden eagle carcass.

“He had to have put that eagle there in August or September, and he retrieved it in March,” he said.

Though they look bigger, male wolverines only get to be about 35 pounds. Females are even smaller, averaging about 20 pounds. In her study, Magoun found that females roamed about 100 square kilometers, while the males covered from about 300-to-800 square kilometers. While that seems expansive, Magoun thinks it’s not much ground to cover for an animal that in large part feeds on animals others have killed.

Myths of wolverine’s ferocity are based on fact, Magoun said. During her study in the Brooks Range, she caught wolverines in live traps that were made of steel and 11-gauge chain-link fence. The wolverines sometimes escaped the traps by chewing through the fencing.

Gardner spends much of his time with caribou and wolves these days, but he still holds a special reverence for the creature he calls “Gulo.”

“There’s not a more beautiful animal out there,” he said. “They’re my favorite beast in the world.” 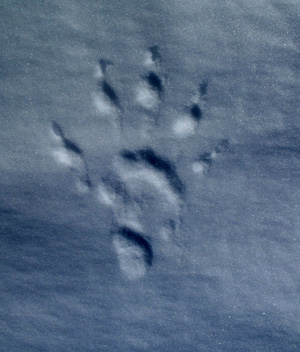 Wolverine footprint in the snow.