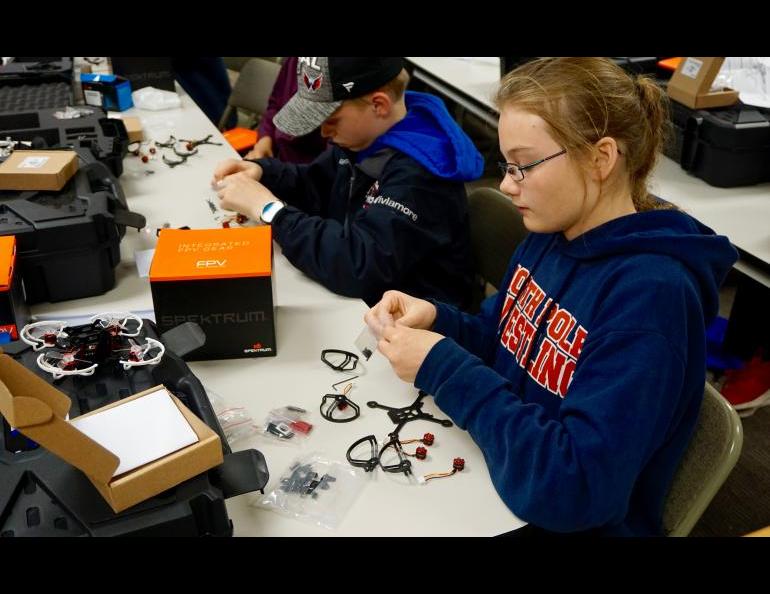 Students assemble unmanned aircraft at a camp offered by the University of Alaska Fairbanks and the Federal Aviation Administration in June. The students practiced flying the aircraft and, on the camp’s last day, took them home. Photo by Patty Eagan 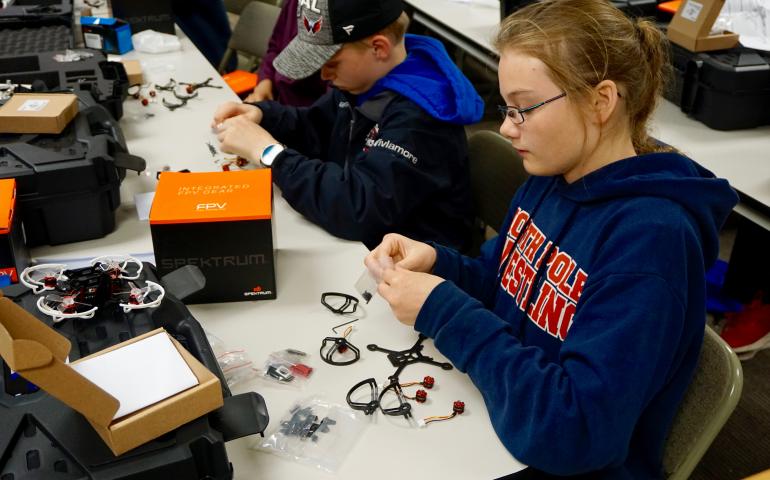 Students assemble unmanned aircraft at a camp offered by the University of Alaska Fairbanks and the Federal Aviation Administration in June. The students practiced flying the aircraft and, on the camp’s last day, took them home. Photo by Patty Eagan

FAA and UAF spark interest in drones at camp

Twenty-one middle school students built, learned how to operate and took home their own small unmanned aircraft at a camp taught by pilots and engineers from the University of Alaska Fairbanks Geophysical Institute the week of June 11-15.

Pilots and engineers from UAF’s Alaska Center for Unmanned Aircraft Systems Integration instructed the students through a combination of engineering, flying and interacting with simulators. The students spent the week building their own unmanned aircraft, piece by piece, and flying them. They listened to presentations from industry guest speakers and learned about topics like no-fly zones and the importance of registration.

The goal was for kids to leave with technical skills and a well-rounded knowledge of not only the UAS industry but also FAA safety rules and other requirements.

The FAA initiated these camps in 2016 through its UAS Center of Excellence. This year, it selected UAF as one of three universities in the nation for the STEM outreach program.

In this rapidly growing industry, unmanned aircraft can be used in a multitude of careers, such as engineering, science, government work and aviation. UAS technology is used in rescue efforts, cinema, the military, photography and hobbyist recreation, and has a potential future in package delivery and precision agriculture.

The camps taught the kids how to pursue STEM careers, including what education they’ll need and what characteristics a particular job might require of an individual. The FAA hopes taking home an aircraft will foster further learning in the kids and those they interact with. The agency wants to involve interested, educated kids from groups who are underrepresented in STEM fields.

“We’re looking to continue this type of education, especially to youth who might not otherwise have an opportunity to be exposed to drones and other STEM-type career opportunities,” said Diane Ford, the FAA’s STEM outreach program manager, who traveled from Washington, D.C., for the camp.

Future ACUASI camps depend on funding from the FAA.

“It’s kind of an investment in the future workforce,” Ford said. “If we can influence the kids and enable them to become interested in drones and these kinds of careers, that’s a plus for us and our future.”