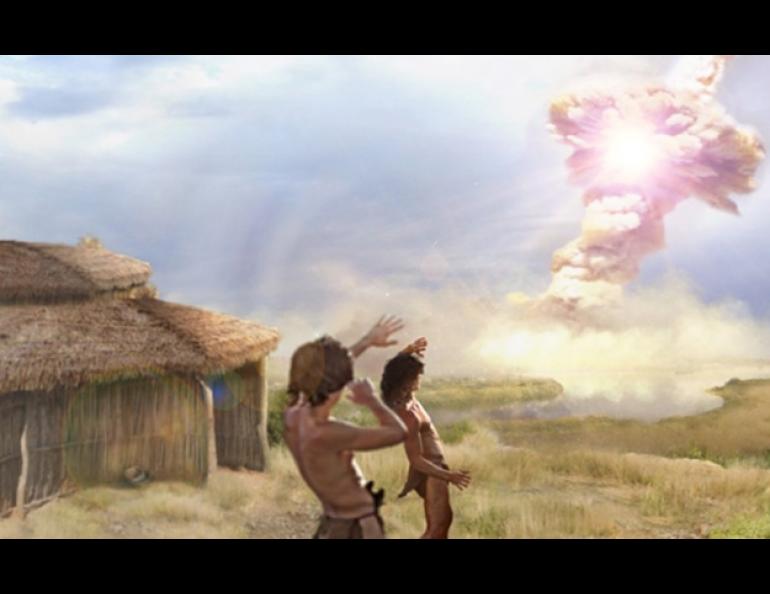 The settlement of Abu Hureyra, in Syria, may have been destroyed 12,800 years ago because of a comet. Image credit: Jennifer Rice, CometResearchGroup.org 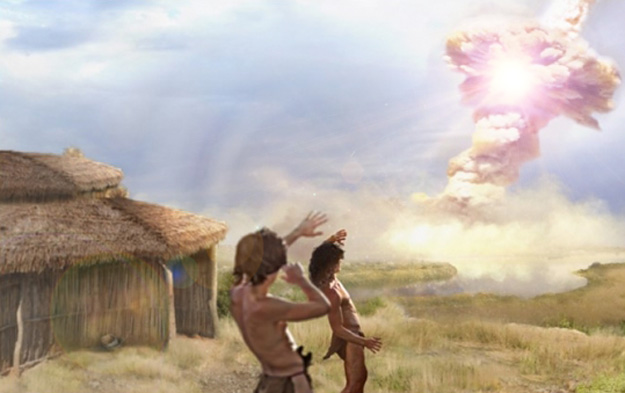 The settlement of Abu Hureyra, in Syria, may have been destroyed 12,800 years ago because of a comet. Image credit: Jennifer Rice, CometResearchGroup.org

Fire and ice: exploding comet may have destroyed paleolithic settlement

New analysis of materials from an archeological site in Syria suggests it may be the only human settlement we know about that was destroyed by pieces of an exploding comet.

Abu Hureyra, an ancient mound site, is covered by the waters of Lake Assad, created when the Tabqa Dam was completed in 1974. In 1972 and 1973, before the site was flooded, archaeologists quickly collected enough evidence of houses, food and tools to identify two sites – a paleolithic settlement and evidence for an early agricultural society.

Scientists also found fragments of meltglass scattered among the artifacts and soil samples from the site. Meltglass is created by extremely high temperatures. New research suggests this meltglass formed at temperatures far higher than humans could achieve at the time, or even temperatures that could be attributed to fire, lighting or volcanism.

Instead, evidence suggests the Paleolithic settlement at Abu Hureyra was indirectly struck and destroyed by fragments of a comet about 12,800 years ago.

“The samples that we collected from this location indicated that enormous pulses of heat energy were delivered to the village.” said UAF researcher Günther Kletetschka, co-author on a paper published in March in the Nature journal Scientific Reports.

James Kennett, a UC Santa Barbara emeritus professor of geology, was the lead for the study. Such intensity, Kennett said, could only have resulted from an extremely violent, high-energy, high-velocity phenomenon — something on the order of a cosmic impact.

An impact or an airburst must have occurred close enough to drive massive heat and molten glass over the entire early village at Abu Hureyra, likely resulting in its total destruction.

This could have happened if material with very low porosity arrived at Earth at high speed, Kletetschka said. As a comet goes past the Sun, the steam around it turns to fluffy ice in the cold of space. When this material collides with Earth, it will come to an abrupt stop in the atmosphere due to its extremely low density.

“Because comets fly with speeds of 50 kilometers (31 miles) per second, several tons of porous ice may generate a fireball approaching megaton energy, comparable to the detonation of a nuclear bomb,” Kletetschka said. “Such an enormous explosion probably happened over the Syrian village.”

Researchers analyzed meltglass pieces found at the site for a range of geochemical and physical properties. Results showed samples include melted grains of quartz, and other minerals such as chromferide and magnetite — materials which formed in temperatures ranging from approximately 3100 - 4000 degrees Fahrenheit.

These materials are extremely rare under normal temperatures but are commonly found during events such as meteorite impacts, according to Kennett.

Kletetschka’s work helped rule out lightning, a more common origin, as what made the materials. He did this using magnetic analysis. Meltglass produced by lightning is highly magnetized. However, the Syrian melt samples showed a magnetization level of only two percent, making lightning an unlikely source.

The study concludes the meltglass was formed from nearly instantaneous melting and vaporization of biomass, soils and floodplain deposits, followed by instantaneous cooling.

However, effects of the event were likely not isolated to Abu Hureyra. The materials are consistent with other sites across the world; it’s likely that they resulted from a fragmented comet, as opposed to impacts caused by individual comets or asteroids.

This site may also be linked to a larger, global event: The Younger Dryas.

The Younger Dryas Boundary impact hypothesis posits that a comet impact 12,800 years ago drove the world into a period of glaciation. Researchers propose the comet and its impact contributed to the extinction of most large animals, including mammoths, horses and camels in the Americas, and the disappearance of the North American Clovis culture, which happened around that time. The comet impact also may be linked to the abrupt onset of the Younger Dryas cooling episode, when Earth’s climate cooled significantly for a 1,200-year period.

Abu Hureyra lies at the easternmost sector of what is known as the Younger Dryas Boundary strewnfield, an area which encompasses about 30 other sites in the Americas, Europe and parts of the Middle East. These sites hold evidence of massive burning, including a widespread carbon-rich “black mat” layer that contains millions of nanodiamonds — high concentrations of platinum and tiny metallic spherules formed at very high temperatures.

“A single major asteroid impact would not have caused such widely scattered materials like those discovered at Abu Hureyra,” Kennett said.

He added that  a large comet entering the atmosphere could potentially cause thousands of airbursts within a span of minutes, enough to cross an entire hemisphere of Earth. The Younger Dryas Boundary hypothesis proposed this mechanism to account for the widely dispersed materials across the Northern and Southern Hemispheres.