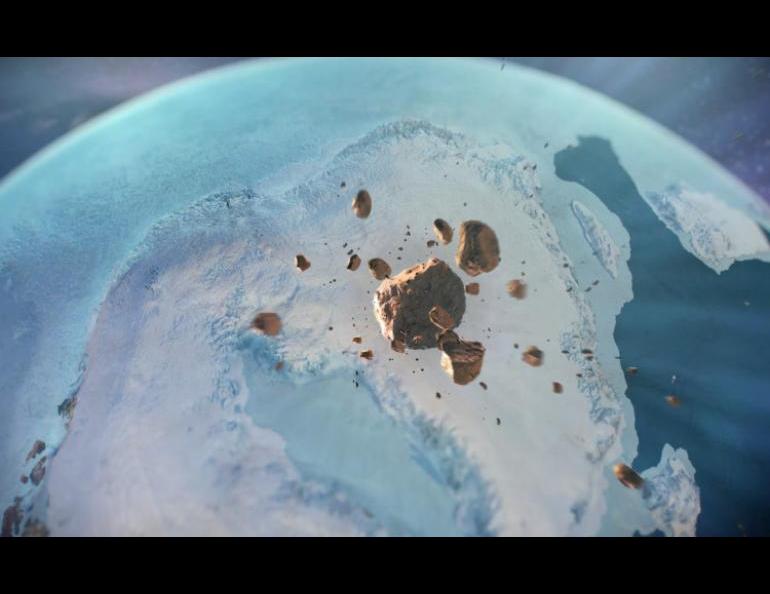 This artist’s rendition illustrates what the meteorite might have looked like as it approached Earth. Illustration by Brian Monroe/NASA 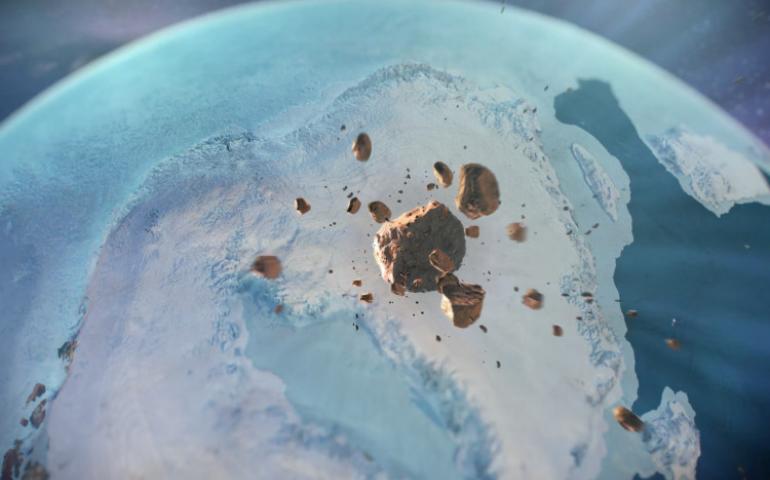 This artist’s rendition illustrates what the meteorite might have looked like as it approached Earth. Illustration by Brian Monroe/NASA

An international team including a researcher from the University of Alaska Fairbanks Geophysical Institute has discovered a 31-kilometer-wide meteorite impact crater buried beneath northern Greenland’s ice sheet.

This is the first time that a crater of any size has been found under one of Earth’s continental ice sheets. The impact crater is among the 25 largest yet found on Earth.

Mark Fahnestock, a UAF research professor, worked with colleagues at NASA and the Natural History Museum of Denmark to verify the discovery, initially made in 2015. The research is described in a new study published in the internationally recognized journal Science Advances.

Fahnestock has studied radar maps of the ground under the Greenland Ice Sheet for the past 20 years. He was visiting with colleagues in Denmark when they showed him a depression they had noticed underneath the Hiawatha Glacier, at the very edge of the ice sheet in northern Greenland. Fahnestock and Joseph MacGregor, a glaciologist at NASA, organized flights with a powerful new radar on a research plane belonging to the Alfred Wegener Institute to get a more detailed map of the area.

MacGregor said the radar imaged the depression in stunning detail. “A distinctly circular rim, central uplift, disturbed and undisturbed ice layering, and basal debris. It’s all there,” he said.

“The crater is exceptionally well-preserved, and that is surprising, because glacier ice is an incredibly efficient erosive agent that would have quickly removed traces of the impact. But that means the crater must be rather young from a geological perspective,” said professor Kurt H. Kjær from the Natural History Museum of Denmark.

The crater formed when a kilometer-wide iron meteorite smashed into northern Greenland. The crater has since been hidden under nearly a kilometer of ice.

“The biggest collection of iron meteorites ever found is in this area of Greenland,” Fahnestock said. “There’s this really interesting history. Greenlanders have put iron edges on spears and tools for hundreds of years using chunks of meteorite.”

Earlier studies have shown that large impacts can profoundly affect the climate, with major consequences for life on Earth.

“The next step in the investigation will be to confidently date the impact,” Kjær said. “This will be a challenge, because it will probably require recovering material that melted during the impact from the bottom of the structure. So far, it has not been possible to date the crater directly, but its condition strongly suggests that it formed after ice began to cover Greenland, so younger than 3 million years old and possibly as recently as 12,000 years ago — toward the end of the last ice age.”

If the crater does turn out to be only 12,000 years old, it would mean that humans were around when the meteorite hit and might have suffered the consequences.

ON THE WEB: A NASA animation of the crater is at https://www.youtube.com/watch?v=vTr3VdGlFr8.

Fahnestock and other authors of the paper will be on Facebook live Science Advances on Thursday, Nov. 15, at 10 a.m. Alaska time. They will talk about how they found the crater, how they tried to date it and how it might shed light on theories surrounding our planet’s history. Please post questions in the comments, and the scientists will try to answer as many as they can. Go online to https://www.facebook.com/ScienceAdvances/videos/496153514127298/.

You can read the study in Science Advances at http://advances.sciencemag.org/content/4/11/eaar8173.