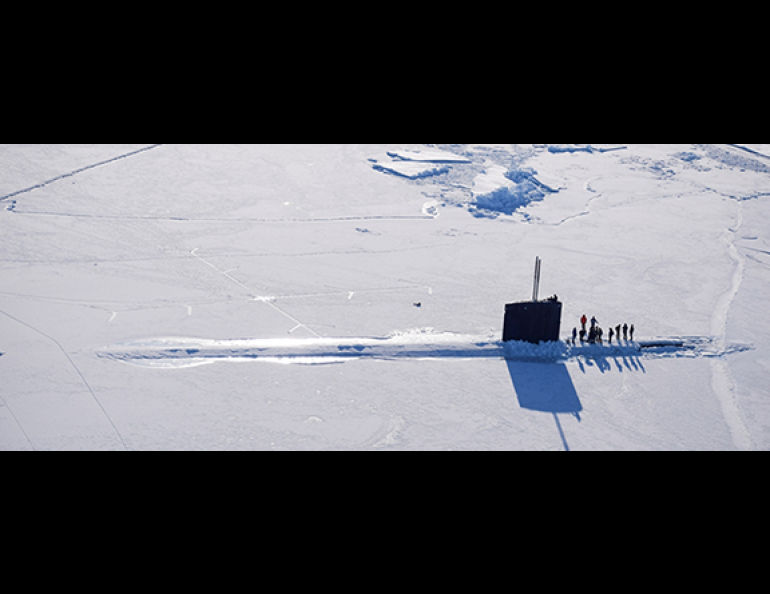 University of Alaska Fairbanks scientists are providing strategic ice and weather expertise to the U.S. Navy during its Ice Exercise 2020 in the Arctic Ocean this spring. The work helps ensure a safe and successful exercise for participants — both on and under the ice.

The Navy commenced ICEX 2020 with the construction of a temporary ice camp and the arrival of two fast-attack submarines on March 4. The three-week biennial exercise lets the Navy assess its operational readiness in the Arctic.

Ice Camp Seadragon is a temporary camp established on an ice sheet, or floe, in the Arctic Ocean. Seadragon, with more than 45 personnel, serves as command center for submarine operations and under-ice navigation exercises.

UAF’s sea ice team, led by Andy Mahoney from the Geophysical Institute, has been on site since late February. They’ve been monitoring ice and weather conditions, evaluating hazards and seeking an ideal ice floe for the camp.

“The key information that we are trying to provide to the Arctic Submarine Lab is the information that will go into picking the floe where we will set up the camp,” Mahoney explained before leaving for the exercises. “That’s a combination of looking at the satellite data to see what looks like a suitable floe … and flying out from Deadhorse and landing on the ice floes, measuring ice thickness, snow depth, characterizing the ice.”

International Arctic Research Center Director Hajo Eicken participated in the survey flights to pick this year’s ice floe. Arctic warming means thinner, weaker sea ice— a trend that Eicken said made this one of the most challenging years to find a suitable floe. Fortunately, despite thin ice, this winter was less windy, and the ice formed fewer cracks than is typical.

“The floe that was ultimately selected has a nice stretch of thick multiyear ice to set up the camp in a reasonably safe spot, with level first-year ice in the neighborhood that a runway can be set up on,” said Eicken.

Mahoney’s team will remain until the end of March to provide on-the-ice observations for the Navy’s exercises. Back at UAF, a second team will monitor atmospheric and ice conditions using state-of-the-art remote sensing, radar and satellite technology. They’ll provide localized forecasts and outlooks for the season ahead.

One unique product developed at UAF allows Navy personnel to draw from past experiences. IARC’s Brian Brettschneider analyzes conditions that led to hazards during previous ICEXs, such as a crack that damaged the ICEX runway during 2018. He searches for developing conditions that are similar; alerting Navy personnel with this information can mean faster, safer decision-making.

“The Navy wants to know if anything in the next seven to 10 days is a match for the days in prior years where they had a set of conditions that damaged their floe,” said Brettschneider. Based on feedback during ICEX 2018, this product was one of the Navy’s go-to resources.

For more than 70 years, U.S. submarines have conducted under-ice operations in the Arctic region. UAF scientists have supported the exercises since 2018. In a rapidly changing Arctic, the success and safety of this work relies on effective and timely collaboration between UAF scientists, the Navy and the Ukpeagvik Inupiat Corp.

Other UAF scientists involved in the project include Josh Jones, Uma Bhatt and Lewis Shapiro from the Geophysical Institute; John Walsh and Tom Ballinger from IARC; and Jackie Richter-Menge from the Institute of Northern Engineering.

ON THE WEB: Follow #UAFonICEX for future updates. For more information about UAF’s contribution to ICEX, visit https://sites.google.com/alaska.edu/icex2020; to learn about the U.S. Navy ICEX 2020, visit www.dvidshub.net/feature/ICEX2020.