A robin captured by mist net in Slave Lake, Alberta, and fitted with a backpack GPS transmitter. Photo by Brian Weeks.

A robin chick in a nest near the middle fork of the Chandalar River. Photo by Ned Rozell.

American robins not heading north quite yet

While walking the streets of Washington, D.C., last month, a pleasant sound stopped me. A male robin was singing, high in a sidewalk sycamore.

It was December, months away from when that bird would use the same voice to declare his breeding territory. I wondered why he practiced now, as I stood amid the urban noise and listened to a melody that transported me back to April in Alaska.

Later that day, at the fall meeting of the American Geophysical Union, I sat in on a talk by Ruth Oliver, a graduate student at Columbia University who has studied the most common songbird on the continent as it makes its way to Alaska.

Oliver traveled to Lesser Slave Lake, a three-hour drive north of Edmonton in Alberta, during the last three springs to learn more about the American robin. Lesser Slave Lake is a popular stopping place for robins that migrate north during springtime.

Some of the 320 million robins on the continent spend their summers in the same areas they overwinter, but many head north to make more robins, perhaps for the ample insects and other foods available here in the warm season.

Oliver and her co-workers fitted a few migrating robins with GPS backpacks the size of a dime. With those, she could tell where the birds went, as the transmitters sent a blip to satellites every two days from April to June. Many of the 55 birds went to Alaska for the summer, scattering from north of the Brooks Range to the Kenai Peninsula.

Oliver’s research is part of a NASA project headed by Columbia professor and Toolik Field Station regular Natalie Boelman. Researchers are trying to learn how a warmer world affects bears, caribou, wolves, songbirds, and other animals. One of Oliver’s major questions is how robins are adjusting to earlier springs.

Researchers with the Lesser Slave Lake Bird Observatory in Alberta have been keeping tabs on robins and other birds for a long time. Since 1994, robins have been showing up there about five days earlier every decade. But the earlier arrival at the lake has not been steady; during years with late-spring snows, robins arrive later to Lesser Slave Lake.

During those big snow years, robins also hang around at Lesser Slave Lake longer, delaying their arrival in Alaska. But when they finally leave the plains and hurdle the Rocky Mountains on their way to Alaska and the Yukon, they “put the pedal to the metal,” Oliver said.

Maybe the bird I heard singing in Washington will be twitching to head north sometime soon. In a few months, that bird may touch down near Lesser Slave Lake. After a bit of rest, it might then jump into the sky and fly the approximate path of the Alaska Highway into the state, with its millions of acres of intact songbird habitat. Maybe, on some April evening, I’ll hear a robin sing his perfect song from a spruce branch in my backyard, and wonder if we’ve met before. 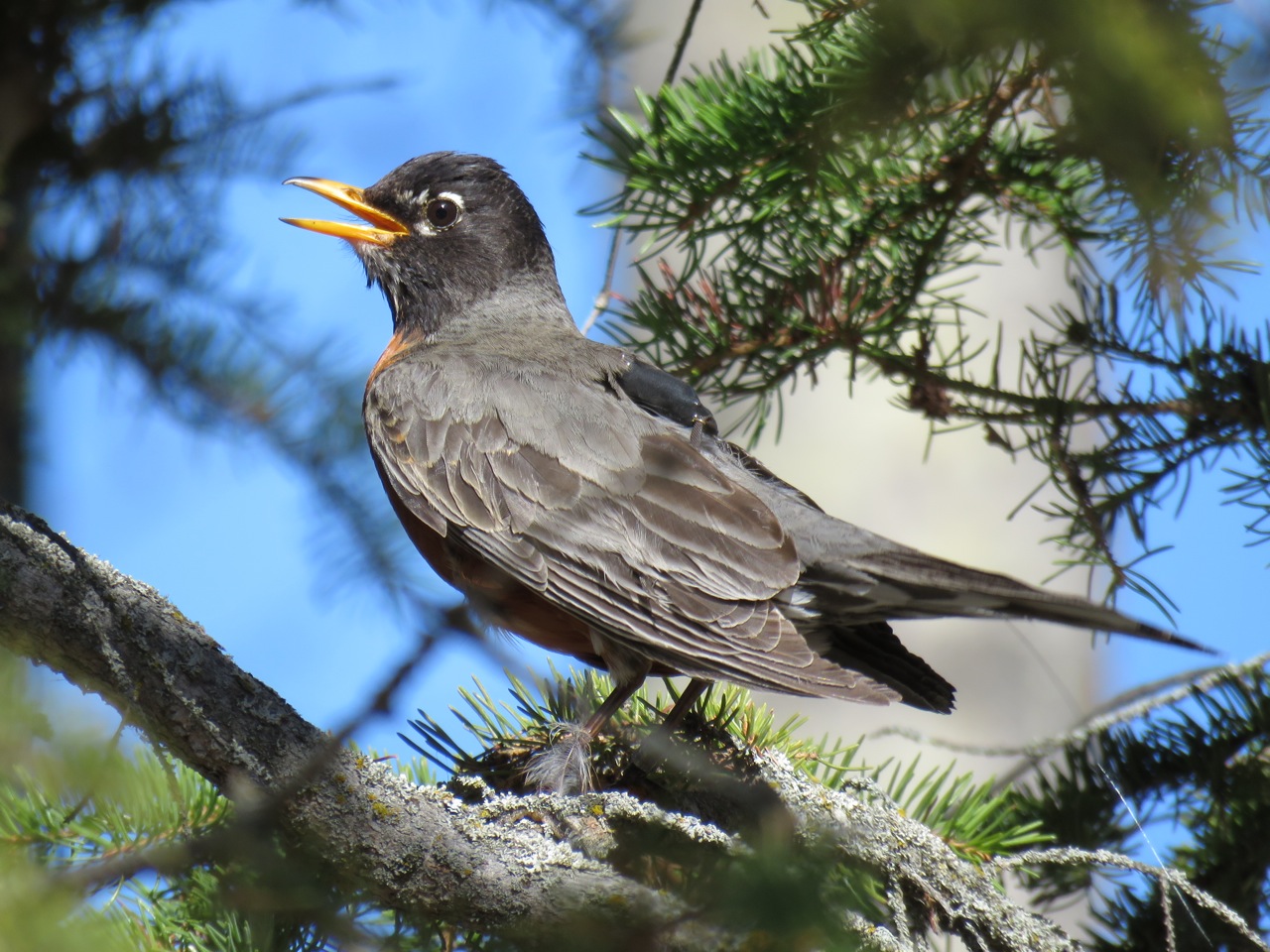 A robin captured by mist net in Slave Lake, Alberta, and fitted with a backpack GPS transmitter. Photo by Brian Weeks. 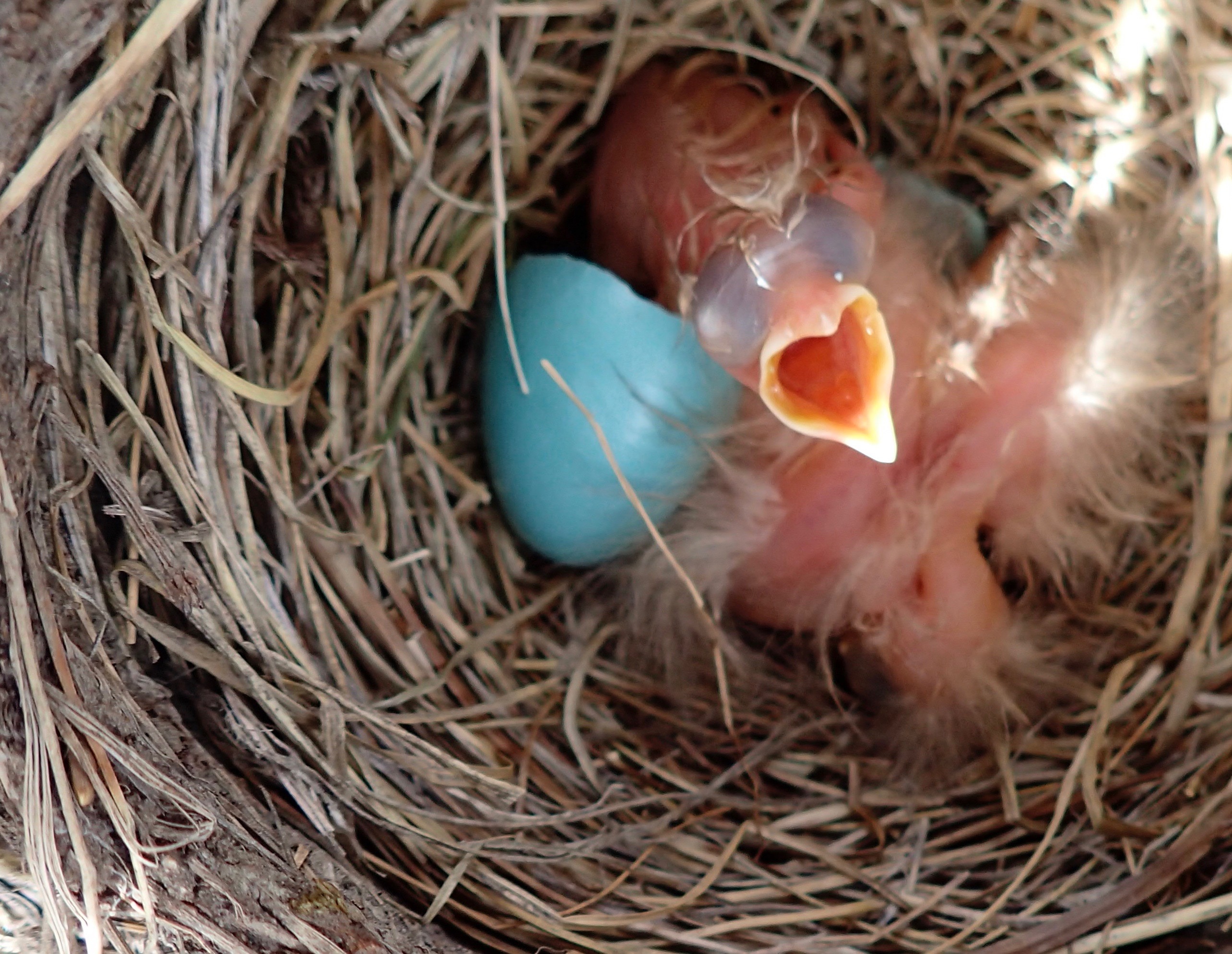 A robin chick in a nest near the middle fork of the Chandalar River. Photo by Ned Rozell.