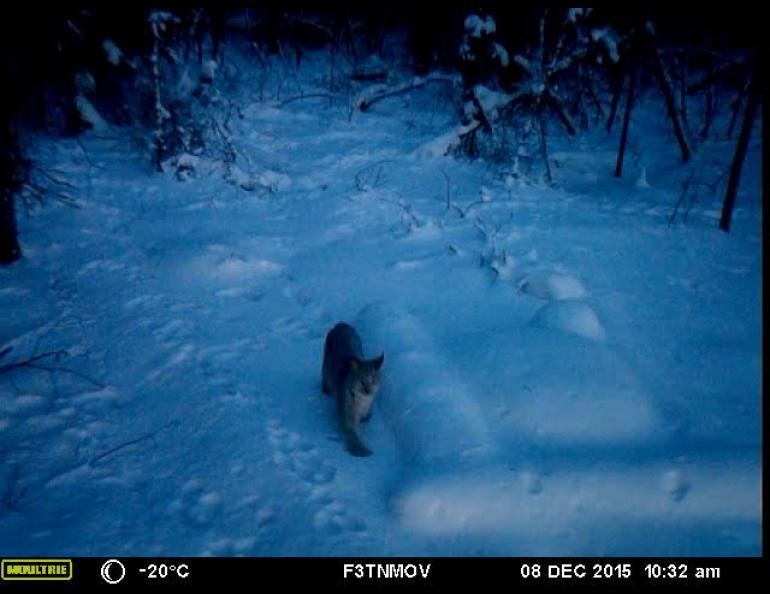 A lynx walks near a buried seismometer in a frame from a game-camera video. Seismologist Carl Tape installed the camera to confirm that bears were digging up his equipment. Courtesy of Carl Tape.

But a recent video posted by a seismologist makes the Tanana River flats look like the Serengeti. A motion-triggered game camera installed above buried instruments shows visits from coyotes, snowshoe hares, lynx, moose and black bears during the past winter.

Carl Tape of the Geophysical Institute installed the camera near a seismometer he and his colleagues buried between Nenana and Manley Hot Springs. The shake detector is part of a network the team spread over Minto Flats to learn more about earthquakes there.

Cameras are not standard equipment at earthquake-monitoring stations. Tape installed this one because something had twice dug up buried plastic boxes and an aluminum conduit line running to an antenna mounted on a spruce tree. On one occasion, a box with 240 pounds of batteries was yanked to a different spot.

After the game camera was in place, the animals came. Ghostly snowshoe hares and lynx padding through at night. Moose nosing their way around in daylight. Coyotes at all hours, cautious and alert. And, when spring arrived, bears, the only creatures that seemed interested in the equipment.

The camera caught a trio of black bears pawing at the tarp-covered buried equipment. Two small bears played tug of war with the tarp on a warm day in May.

Though this station kept operating and is still working, bears damage many scientific stations in the wilderness. On a similar project involving seismometers installed in southcentral Alaska, bears messed with six out of 10 stations not reachable by road.

"The wire probably makes good dental floss," joked biologist Mark Bertram of Yukon Flats National Wildlife Refuge. The man who has crawled into bear dens for research purposes has spent many hours observing black bears. He has noticed their interest in manmade items.

"Bears are extremely attracted to things made out of petroleum, like plastic fuel jugs, snowgo seats and sheathing on wires," Bertram said. "I would attribute it to their advanced sense of smell."

"Bears are a generalist omnivore," said Tom Seaton of the Alaska Department of Fish and Game. "To be successful, it pays to investigate every possible curiosity that could be or contain a food source."

"Could be just curiosity, might be the cover is plastic that smells good to them or even the color is attractive because it stands out," said biologist Dick Shideler of the Alaska Department of Fish and Game, who has observed all three species of Alaska bears for many years.

"Grizzly and polar bears have been known to walk down runways in villages and knock down all the runway lights, which make a slight humming sound." 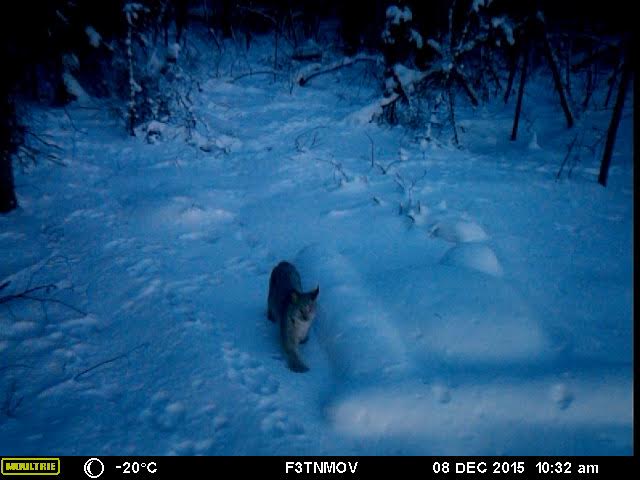 A lynx walks near a buried seismometer in a frame from a game-camera video. Seismologist Carl Tape installed the camera to confirm that bears were digging up his equipment. Courtesy of Carl Tape.