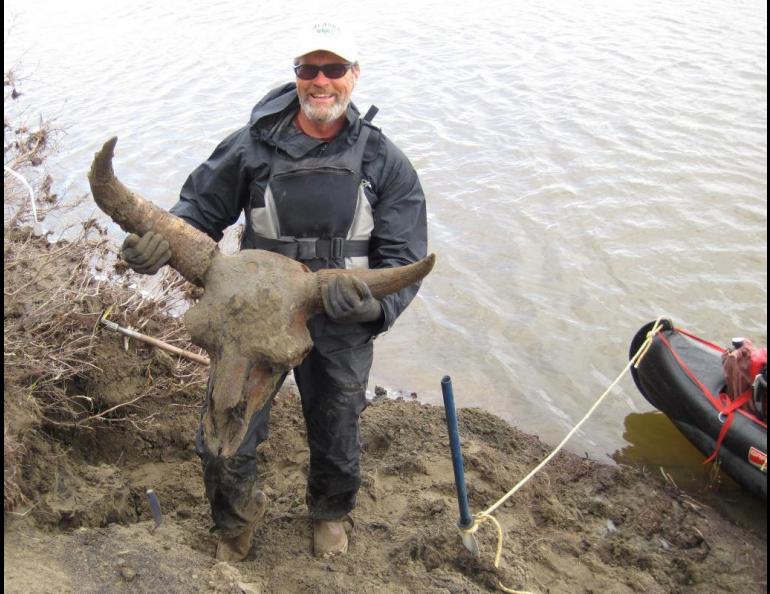 Bison Bob a big discovery on the North Slope

As she scraped cold dirt from the remains of an extinct bison, Pam Groves wrinkled her nose at a rotten-egg smell wafting from gristle that still clung to the animal’s bones. She lifted her head to scan the horizon, wary of bears that might be attracted to the flesh of a creature that gasped its last breath 40,000 years ago.

In the type of discovery they have dreamed about for years, Groves and Dan Mann, both researchers at the University of Alaska Fairbanks, in summer 2012 found in the thawing bank of a northern river almost the entire skeleton of a steppe bison that died during the last ice age.

In adventurous work sponsored by the Bureau of Land Management, Mann and Groves have been boating down lonely northern rivers for 15 years looking for scattered bones of ice age mammals, always hoping to find a complete skeleton or mummy of a mammoth, horse, or American lion. In mid-June, on a familiar stretch of river that flows northward on Alaska’s North Slope, they rounded a river bend and saw the skull of a large bison trapped against a willow shrub.

Groves described the scene: “We were paddling downriver, battling through a nasty squall of hail and wind, thinking about our camping spot about a mile downriver,” she said. “When the hail was just breaking up, we saw the upside-down skull with the lower jaw still attached. The teeth were really white. They stood out.”

The pair landed their inflatable canoe at the base of the 60-foot bluff. Even before they stepped out in their rubber boots, Groves spotted other bones that told her this wasn’t an ordinary site. Though this ever-changing wall had yielded many bones over the years, those were scattered remains of ice-age creatures separated by meandering river action and the crumbling and re-forming of permafrost-cemented bluffs. Mann said their typical discoveries resemble “Pleistocene in a blender.”

“It’s really unusual to find bones that are still articulated (together),” he said. “We’ve never found anything this intact before. I think it’s really exciting when we find single lion bones.”

Groves and Mann spent the next four hours carefully removing soil from the skull. When Mann lifted it out, the spread of the steppe bison’s horns was 43 inches. The record Boone and Crockett modern bison has a horn tip spread of 27 inches. Fairbanks expert on Pleistocene animals Dale Guthrie estimated this bison, which Mann and Groves have nicknamed “Bison Bob,” was a 12-year-old male that weighed around 1,200 pounds.

After stowing the skull safely in the front of their canoe, Groves and Mann camped for the night. When they returned to the site, they saw more bones sticking out of frozen bluff sediments. Bones of each leg were still connected by ligaments. Reddish-brown hair clung to some bones.

“When I saw the fur, that’s when I really got excited,” Mann said.

The pair worked the bluff for the next three days, pulling up buckets of river water to thaw the pieces of their rare find. They ended up finding every piece of the animal’s skeleton except for a left shoulder blade.

With a few hundred bison parts attracting blowflies in their camp, Mann and Groves awaited a helicopter they had called to transport the bison to somewhere safer.

Shortly after their find, on a satellite phone they tried to contact archaeologist Mike Kunz, their longtime collaborator at the Bureau of Land Management. Kunz is interested in the ancient Paleoindians that once lived on Alaska’s North Slope and what might have caused both them and bison to disappear about 10,000 years ago. Bad weather kept Kunz pinned down at the archaeological site he was digging several hundred miles away, but a helicopter arrived near Mann and Groves and transported Bison Bob to a North Slope BLM camp. There, someone put the bones in a predator-proof case.

Bison Bob was soon on a flight to Fairbanks, where he now resides in a freezer at a temperature similar to the bluff in which he was entombed. Bison Bob was so well preserved, Groves and Mann think, because the bison probably got caught in quicksand 40,000 years ago. The river buried Bison Bob, and there he remained, his body becoming permafrost. Groves and Mann happened to float by just as Bison Bob was coming out of the crumbling bluff for the first time.

“It was a total fluke,” Mann said. “If we came by two days later, a landslide would have buried him.”

Familiar in cave drawings in Spain and France, the steppe bison lived during the ice age in Alaska on a grassy landscape with mammoth, musk oxen, horse, caribou, lions, wolves and two species of bears. Bison Bob was a Bison priscus, which evolved into the buffalo we know today, though Bison Bob and his kind were more than one foot taller at the shoulder and 25 percent bigger.

Though researchers and miners have found other steppe bison in Alaska — most notably Blue Babe, displayed at the UA Museum of the North — Bison Bob stands apart for the completeness of the skeleton (a lion had killed Blue Babe, and other animals scavenged the carcass, which was missing its pelvis and parts of its legs).

“This is the kind of thing we’ve always dreamed about finding,” Groves said. “There’s a lot of information you can get from an entire skeleton: Because he had hair on you can tell what colors he was; with teeth and horn sheaths and hooves you can do isotope analysis to tell what he was eating and how his diet may have changed over the course of a year. You even might be able to tell if he went south into the Brooks Range during the winter.”

The fleshy parts of Bison Bob will be useful to learn more detailed information about Bison Bob, Mann said.

“It’s got exquisite DNA in it,” Mann said.

When the researchers have finished with much of their analysis of Bison Bob, Groves said she would like to make casts of his bones and reassemble them for a display at the UA Museum of the North.

“Then people can see what a big bison looked like,” she said. 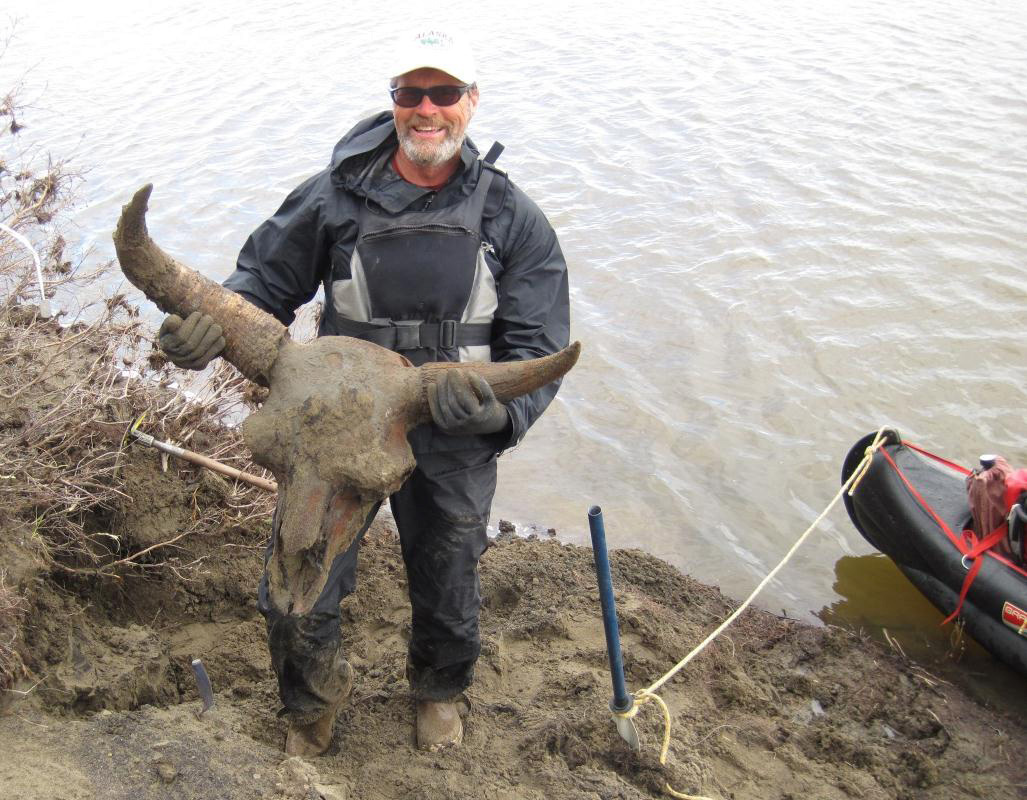