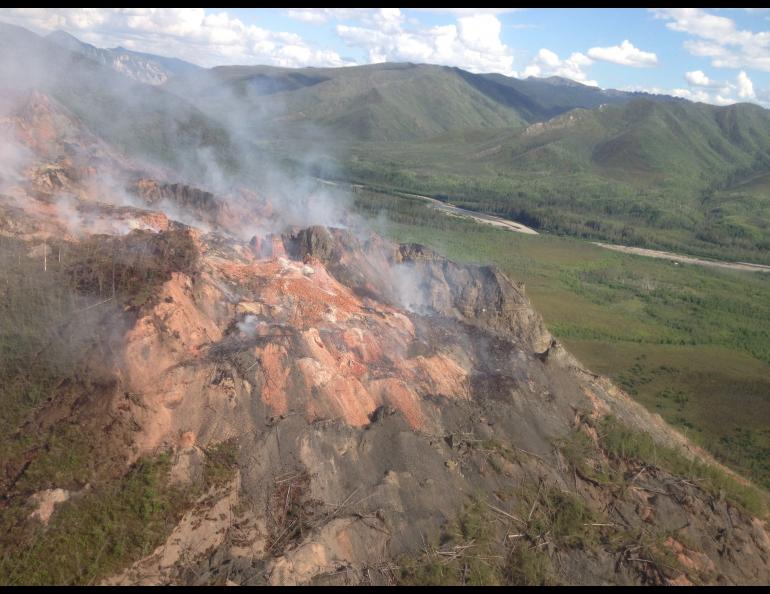 An aerial view of the Windfall Mountain Fire with the Tatonduk River in the background. National Park Service photo by Linda Stromquist.

Fire on the mountain near the Yukon River

A smoking mountain near the Yukon River not far from Eagle is, after further study, still a puzzle.

People first noticed acrid smoke in September 2012. The mountain has been steaming ever since, even through the coldest days of winter. Scientists thought a likely cause for the smoldering mountaintop was an oily rock deposit that somehow caught fire.

Linda Stromquist, a geologist for the National Park Service, has been trying to untangle the mystery of the Windfall Mountain Fire that burns above the Tatonduk River. She is one of few people to set foot on the warm flank of the mountain.

Stromquist and other professionals looked at geologic maps of the area and guessed the mountain might have a base of flammable oil shale that would explain the smoking. She grabbed a few samples of rock during a two-hour trip to the mountain in a helicopter.

"The pilot was worried about clouds of sulfur dioxide, and so was I," Stromquist said. "It was hot and steamy and smelly, kind of volcano-like."

Carl Stapler, a ranger at nearby Yukon-Charley Rivers National Preserve, called Windfall Mountain "the Yukon-Charley volcano." Though he was joking, the steaming hill could pass for a summit surrounding the Valley of 10,000 Smokes.

The samples Stromquist plucked during her visit to the mountain haven't helped explain the fire.

"Why is it continuing to burn when our samples show not-remarkable levels of organic carbon [like coal and peat]?" Stromquist said. "And there's no obvious combustion mechanism, either."

Pat Sanders, a ranger at Yukon-Charley based in Eagle, said she heard a distant explosion in late September 2012, right before people smelled bitter smoke. Stromquist checked for a record of lightning strikes at that time and found none.

Anupma Prakash is an expert on coal fires who has studied them around the world, including Healy. Interested in the Windfall Mountain Fire, the professor at UAF’s Geophysical Institute encouraged graduate student Christine Waigl and undergraduate intern Kristen Stilson to review satellite images of Windfall Mountain. They found that during the five years before the fire, the mountain had higher temperatures than the surrounding hills and boreal forest.

"The area has had elevated temperatures for a while, which makes it easier for a fire to start," Prakash said.

Stromquist has shared information on the mountain with a half dozen geologists, including two men who wrote their Ph.D. theses on rocks of the area. The meeting of minds might solve the mystery of Windfall Mountain. Or it might not, she said.

"Science is like that — you can't tie it up with a bow most of the time." 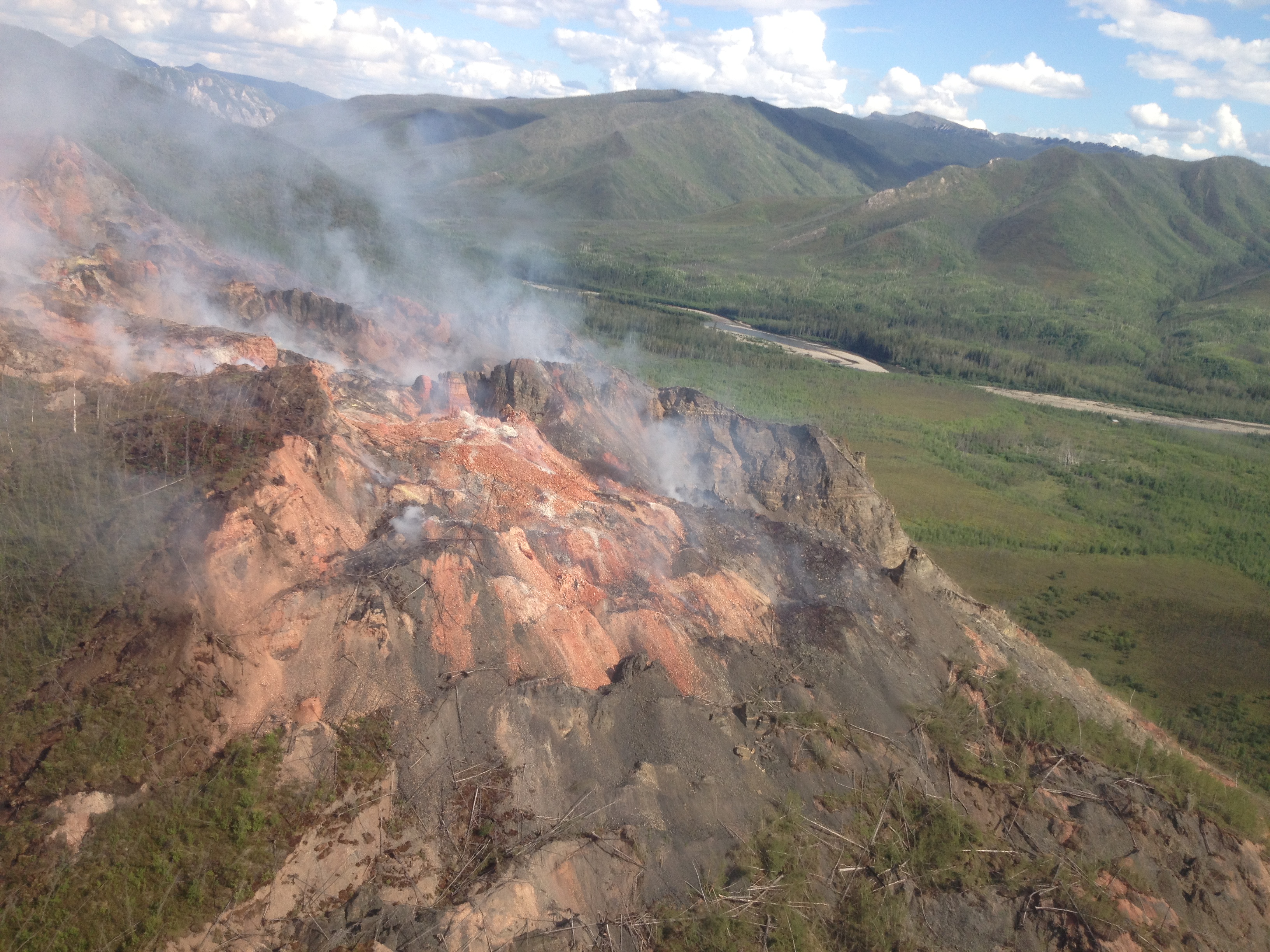 An aerial view of the Windfall Mountain Fire with the Tatonduk River in the background. National Park Service photo by Linda Stromquist.