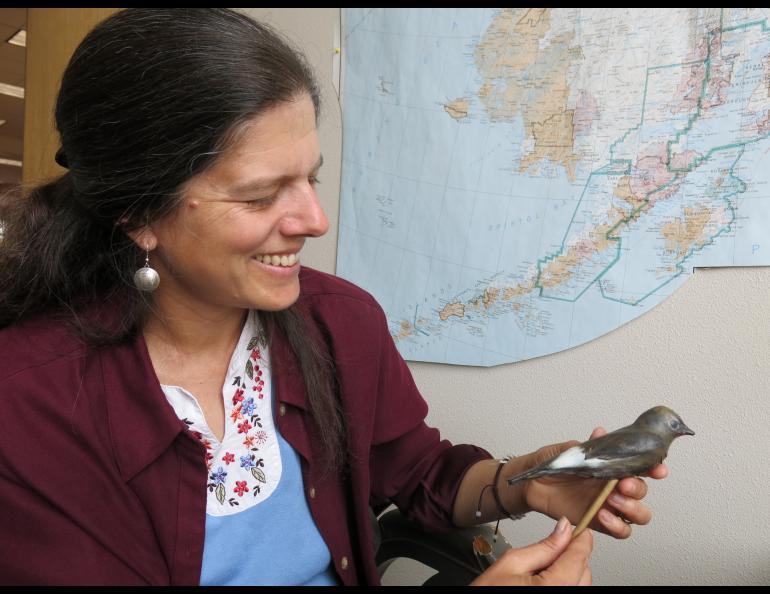 Biologist Julie Hagelin with a decoy olive-sided flycatcher made with a 3-D printer.

Julie Hagelin needed a fake bird. She found one in an unexpected place.

The biologist for the Alaska Department of Fish and Game is studying the mysterious olive-sided flycatcher, known for its piercing “quick, three beers!” heard above black spruce bogs throughout Alaska. The bird, which weighs as much as a dozen pennies and migrates as far as Bolivia, is declining throughout most of its range in North America. No one knows exactly where the birds go after they breed in the far north.

A major part of Hagelin’s project is attaching sunlight-cued trackers to the birds with a tiny harness. These feather-light “geolocators” require Hagelin and her helpers to capture the birds again the following year. When the birds return in spring, the biologists recover the tiny devices. They then extrapolate where the birds have been from daylight the geolocators record while exposed to sunlight.

That’s why Hagelin needed a faux flycatcher. She knows the most effective way of capturing a singing male is to challenge its machismo with the presence of a rival, and then to catch it with a net when it swoops to protect its territory. A bird decoy is more effective at pulling a bird from its perch than a song recording alone.

“Half the battle is getting the bird out of the treetop and into your net,” Hagelin said.

As she chatted about her challenge, a coworker asked Hagelin if she had considered creating her own flycatcher using a 3-D printer. Intrigued, she contacted Greg Shipman.

Shipman is the supervisor of the machine shop in the basement of the Geophysical Institute at the University of Alaska Fairbanks. Shipman and his inventive colleagues make everything scientists ask them for, from rocket parts to devices that pinch bones and pull them from salmon filets.

This is where the process resembles artwork. Hagelin found her first artist in David Lukaszek, a graduate student in anthropology at UAF. Lukaszek uses a 3-D laser scanner for his dissertation, in which he’s looking at details of primate vertebrae. A 3-D scanner is mounted on a moving stand that rotates around an object while shooting seven lasers onto its surface. All those points create a virtual 3-D image.

Hagelin handed Lukaszek a taxidermy mount of an olive-sided flycatcher. When he scanned it, the lasers went through some feather layers, making for an uneven scan. The plastic version was more blob than bird. But the team did not quit.

Hagelin then found a carved wooden olive-sided flycatcher on the Internet. She ordered it and was relieved it looked like a real bird. Lukaszek tried again; the wooden bird’s rigid features made for a clean scan.

Shipman fed the 3-D printer the new information. Soon, he had in hand two white plastic halves of an olive-sided flycatcher.

Hagelin almost had her bird, but she needed it to resemble a breathing olive-sided flycatcher, right down to the white patch near its tail exposed as a warning flag to rivals. She thought about painting it, but she wanted consistency. The whole point was to get a lifelike model she could reproduce and share with other biologist collaborators in Fairbanks and Anchorage during the short period when male birds are singing and establishing breeding territories.

“At 4 a.m. in bug-infested black spruce, (a great decoy) can mean the difference between catching a bird after five minutes of effort versus hours of frustration,” she said.

Andy Cummins, a digital designer at the Geophysical Institute who helped with an early canvas version of the bird, had an idea. He once installed giant decals on semi trucks and buses. Maybe he could order a flycatcher image printed on a sticker from a local car-design company.

Hagelin agreed. A Fairbanks company made the bird sticker from a photo series of her stuffed bird. Cummins helped her install the decal on the flycatcher decoy. It then looked like a real bird. One that could be left out in the rain without dissolving.

With great anticipation, Hagelin and her Fish and Game technicians strung up mist nets in a spruce bog. She tied the decoy to an upright sapling. She touched a button that played the song of a male olive-sided flycatcher.

From 100 yards away, a flycatcher heard and spotted an intruder on its breeding grounds. It leapt in the air and dove for the head of the dummy and ended up in the net just to the far side of it. Hagelin gently removed the bird from the net, attached the geolocator and released the bird. After tagging just eight birds in spring 2013, this year she and her team caught 27 birds.

Hagelin has ordered several more from Shipman for use next spring. With more decoys, she hopes to capture more birds, and then recapture them to download the geolocator information.

She is also collecting feather samples to determine how much mercury they are being exposed to on their wintering grounds and she’s setting up insect traps to see what they eat. Biologists want to know if their decline might be due to a food supply issue, problems along their migration route or something else. 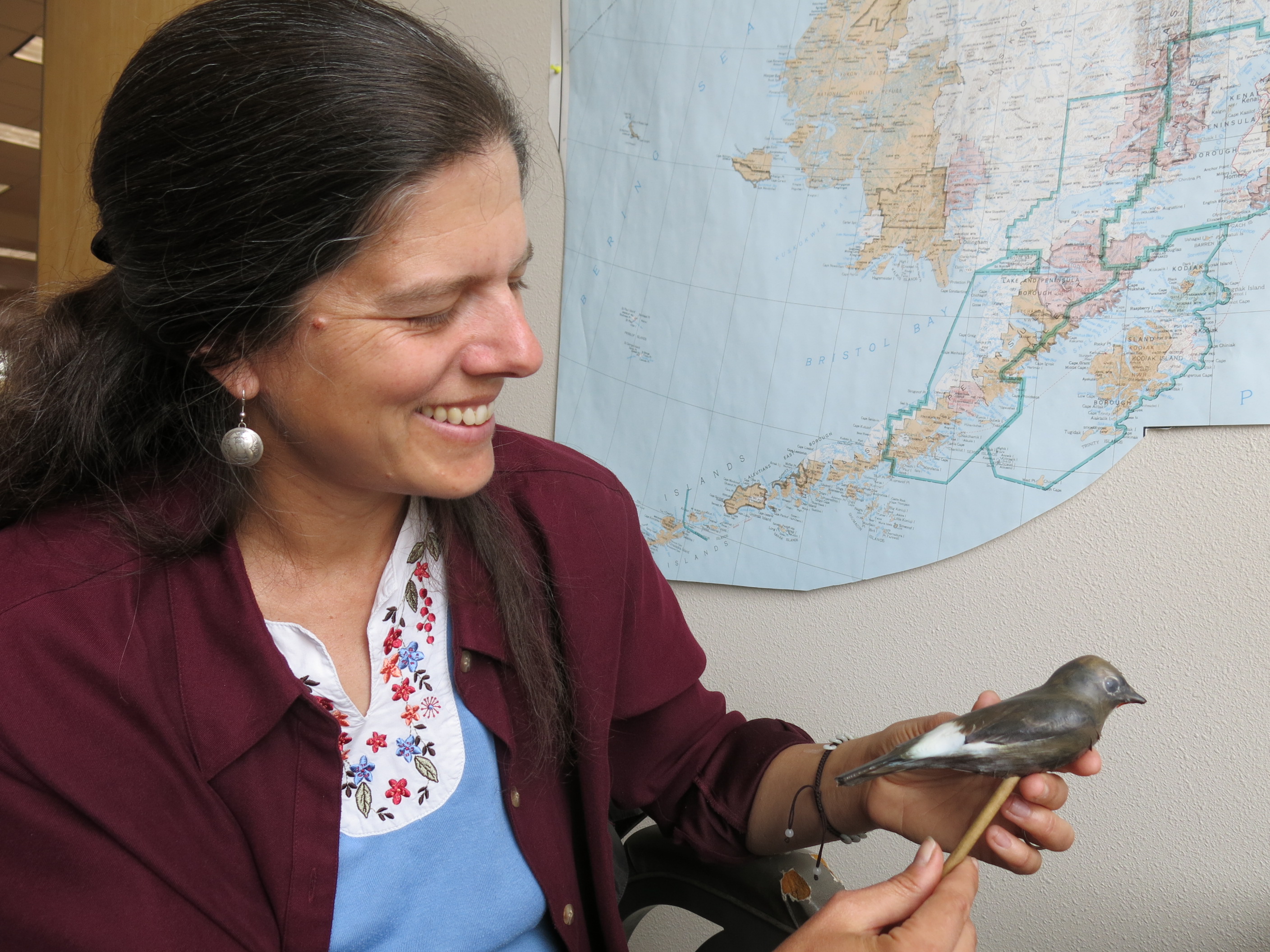 Biologist Julie Hagelin with a decoy olive-sided flycatcher made with a 3-D printer.