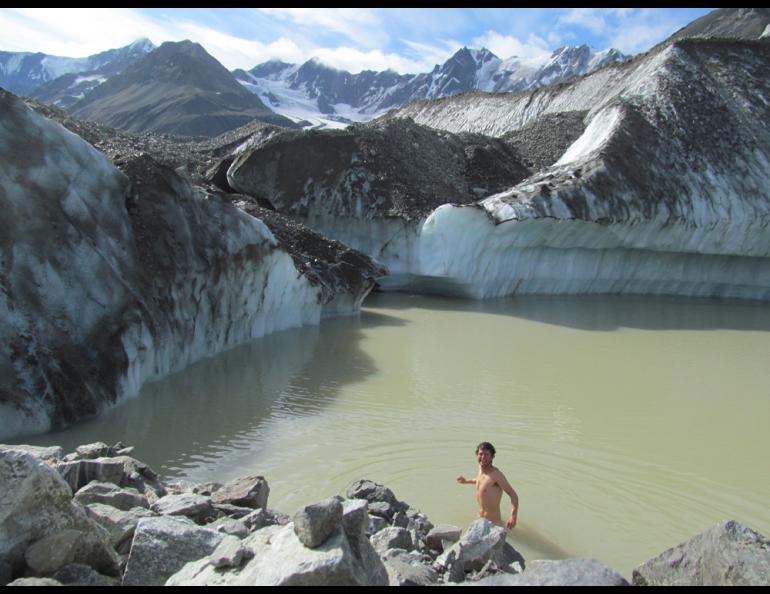 Glacier researcher Sam Herreid baths in a lake on Canwell Glacier in the eastern Alaska Range. Photo by Sam Herreid.

Living on a glacier, thinking about rocks

CANWELL GLACIER — This summer, Sam Herreid has slept for 12 nights on these rocks that ride slowly downhill on a mass of ice. For a few days at a time during the last six summers, the 28-year-old has lived on this ephemeral landscape in the eastern Alaska Range. From his regal perch, he is learning how rock cover affects glacier melt.

Sometimes, the Ph.D graduate student at Northumbria University in England pauses to look around. He sees white ice streams infused with bands of rocks. From above, the rocks look like chocolate swirls in vanilla ice cream. He thinks about how perfect this glacier is for someone studying how rocks either insulate like a blanket or transfer heat like black plastic.

Within this ice-filled trench created by the ratcheting of the Denali Fault are differing thicknesses of rock spilled on the glacier recently and long ago.

Carpets of rock two feet thick above glacier ice hug Institute Peak and other mountains to the south, resembling glaciers in the Himalaya. A few hundred feet away, rock piles such as one beneath his tent are one foot thick. From there, in five minutes he can walk to bare white glacial ice exposed to summer air and sunshine.

In addition to its variety of rock coverings, Herreid likes Canwell Glacier for its easy access from the Richardson Highway via an old mining road. This allows an enterprising, athletic researcher to stretch a budget of just a few thousand dollars into a summer of fieldwork.

The Fairbanks kid who started this project at UAF before heading to England keeps expenses low by ferrying equipment in and out with his mountain bike. For most of his meals he does not fire his JetBoil stove. A typical dinner is a few slices of bread, a chunk broken from a block of cheese and a dessert of Digestive biscuits he carried from England. His water source is a stream in exposed glacier ice that slows to a trickle every night.

Today, at the conclusion of his 2016 field season, Herreid will jog a few miles upglacier to pick up rock samples from nearby mountains to match with rocks downglacier. He will also break down his small camp and the weather station tripod a few steps away. He will pull all his dataloggers and poles he has installed to monitor the summer's ice melt. When he is done, he will stuff everything in a backpack, hike out to his bicycle and ride the gear out to a car parked near the highway.

"I treat fieldwork like an ultra(marathon)," said Herreid, who has completed many long races on ski and foot, most recently a relay run across Norway.

Herreid has had a few helpers on the project over the years, but often he's been on his own, driven by the story he believes the rocks can tell. Most models of glacial melt don't have good solutions for rock cover.

He has captured the rocks' affects on glaciers this summer simultaneously at several levels. While he had temperature probes embedded throughout the rocks and on bare ice, he set out a thermal-sensitive camera that took time-lapse images. One night, as he slept under the aurora and stars, he watched satellites pass. One of them could have been carrying the instrument that captured a thermal image of the glacier.

"I got those measurements all at the same instant in time," he said. "Like a Russian nesting doll."

There are signs that summer work time is over. Sandhill cranes flying over the mountaintops croak their presence as they leave Alaska. Ankle-high willows drop their leaves of lemon yellow between boulders. Nights are ice cold after the sun drops behind Alaska Range peaks and a breeze whips down the glacier.

In one week, Herreid will be in England for his studies. Half a world away from the quiet of Canwell Glacier, he will look at his summer data and try to get closer to his goal: interpreting the story of the rocks and helping to apply it to all the mountain glaciers in the world.

For now, he accepts a little help hoisting a gangly backpack with projecting aluminum rods and dangling triangles of plywood. He swings his leg over his mountain bike and stands on the pedals. He turns and glides downhill on a rocky road as the sky turns a cold tangerine. Field season 2016 is complete. 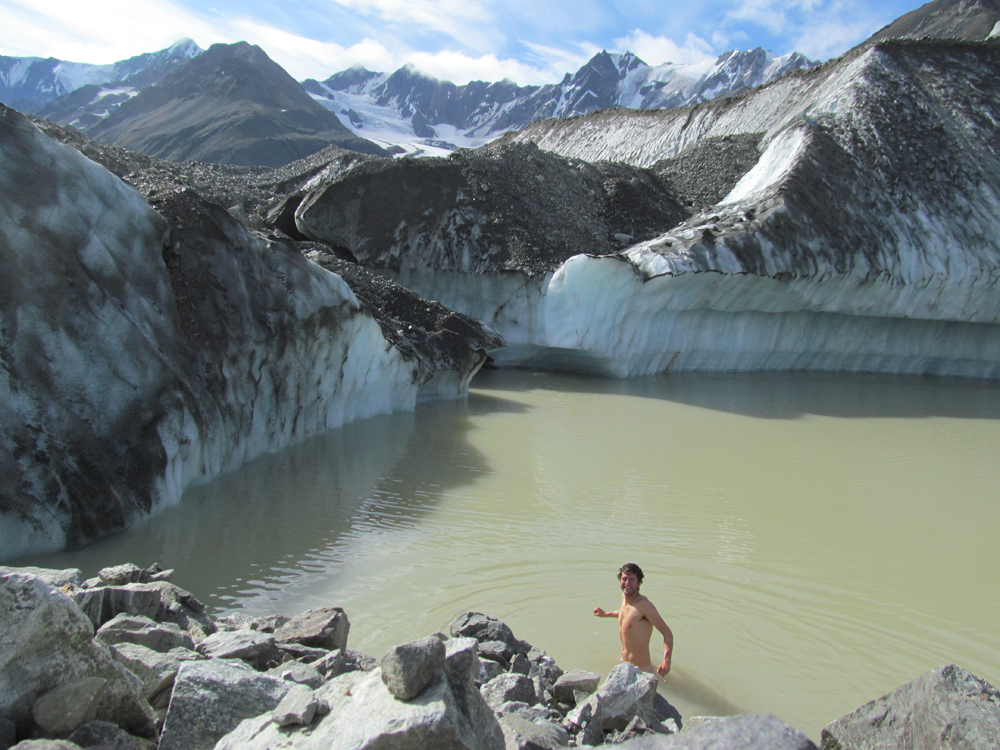 Glacier researcher Sam Herreid baths in a lake on Canwell Glacier in the eastern Alaska Range. Photo by Sam Herreid.