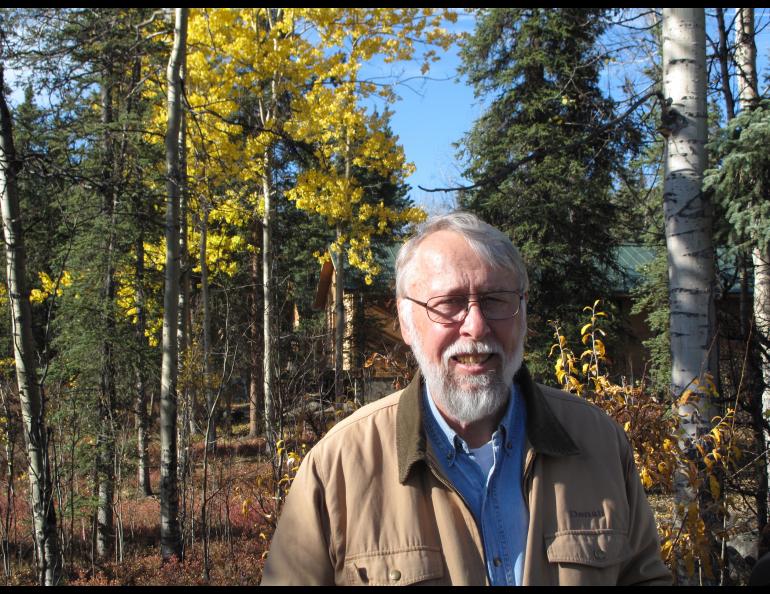 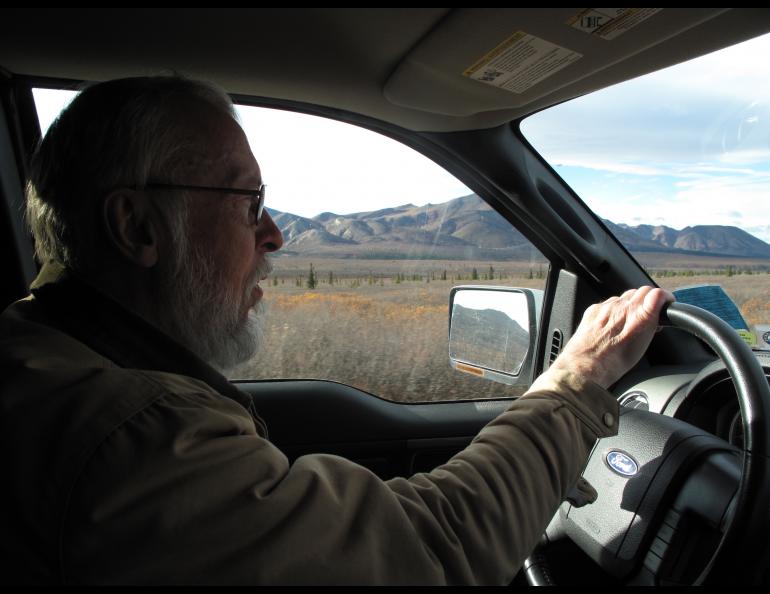 A bull moose looks at a photographer near Whitehorse, Yukon, in summer 2022. Photo by Ned Rozell.

Vic Van Ballenberghe died on Sept. 22, 2022, at the age of 78. The man who knew moose better than perhaps anyone else on Earth had stood amid their knobby legs for many springs and falls in Interior Alaska. I got to join him in the field once, 11 years ago. Here is my story from that day:

DENALI NATIONAL PARK — On a late autumn day, as naked stems of dwarf birch nod away from a warm breeze, a distant flash of antler reveals the object of our search.

“The hunters would love to see him,” Vic Van Ballenberghe says as he pulls his pickup to the side of the park road and grabs his binoculars. “He’s a trophy bull.”

The giant moose strolls over a brownish slope that waits for snow. The creature pauses at times, steering with massive antlers one of the cows that orbit him.

“He’s got seven with him,” Van Ballenberghe says of a group of blondish female moose.

The sight of eight moose at once is a treat for me, Van Ballenberghe’s guest for the day, but the 67-year-old biologist has stood close enough to smell the musk of these moose every spring and fall since 1980. That’s the year he first visited the park and knew he had found the perfect place to study the behavior of this iconic large mammal.

He noted how the Denali Park road cuts right through great moose habitat, meaning he could drive to where he began hiking to observe them. He saw plenty of moose along the road in 1980, animals that weren’t spooked by people. The bulls were large there, too, in part because of the park’s ban on hunting.

In 1980, Van Ballenberghe was a biologist with the U.S. Forest Service in Fairbanks. After visiting Denali Park, he wrote a proposal to see if he could make his dream study happen. The staff at Denali National Park thought it was a great idea, and the U.S. Forest Service funded the study. Since 1980, Van Ballenberghe has spent many moments in the close proximity of moose.

“It’s totaled up to thousands and thousands of hours,” Van Ballenberghe says.

Like one of the sandhill cranes croaking overhead on this fall day, Van Ballenberghe has migrated from his home in Anchorage to Denali Park both in spring — when cow moose give birth — and during fall mating season —when dominant bulls gather harems of cows and defend them from other bulls.

He retired in 2000, but has continued his study with support from the National Park Service, which provides him an apartment near its headquarters and gives him access to the moose in areas where others are not allowed.

During the last three decades, Van Ballenberghe and those who have worked with him have cranked out a library of published information about the Denali Park moose, including a nonfiction book, In the Company of Moose. Van Ballenberghe and others found that, in some years, eight out of 10 moose calves don’t make it to adulthood, with grizzlies eating half of them and wolves accounting for just 6 percent of calf loss.

Van Ballenberghe knows that Denali Park cow moose can live to be 20 (“it’s like a 100-year-old person”) and most of its bulls are gone by the age of 13. He once observed a cow that gave birth in almost the exact same spot for 12 consecutive years.

He knows moose prefer diamondleaf willow in summer and the frozen buds of feltleaf willow in winter, and they will gorge on mushrooms when they are available. He’s noticed that moose almost never sleep for more than five minutes at a time. He has seen a fall gathering of 22 cows and 12 bulls, and he knows that those bulls did not eat for more than two weeks until the rut ended in early October.

Van Ballenberghe has seen a 3-foot September snowfall in 1992 that jumpstarted a winter in which one third of his collared moose died from starvation. He also remembers 1981, when so little snow fell that he could have driven to Wonder Lake though no one was plowing the road. He has watched spruce trees invade a section of open tundra, and noted the crashes and booms of snowshoe hare and lynx (the latter of which now are more numerous than at any time he can remember).

Mostly, he sees and studies moose, sometimes approaching them so close he can hear them breathe. In this era of satellite tracking and circling animals with aircraft, he has kept alive what he described in his book as an “old-fashioned, naturalistic approach of directly observing wild animals at close range.”

He is critical of Alaska’s predator-control program, claiming that too much emphasis is put on killing wolves and that decision-makers don’t listen enough to scientists. “It took decades to establish science-based wildlife management in Alaska,” he says. “Now all that effort has been lost as politics primarily drives predator control.”

While most studies are considered long-term if a scientist keeps at it for four years, Van Ballenberghe’s work, at 32 years and counting, is a true outlier. This year, he will keep walking off the park road to observe his radio-collared moose up close until the beginning of October. One of the moose mysteries he still hopes to solve is whether a cow moose has an active choice in which bull fathers her calves. (Cows emit a “protest groan” that might be their way of rejecting a suitor by calling in a larger bull.)

On the Denali Park road, after a morning and early afternoon of driving in search of moose, Van Ballenberghe watches the big bull through trusted binoculars that have focused on more moose than probably any other pair in existence.

Making a mental note of the bull’s location and the number of cows in its harem, Van Ballenberghe sets down his binoculars. The dominant bull, whose genes will live on long after Van Ballenberghe’s time here is done, melts into the brush. One by one, its cows follow, until it seems there are no more moose in the world.

The late Alaska writer Sherry Simpson, one of the best at her craft, spent much more time than me with Van Ballenberghe. She used her experiences in writing her essay “Strange Grace.”

She wrote of Van Ballenberghe:

“He thinks they are clever and resourceful and really quite gorgeous in the way they fit within the boreal landscape. Maybe all wildlife biologists become enamored of their subjects, but I liked Vic for seeing moose as admirable and lovely, and for wanting me to see it, too.

“The more wildlife biologists I meet, the more I believe they tend to resemble their chosen subjects, and it’s true that Vic is a tall and rangy fellow, with a longish, melancholy face.

“He is a disciple of the old school of wildlife science, which prefers to learn about an animal by following it around, watching what it does, and trying to figure out why.

“Some biologists say they’d rather face an irritated bear than a moose with a calf, but I came to see that Vic’s quiet confidence soothes moose. When he comes upon them, he stands still, hands in pocket, and just looks.” 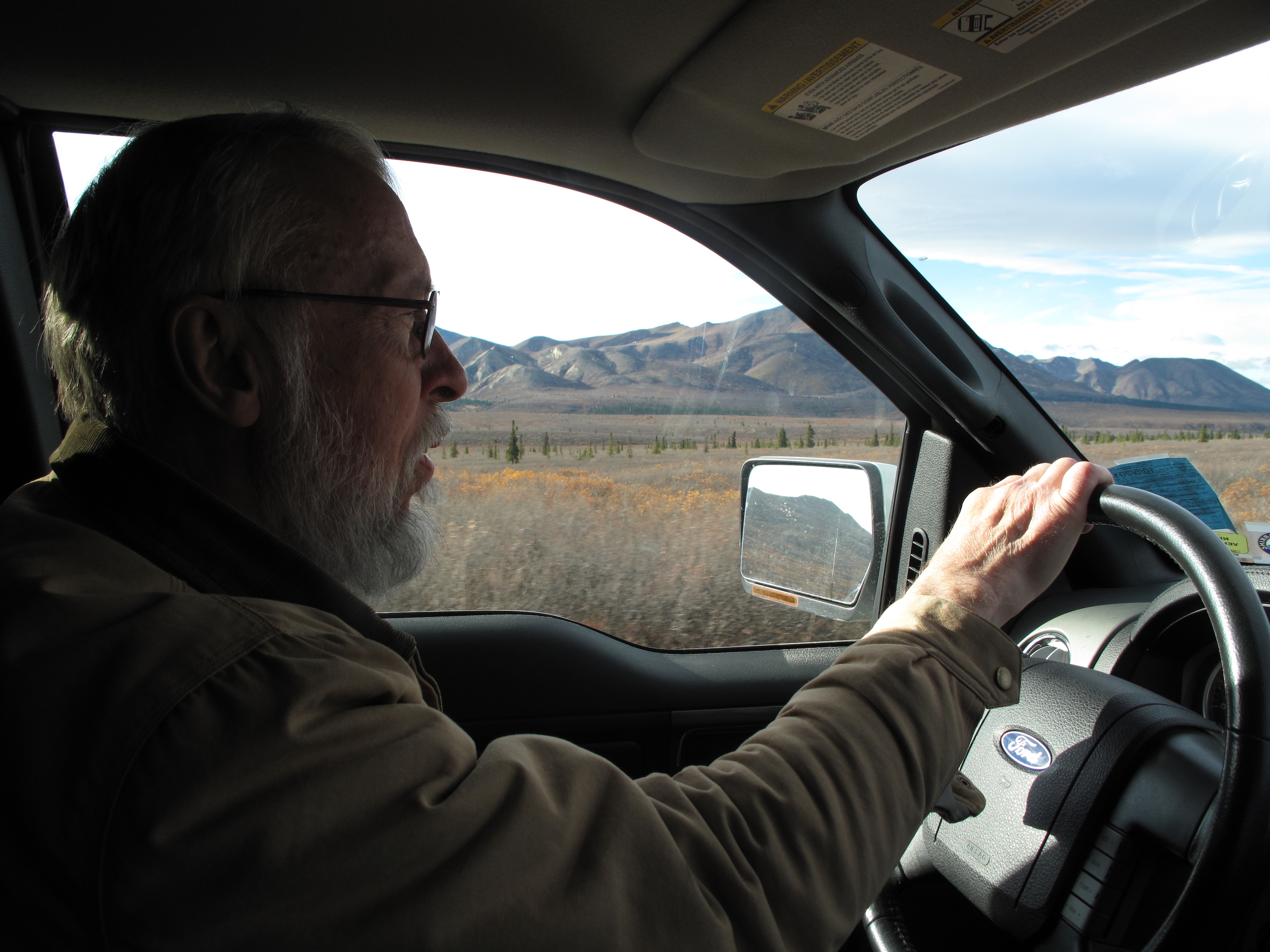 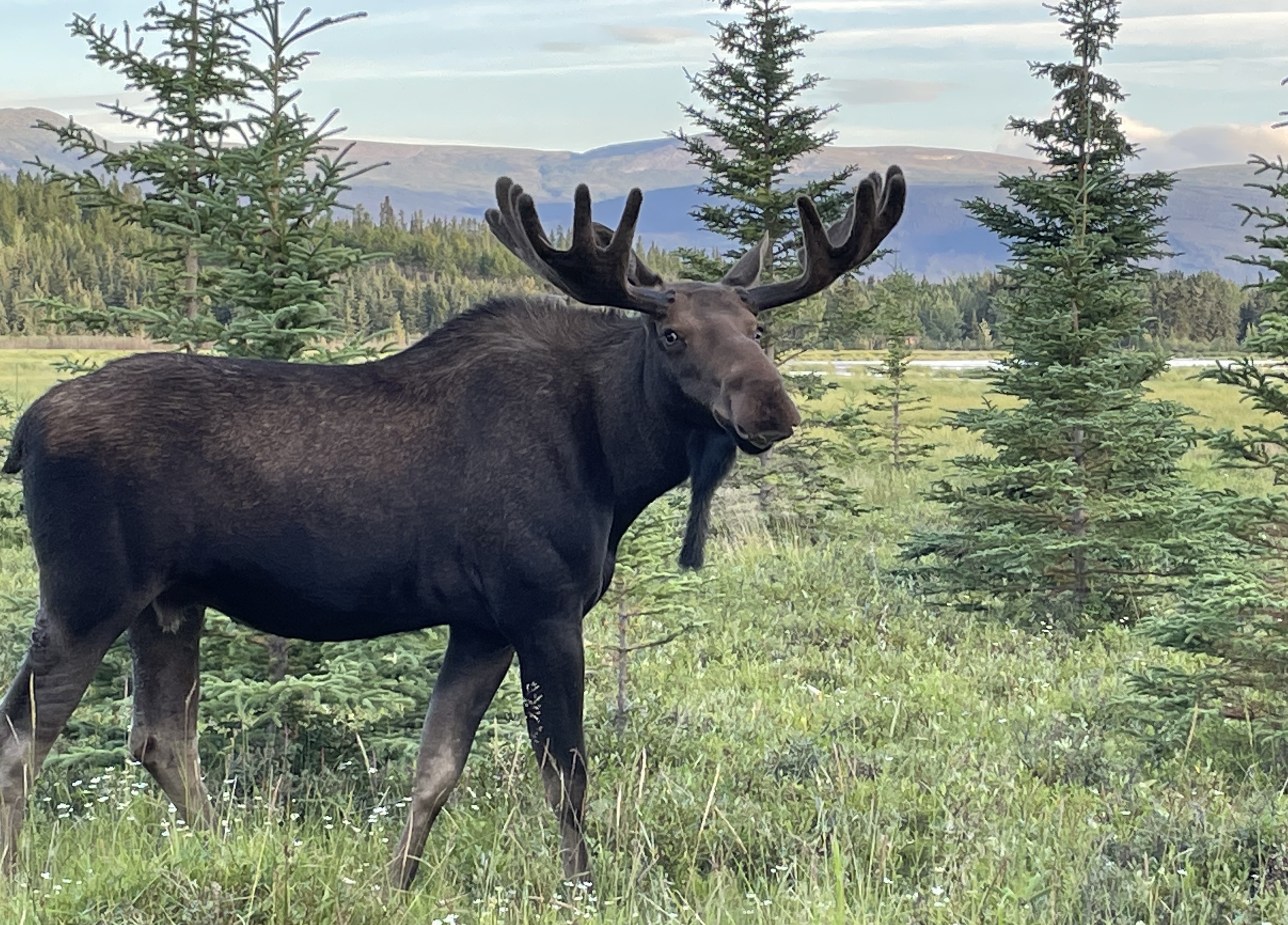 A bull moose looks at a photographer near Whitehorse, Yukon, in summer 2022. Photo by Ned Rozell.