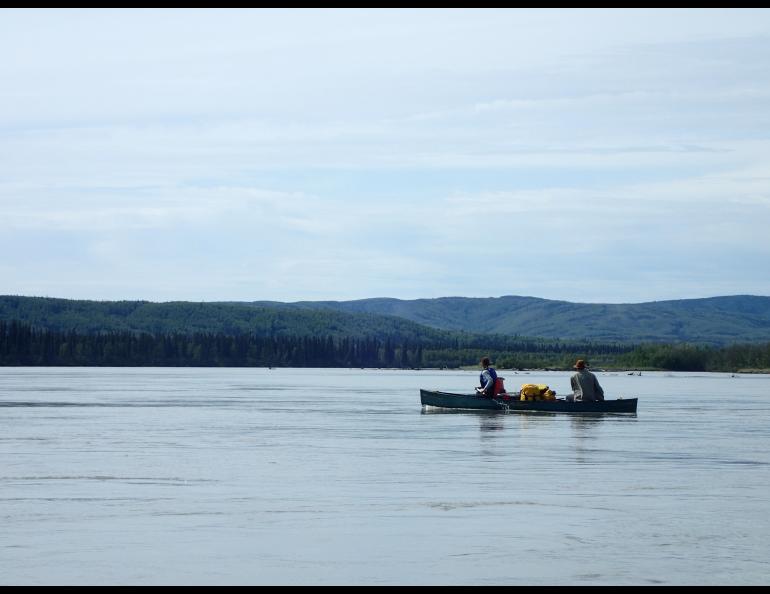 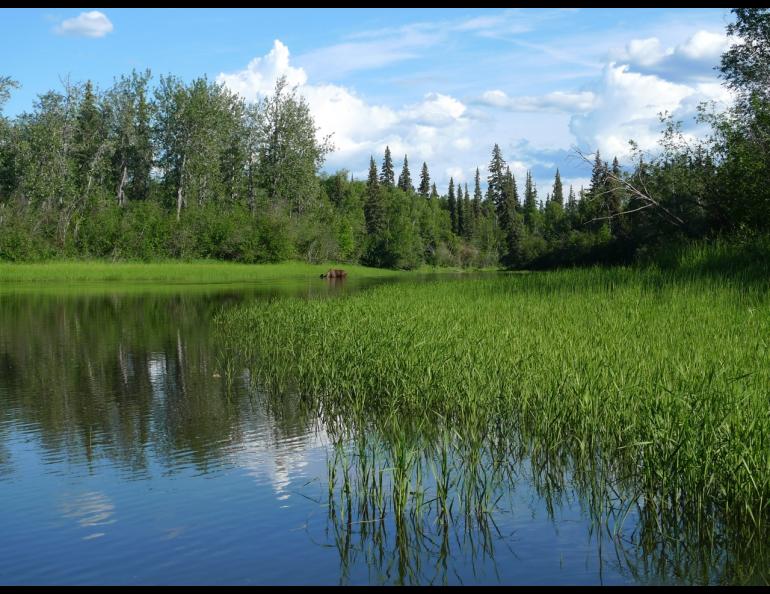 A bull moose in Fish Creek, a tributary of the Tanana River. Photo by Jason Clark.

Moose not easy to see on big Alaska river

LOWER TANANA RIVER — On a day like this 121 years ago, a hungry U.S. Army explorer passed here at the mouth of Fish Creek, where clear water collides with the cloudy Tanana. Henry Allen did not stop to fish. He had food, and further exploration, on his mind as he and his party paddled by in a skin boat.

We have stopped our canoes, squirted on insect repellant and cast lures hoping for pike or especially sheefish, the giant whitefish that lives here. We are also simply being present on this big Alaska river, making a count of animals Henry Allen did not see during his 1885 journey across Alaska.

In one summer, Allen ascended the full length of the Copper River and descended the entire Tanana River and portions of the Koyukuk and the Yukon. Allen and his scurvied companions saw zero moose from March to September. Nor did they see any caribou (and just one bear). Allen wrote this in a report to his superiors after his trip. His document is one of the first written accounts of Alaska's vast interior.

This summer 2016 trip was inspired by Allen's. Our party is two canoes launched from the town of Nenana. One contains me and my dog, Cora. Graduate students Jason Clark and Alison Beamish are in the other.

Clark is here to help with a project envisioned by his advisor, UAF ecologist Ken Tape. Tape studies moose populations and their fluctuations in Alaska. He finds it remarkable that a group of explorers did not see a moose in five months of crisscrossing the state. So do I.

Tape is recreating Allen's journey as best he can. Last year, he and Clark floated the Tanana River from Tok to Delta Junction. They saw 19 moose in that stretch. Like this trip, that one took place at the same time of year Allen traveled. Tape thinks observers would see at least 100 moose if the entire trip were taken today.

Tape sees retracing Allen's route as a nice tale of change. Why were there so few moose then, when the state hosts about 200,000 now?

What has changed to make things more favorable for moose? More willows? Less wolves? A steady warming trend that seemed to begin just before Allen's expedition in 1880?

Our trip from Nenana to Tanana, executed during the week of summer solstice, is not moosey. We see Arctic terns scissoring the sky above islands, fledgling great horned owls that resemble their lordly parents but are much fuzzier, beavers that slap the water with displeasure at our presence.

But no moose. A few fresh tracks of mamas and the whitetail-size prints of new calves in the mud, but not the big bodies you would expect to see while living outside on an Alaska river for seven bright days and nights.

We knew moose were there, just out of sight on clear tributaries with more shade and water in which to stand — for both insect relief and tasty aquatic plants that don't grow in the Tanana or Yukon.

Not seeing a moose on a summerlong trip on Alaska rivers seems pretty unlikely. But as we paddled along for days without seeing one, we felt it was possible. And at this point in Allen's journey with Sgt. Cody Robertson and Pvt. Fred Fickett in 1885, the men were more concerned with making miles than seeing moose (though they surely would have harvested any large mammal within reach of their bullets). They anticipated there might be food for beg or barter at today's village site of Tanana, where the Tanana River empties into the Yukon. They paddled their skin boat for at least 12 hours each day to make it to the junction of the big rivers. When they got there, to a place they called Nuklukyet, the paddlewheelers with supplies were still far downriver; the trading post proprietor had little left of the previous winter's supplies. "We must live on fish fried in machine oil," Allen wrote.

On our last full day of floating, Clark stands up in his moving canoe to better survey a break in the spruce trees. To his surprise, there is a bull moose with velveted antlers. It stands, ears flicking at flies, in a field of wet grasses. Our first moose shows up about 12 miles from Tanana, near the end of our 160-mile portion of Allen's route.

One-half mile later, we pull into the mouth of Fish Creek. Clark and Beamish paddle around a bend of the creek and see again a bull moose in velvet, now standing in the creek. It might be the same one Clark saw from the Tanana, he thinks.

Our score, for a small portion of Allen's route: Two (or 1) moose, to his zero. 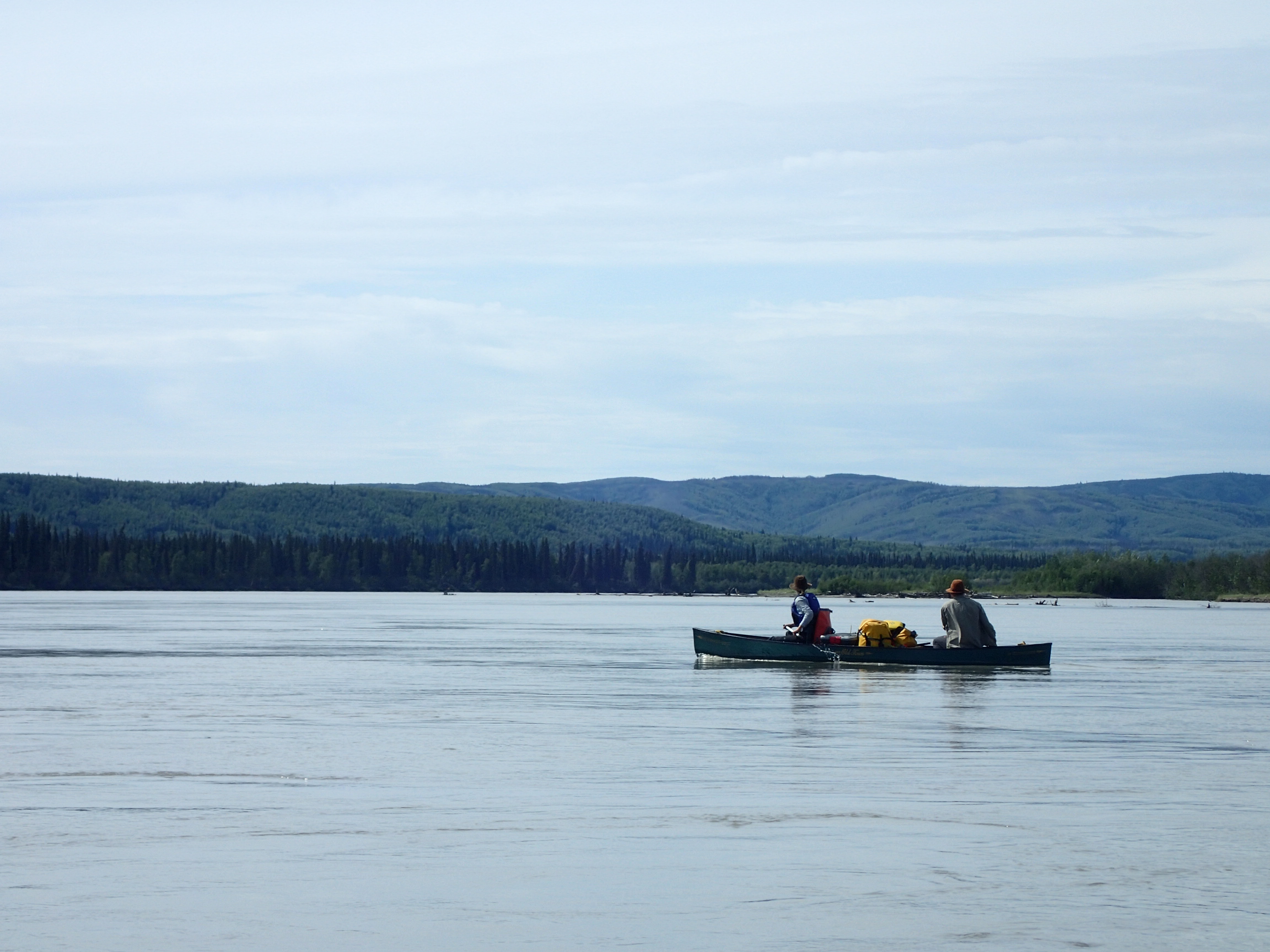 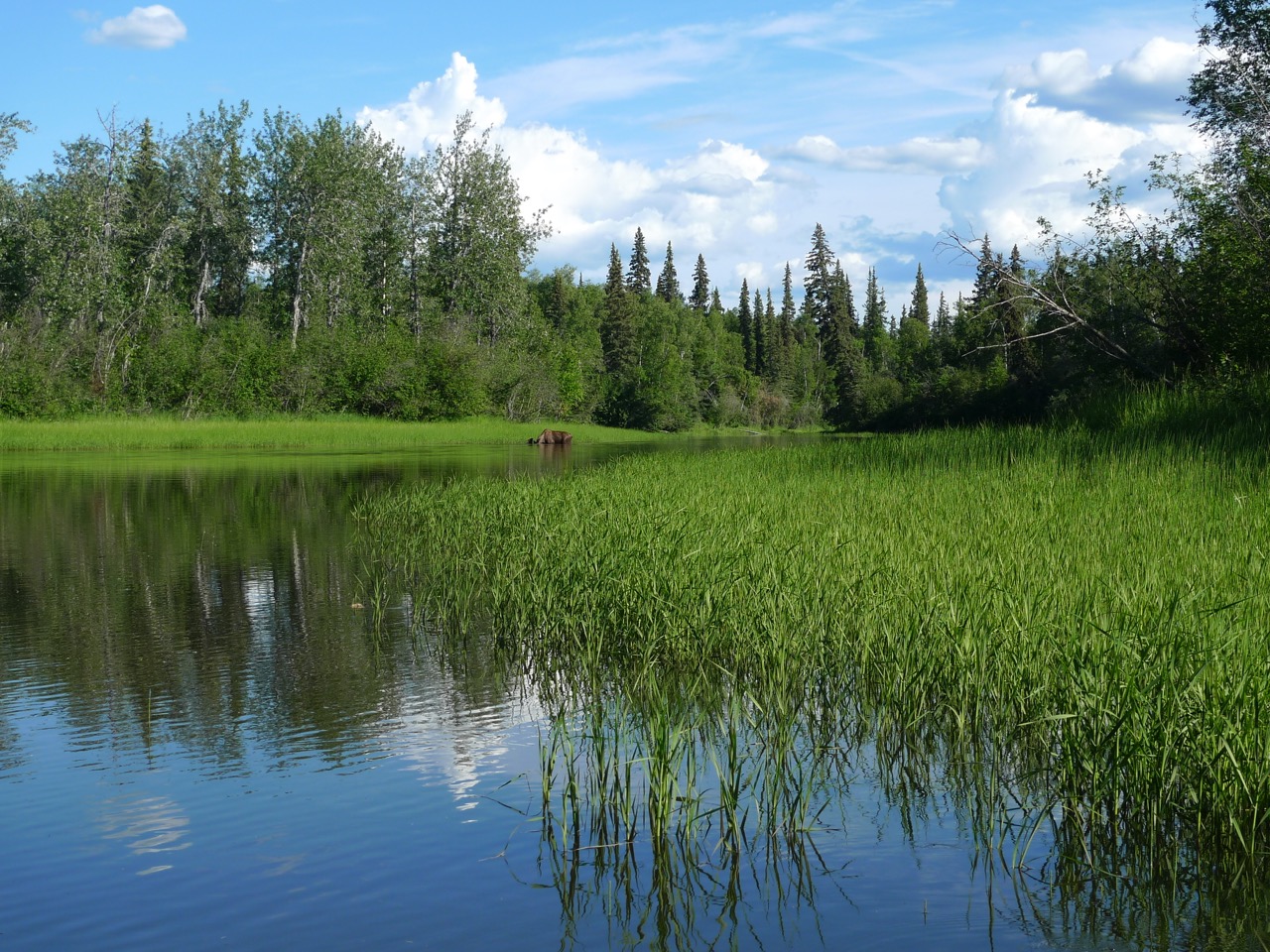 A bull moose in Fish Creek, a tributary of the Tanana River. Photo by Jason Clark.