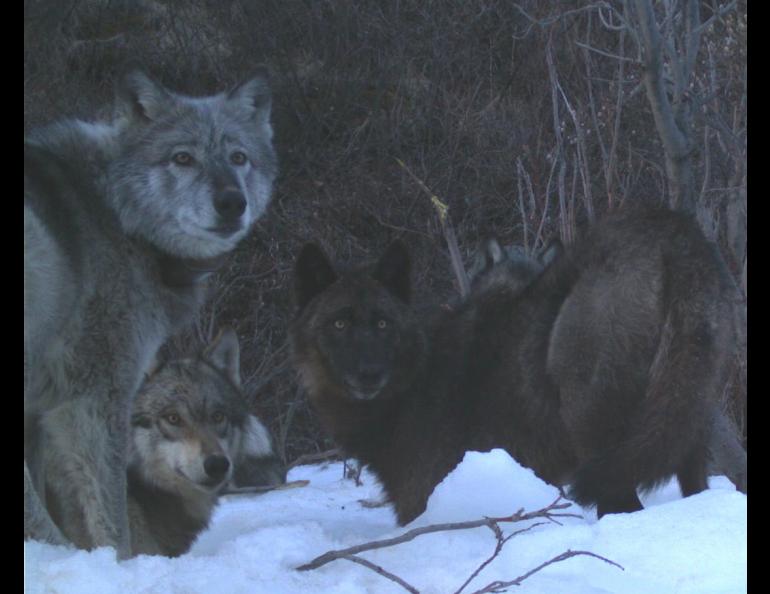 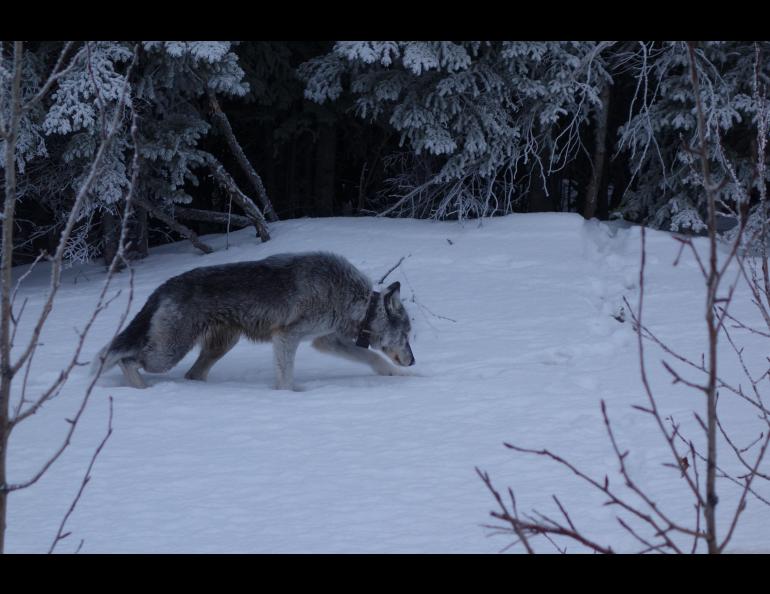 A 9-year-old female wolf with a satellite collar limps alongside the highway near Denali National Park in February, 2019. Photo by Ned Rozell.

As I was driving down the highway, I saw a shaggy, gray-black canine cruising along on the snowpack, right next to the road. Could it be one of the hardest animals to spot in Alaska, a wolf?

I pulled over and stopped. The wolf padded along the treeline, getting closer.

A few things stood out: (1) It was limping, its back-right foot not touching the ground. (2) It did not seem to mind my presence, just 30 feet away. (3) The wolf was wearing a leather satellite collar.

The next day, I drove to the headquarters building of Denali National Park and Preserve. I walked into the offices. There, I met a woman wearing a garbage bag.

I described the wolf I saw the day before.

Klauder is a wildlife technician at the park. She had a garbage bag draped over her because there was a dead wolf curled on a steel table nearby. She was about to examine it. That wolf — not the one I saw — had died deep within the park. Klauder and wolf biologist Bridget Borg would perform a necropsy to see how the young female died.

The biologists identify the wolf I saw as 1202, the “12” signifying when they first captured the female and fitted her with a satellite collar in March, 2012.

“She’s the last survivor of the Riley Creek pack,” Klauder said. “She’s turning 10 in May. That’s old. By the time a wolf is six or seven, it’s made it a long ways.”

Bridget Borg, Denali’s wolf biologist, said that thanks to that fist-size collar that transmits a blip to a satellite every six hours, they knew the life history of wolf 1202. For this story, I have named the wolf Riley.

Born in May, 2009, Riley first saw sunlight after crawling from a hole dug in the roots of an old spruce above the Teklanika River. Foreshadowing Riley’s future, her mother was a dominant wolf who led the East Fork pack for a decade, giving birth to a few dozen pups over the years.

Assertive wolves like Riley’s mother are the ones that breed, that fight, that have the ability to pull down a caribou with their mouths. Other pack members still hunt and fight, but don’t make decisions for the group, or breed. Some, wanting independence, take off, which is a high-risk, high-reward scenario.

When Riley was three years old, in March 2012, park biologists darted her and fitted her with a satellite collar. In the field notes, a biologist noted Riley’s personality: “Aggressive to helicopter.”

Riley was a bonus wolf for the biologists. They had already collared the breeding female for the pack. Riley, they guessed, would be one of the followers, more likely to die or wander off than the breeding pair.

By autumn of the next year, Riley did one of the most dangerous things a wolf can do: she split. Biologists call this dispersing. Any wolf out on its own is at great risk of death by other wolves. It is one of the top two natural reasons most wolves won’t die of old age. The other is starvation.

Riley survived, and she became a leader. She started her own family just south of the East Fork pack, which had shifted its range a bit north. When Riley had four pups at a den site close to the park road, biologists named the Riley Creek pack.

Interested in this new development so close to park headquarters, park biologists darted and collared her mate, a black, muscular male who was, at 3 years old, two years Riley’s junior. I’ll call Riley’s mate Midnight (rather than 1406).

Riley turned 6 in 2015. Biologists noted her coat was “dark blue” and she again denned within the same burrow in the hill not far from the park road. She had five pups. Many visitors to the park saw Riley and her pack; the animals chose to meet often in a spot that was visible from the road.

The next summer, Riley gave birth to pups in a different den on the Sanctuary River. Eight of them survived. The Riley Creek pack had grown to 14.

That was a lot of mouths to feed, but also a lot of muscle with which to expand their turf.

After a series of chases and battles, two Grant Creek females, including the matriarch, lay dead. When biologists inspected the frozen bodies of the dead wolves, they noted each was missing a front leg, which seemed to be have been severed after they died.

“It’s all very Game of Thrones out there,” Klauder said.

The rest of the Grant Creek pack scattered.

The Riley Creek pack had almost doubled its acreage of boreal forest, high mountains, graveled riverbeds and tundra hillside. The wolves needed it to satisfy the need for about 2.5 pounds of food per wolf each day. (That’s an average; wolves can go a week without food, then gorge on 20 pounds of moose in a day).

Times were good in summer 2017. Riley was eight years old. Her silvery coat showed her age, but she still gave birth to pups, five of whom survived the summer. The Riley Creek pack numbered 17.

With that many bodies floating over the snowpack in search of food, the pack expanded its range to the north. There, trapping is allowed outside the park, on state land bordering the Stampede Trail.

In January, 2018, Riley’s mate, Midnight, died there. His last location was along a known trapline.

“That was the beginning of the end (of the Riley Creek pack),” Klauder said.

Biologists also noticed uncollared wolves in the pack had disappeared by February 2018. The pack was down from its peak of 17 animals to 7 or less.

Riley persevered without her mate. A trail camera recorded her chasing a wolverine from her pack’s moose kill in February, 2018.

One year ago, in March 2018, Borg recaptured Riley and fitted her with a new collar with a fresh battery. Borg noted that Riley weighed 98 pounds, her belly bulging with meat. Her coat was “light, silver gray.”

Last summer, at the Teklanika den, a trail camera showed 9-year-old Riley and four pups that were playing together. By August, though, pilots reported seeing Riley but not the pups. They did, however, see a collared wolf from the pack, perhaps Riley, chasing a grizzly bear and biting him on the butt.

In January 2019, Klauder was walking her dog on the closed road that leads into Denali National Park. She saw fresh wolf tracks in the snow and followed them to a pillow-shaped indentation in the snow. There, she also saw spots of blood. She hoped that she might have found the sign of Riley. A pilot confirmed seeing the only remaining member of the Riley Creek pack limping four miles further down the road. That news made Klauder smile.

What happened to the other members of the pack? The biologists don’t know.

“One week there’s eight wolves, the next week there’s four,” Klauder said of the spotty information the collars give, enhanced by flights during which pilots and biologists watch and count the animals. “Really all we know is how much we don’t know.”

As for Riley, the wolf with the bum leg and squinty eye that did not even glance my way is still alive and moving.

“Yeah, she does look really bad,” Borg said. “But she is tough.”

If Riley survives a few more months, in May she will join a small percentage of wolves that reach the age of 10. With that maturity comes the experience that helps wolves avoid mistakes, but time is the foe that has never been defeated.

“As far as wolves go, she was a very successful one,” Klauder said. “She was able to go out and start her own pack, and have a lot of pups. She had a big territory and pushed back other packs. And then she got old.” 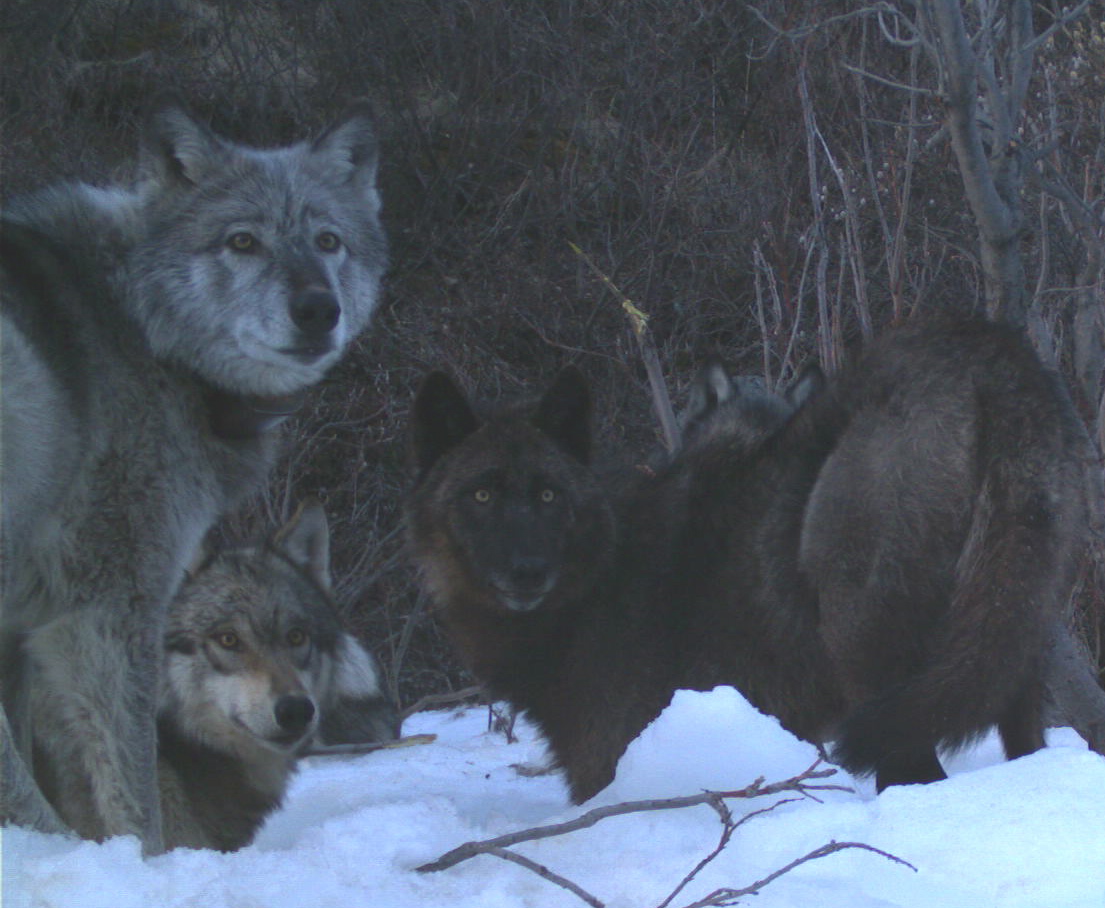 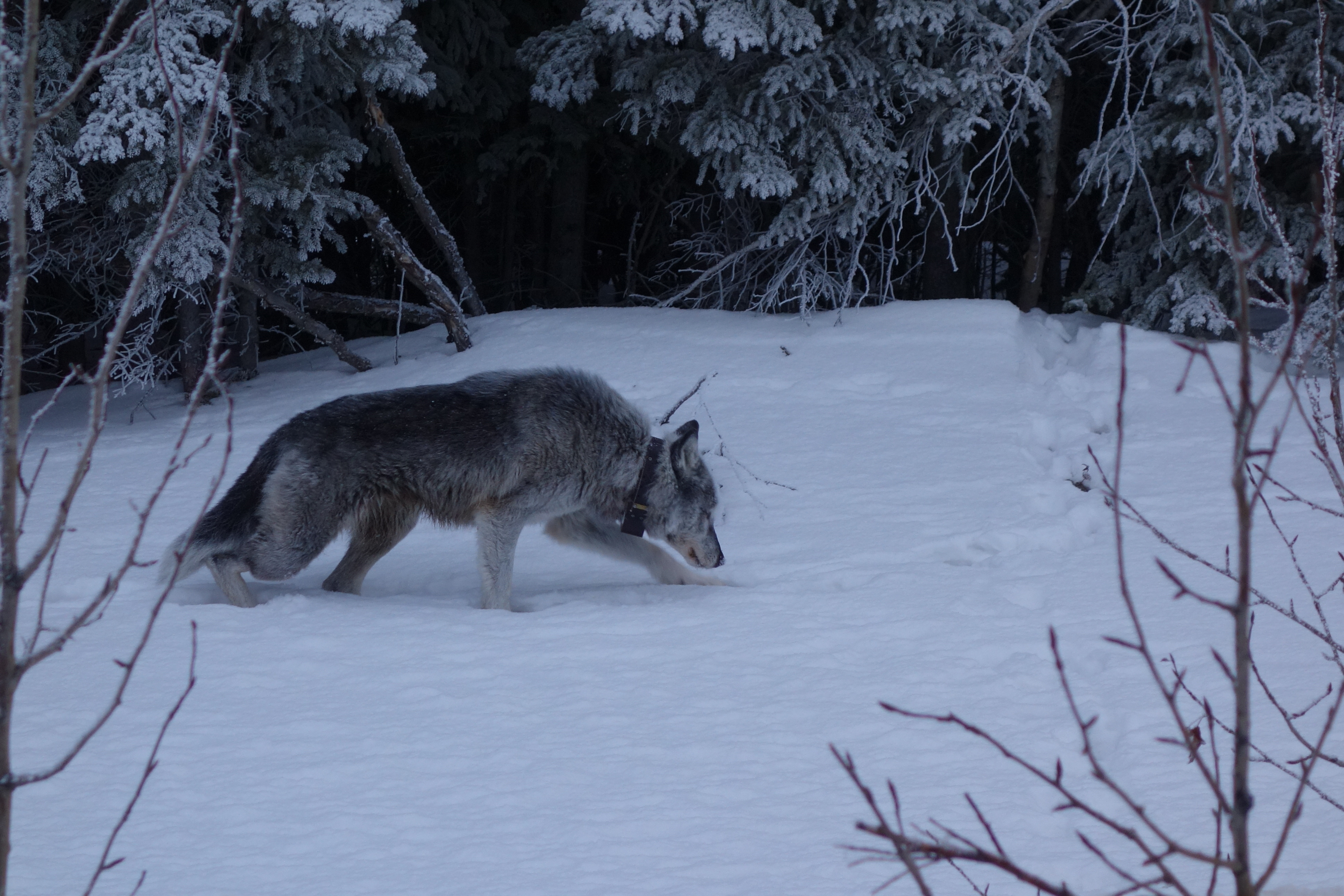 A 9-year-old female wolf with a satellite collar limps alongside the highway near Denali National Park in February, 2019. Photo by Ned Rozell.