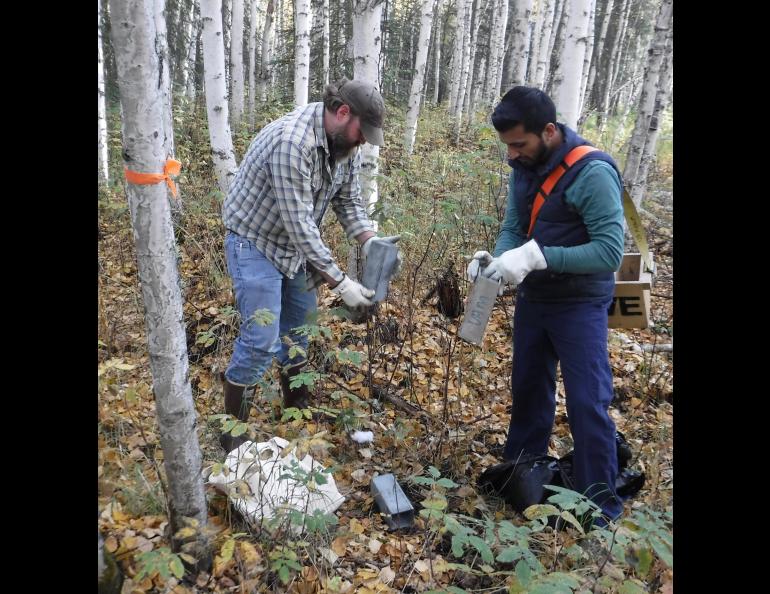 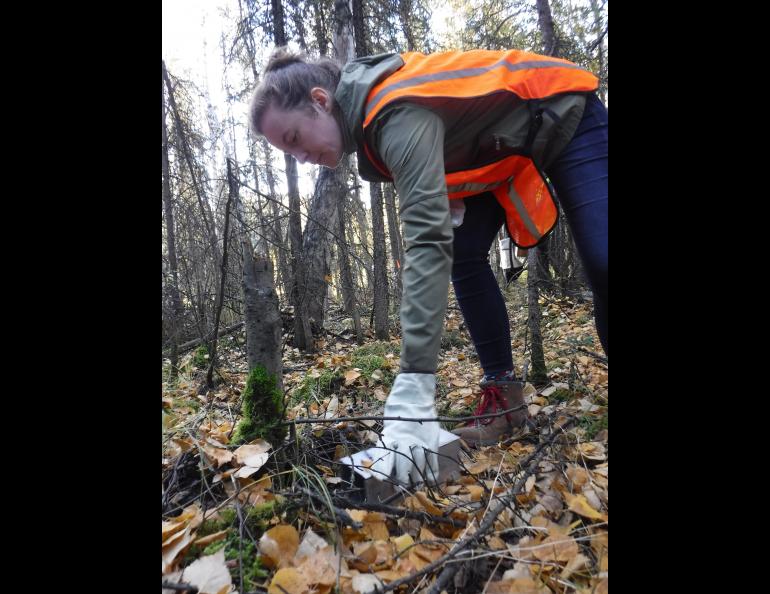 Katherine Newell of the Alaska Department of Health and Human Services in Anchorage checks a trap set for voles and squirrels north of Fairbanks, searching for signs of the never-before-documented Alaskapox virus. Photo by Ned Rozell.

Here in middle Alaska north of Fairbanks, a trapper wearing a flannel shirt, leather gloves, and a bushy beard tromps through the forest. He spreads his arms wide to part wild rose bushes as he steps toward his traps.

On this crisp, cool fall day in 2021, this trapper — who lives in Atlanta and works for the Centers for Disease Control and Prevention — hunts for a virus that was unknown to humans until 2015. That’s when a Fairbanks doctor examined a lesion on a woman’s shoulder.

Jeff Doty, the trapper, is a biologist with the CDC. He has captured ferret badgers in Taiwan and rats suspected of carrying monkeypox in the Congo Republic. He and four other team members have travelled all the way to Fairbanks — and then driven half an hour north — to learn more about a novel virus that can spread from animals to humans.

In 2015, a Fairbanks woman came to a local clinic to check out a rash she thought was a spider bite on her shoulder. She had a fever, was quite tired, and her lymph nodes were tender.

Her doctor suspected a virus and sent a swab sample to the Alaska State Virology Lab. Eventually the sample showed positive results for an unknown virus.

In August 2020 and July and August 2021, three more people in the Fairbanks area went to the same doctor — Zachary Werle — to have similar lesions on their skin checked. Werle found they, too, had the Alaskapox virus.

The Fairbanks people infected with Alaskapox have all fully recovered and there is no evidence the virus spreads from person to person. Alaskapox intrigued experts because 2015 in Fairbanks was the first time it was ever identified.

That is why Doty and his colleagues Faisal Minhaj and Florence Whitehill, along with Katherine Newell of the Alaska Department of Health and Human Services, broke cobwebs with their noses as they walked the moss toward their traps.

“Trap is closed,” Doty said to Minhaj, indicating that the trapdoor of a crackerbox-shape aluminum trap on the forest floor had shut.

Inside the trap — one of 40 such devices the researchers placed in the woods and baited the night before with oats and peanut butter — was a northern red-backed vole. On that 30-degree morning, other traps contained a northern flying squirrel, an American red squirrel, and two more voles.

The scientists will transport the animals back to a lab at the UA Museum of the North in Fairbanks, where they will take tissue and blood samples of the animals. Samples from 2020 showed antibodies for the Alaskapox virus in the blood of local squirrels, voles and shrews, and also the virus’s genes in tissue samples.

Experts think the Alaskapox virus can be transferred from tiny forest creatures to people, perhaps by pets. A few of the Alaska patients had cats. Those people live in the boreal forest, which is teeming with voles, shrews, and squirrels.

Researchers don’t know why the unique organism showed up six years ago, but “with any emerging pathogen, it’s really useful to learn more about it,” Katherine Newell said as she drove away from woods in which her team trapped.

Link Olson, the Curator of Mammals at the UA Museum of the North, will provide the CDC with frozen tissue samples of red squirrels and voles collected long ago and stored at the museum.

When they analyze the Alaskapox virus, researchers may find that the it has been inside the bodies of local mammals for a long time. Some viruses can also survive being frozen for hundreds or thousands of years.

“The Alaskapox virus represents a very long branch on the pox-virus family tree, which suggests that it’s a very ancient lineage,” Olson said. “So we know it’s not a new virus in that sense.” 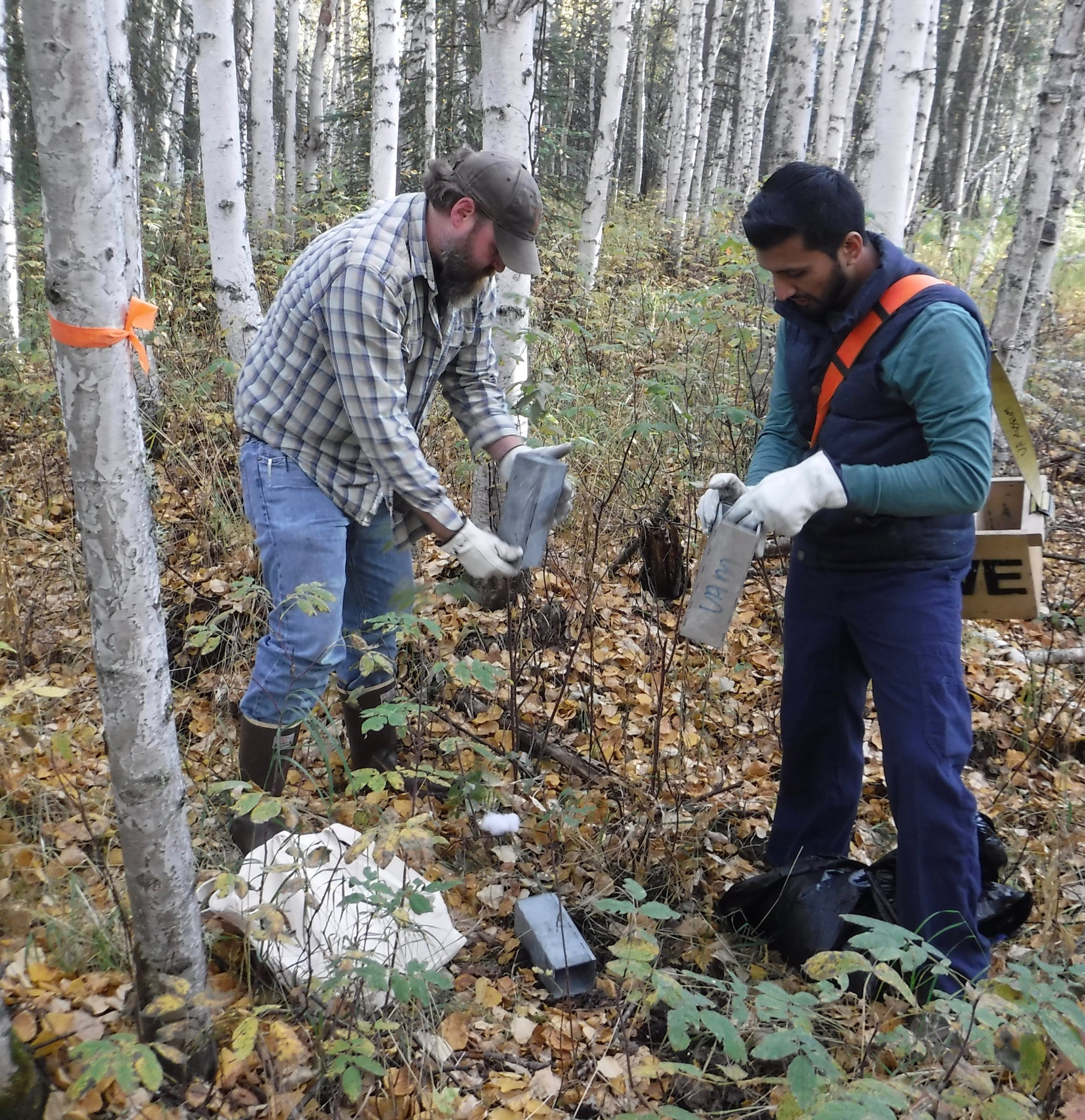 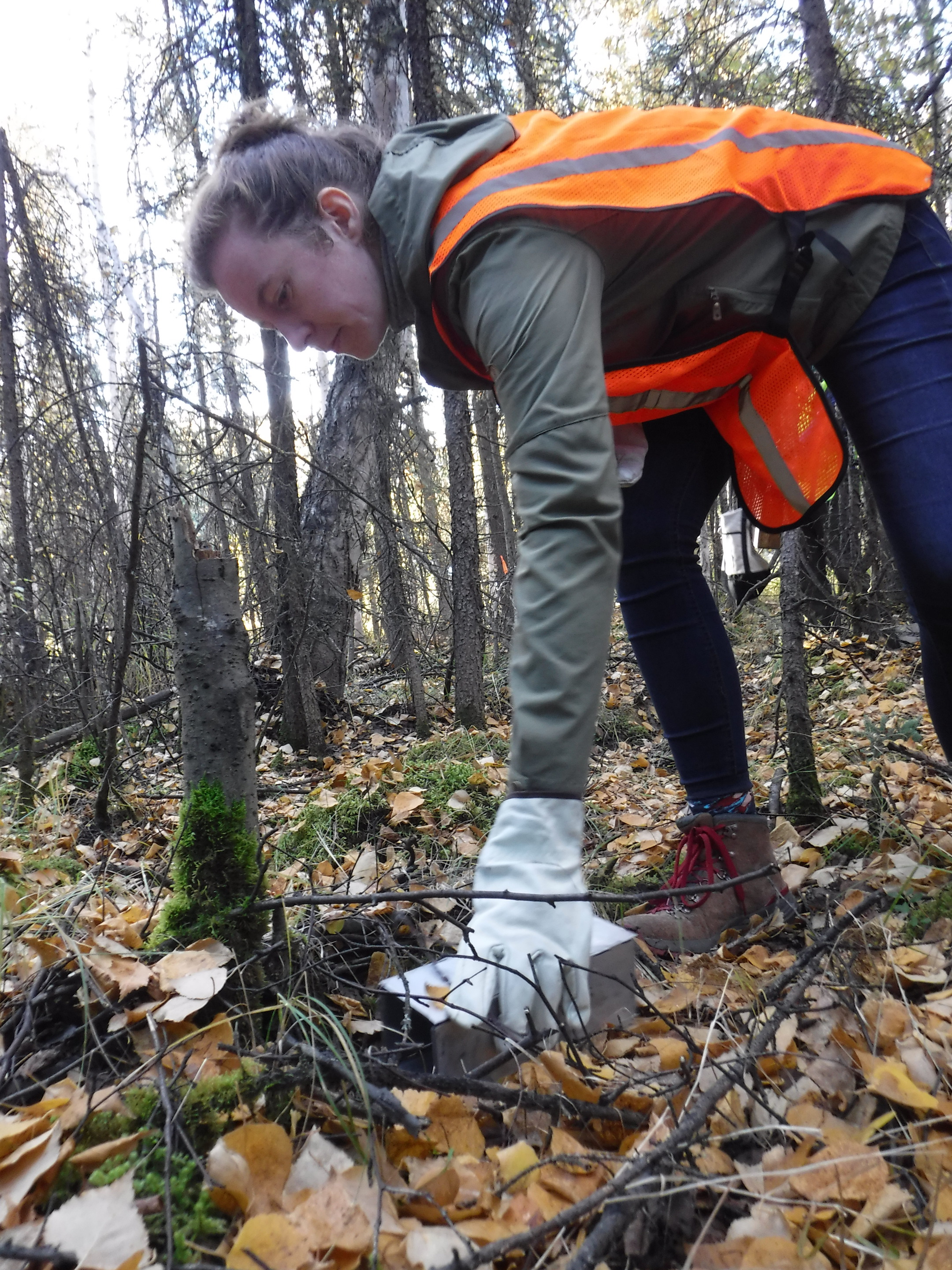 Katherine Newell of the Alaska Department of Health and Human Services in Anchorage checks a trap set for voles and squirrels north of Fairbanks, searching for signs of the never-before-documented Alaskapox virus. Photo by Ned Rozell.