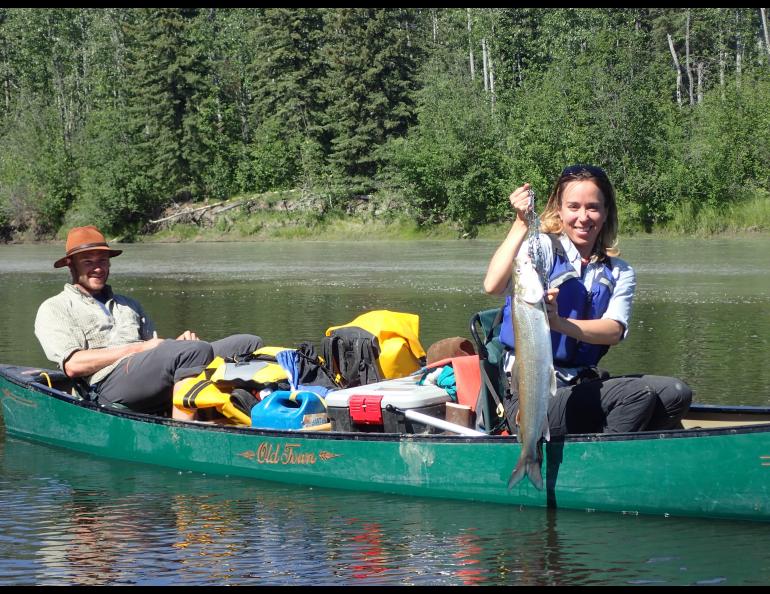 Alison Beamer displays a sheefish Jason Clark helped her land on the Zitziana River, which she paddled up on a Tanana River trip. Ned Rozell photo.

ZITZIANA RIVER — Fishing at the spot where this long, squiggly stream mixes with a floury channel of the Tanana River, Alison Beamer feels a thump.

Line squeals from her spinning reel as a creature as long as her arm flashes beneath the surface. After a few runs east and west, the fish tires, becoming still beneath the clear surface. Beamer's canoe-mate Jason Clark nets and dispatches the fish. He then threads it on a stringer.

Beamer holds the sheefish up in the sunlight. It's a stunning fish none of us has seen before, though the the lobster of the north is common enough in northern Alaska rivers. Its long, polished silver body gleams purplish in the sun. Its mouth is U-shaped and seems big as a bucket.

This giant member of the whitefish family is found only in a few dozen river systems of North America and Asia. North of the Arctic Circle, in the Selawik and Kobuk rivers, elder sheefish can get to 60 pounds. Beamer's fish is maybe five pounds, but it seems too large to live in a river narrow enough to throw a rock across.

Sheefish sometimes migrate, but not like salmon. This fish, from the Minto Flats population of sheefish, probably spent the winter in the Zitziana or another river close by. Other populations of sheefish, like those on the Selawik and Kobuk rivers, winter in the brackish waters of Hotham Inlet and Selawik Lake, according to Kenneth Alt of the Alaska Department of Fish and Game.

Sheefish can live to be 30 years old, about as long as a fortunate raven or walrus. With their sheer size, they seem out of place in this world of northern pike and grayling, as early explorers of northern Canada noted when they called sheefish poissons inconnus, unknown fish.

Sheefish are an important food for villagers. People in Selawik, for example, eat them all year long by netting them in summer and jigging for them beneath the ice.

And what a fantastic food they are.

We filet Beamer's fish and set the two pieces on a grill over the fire, skin-side down. When the flesh cooks a bit and separates from the skin, Clark flips it over with a spoon, the skin acting as foil.

With a little butter, lemon and garlic powder, the meat is heavenly. A texture like halibut and a taste reminiscent of both crab and lobster. The northern pike we have been eating have dropped a notch, behind this beautiful creature hidden within a few moving waters of the far north.

A few notes on past columns:

Richard Flanders of Fairbanks wrote in response to a video of many animals visiting a seismic station in Minto Flats. "Animals eat the insulation off wiring these day because much of it is made from a soy product," he said.

And my friend Walkie Charles, a linguistics professor at UAF who grew up on the lower Yukon River, told me the Yup'ik word for the mysterious foam that piles up on river water.

"Qapneq," he said, his word sounding light and ephemeral like the foam itself. "When my father saw qapneq he said it meant the fish were coming."

photo: Alison Beamer displays a sheefish Jason Clark helped her land on the Zitziana River, which she paddled up on a Tanana River trip. Ned Rozell photo. 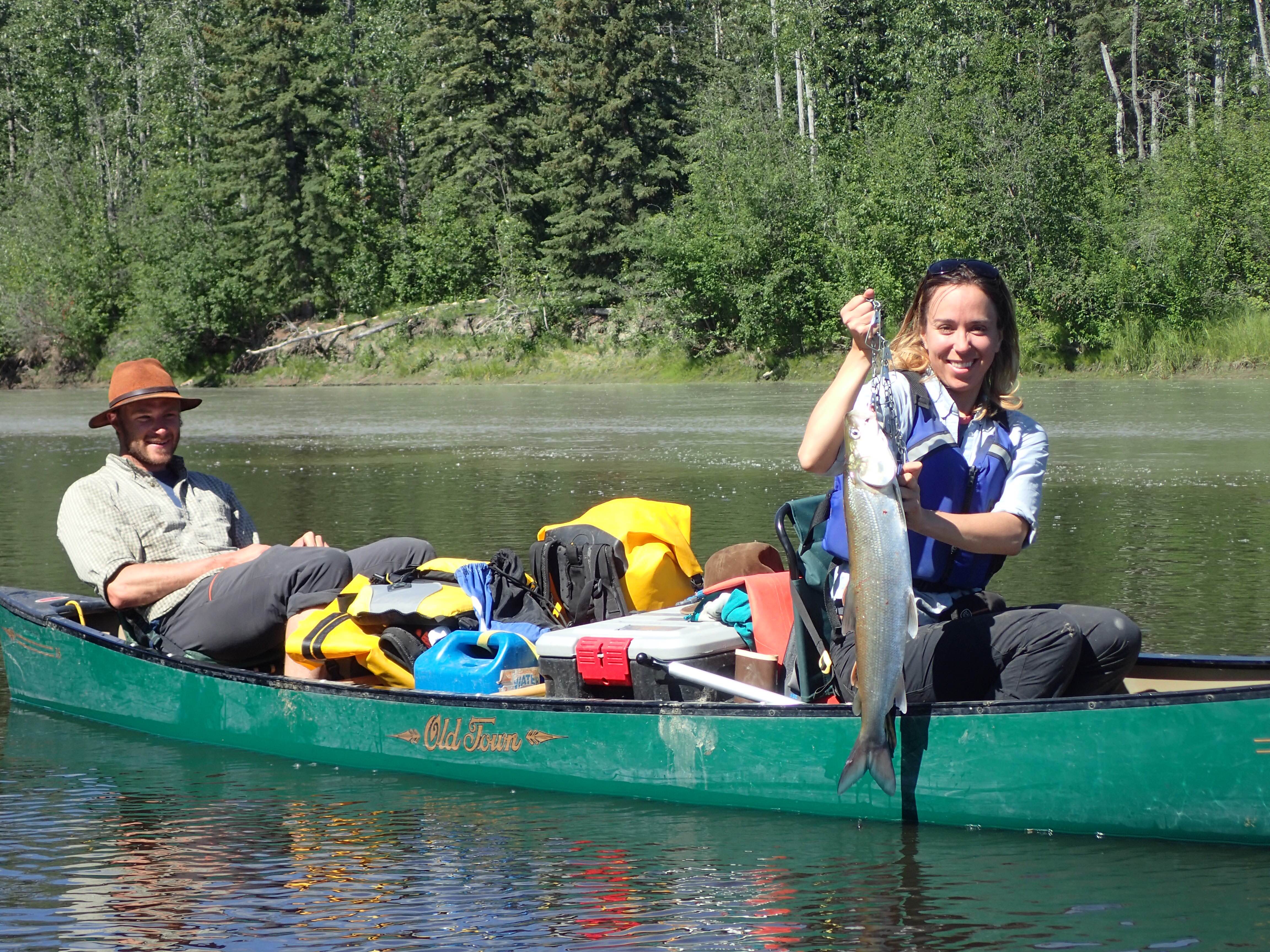 Alison Beamer displays a sheefish Jason Clark helped her land on the Zitziana River, which she paddled up on a Tanana River trip. Ned Rozell photo.