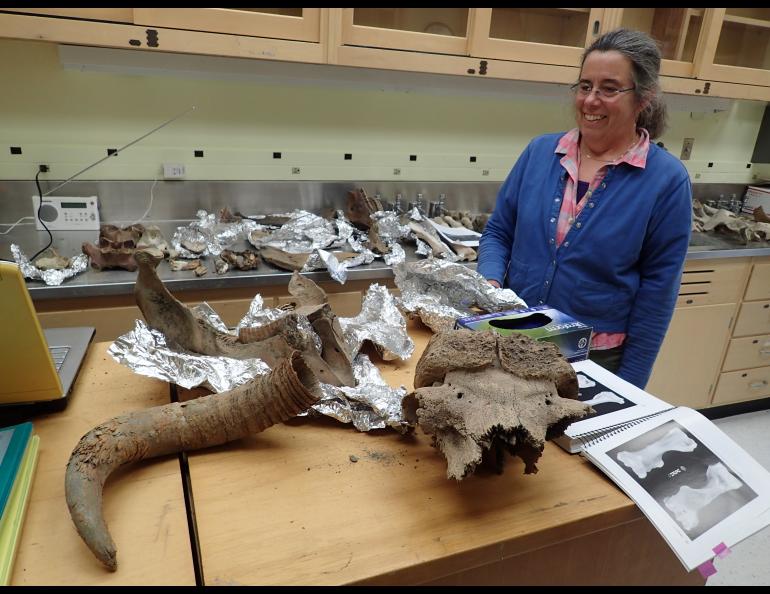 Pam Groves of the University of Alaska Fairbanks looks at bones of ancient creatures she has gathered over the years from northern rivers. The remains here include musk oxen, steppe bison and mammoth. Photo by Ned Rozell.

What killed the world’s giants?

Most of the large animals that have walked the surface of Earth are no longer here. Why?

Dan Mann thinks it’s because our recent climate has been too stable, at least when compared to the wacky ups and downs of the last ice age.

Mann, a University of Alaska Fairbanks professor, presented his idea at a recent lecture on campus. Mann is an expert on former worlds, especially that of Alaska, where along northern waterways he and UAF’s Pam Groves have found thousands of bones of extinct horses, along with the hardened remains of lions, giant short-faced bears, mammoths and mastodons. A couple of years ago, while paddling down a sluggish Arctic river, they found a 40,000-year-old steppe bison eroding from a hillside.

Groves is a co-author with Mann on a 2019 paper about what might have caused the extinction of so many large animals at the end of the last ice age, about 11,700 years ago. Many people blame humans, who had a need to hunt and the tools to get the job done.

More likely, extinction is a combination of factors that spell the doom of a species, Mann said.

“There’s no silver bullet that killed them all.”

Looking back over what they can piece together about the past millennia, Mann, Groves and their co-authors say the Holocene — the era in which we live — is too vanilla for large animals to dominate. Great swings in climate favor animals that weigh more than 100 pounds, he said.

“The small, meek and cute inherited the Earth. Climate stability favored them.”

Over the last 100,000 years, 64 percent of large animal species have gone extinct. The loss of large animals like mammoths, mastodons and giant ground sloths has been somewhat evenly spread over all the continents — except Africa, which has lost less than 20 percent of its large animals.

During the height of the last ice age, 20,000 years ago, much of Canada was beneath 9,000 feet of ice. That ice sheet extended well into mid-America, though much of Alaska was ice-free at the time.

Using records of ancient climate found in deep ice cores and from other sources, scientists have found that the last ice age was unstable compared to the most recent 12,000 years. During the ice age, every thousand years or so featured wild temperature swings.

“The ice age is a time of crazy, rapid change,” Mann said. “To keep up, you really have to be on the move, whether you’re a plant or an animal.”

Mastodons and the like were good at dealing with huge environmental changes, Mann said. Large animals are better than small ones at hoofing long distances to find new food, and are more able to get the most out of the food they are eating and endure periods of starvation. If their favorite forests went brown due to increased warmth, for example, giant ground sloths could shuffle on to find greenery.

Smaller creatures, like foxes and voles, fit better in today’s world of predictable boreal northern forests, alpine meadows and low-lying deserts that have not changed much. Since the ice age, large beasts have perhaps not been as able to use their evolutionary advantages.

Mann bases his hypothesis in part on an idea of Pleistocene expert Dale Guthrie, who lives in Fairbanks. Guthrie said that northern summers during the ice age were longer, which allowed more plant species to live in Alaska. With the shift toward our present climate, growing season became shorter and more nutritionless peat formed. This resulted in less food for large creatures, among them mammoth, rhinos and horses.

As an argument against humans killing all the ice-age giants, Mann pointed out that wild horses, bison and mammoths disappeared from the Alaska landscape when there were few or no people around.

But Mann does not give people a pass. As soon as humans invented agriculture, we started altering the carbon balance of the atmosphere. We have not stopped.

“Humans are preventing the current ice age,” he said. “We should be growing ice sheets again.”

Warming the planet at a time it should perhaps be cooling, humans may have snuffed out a few species that were “hiding out and waiting for it to get cold,” Mann said.

“It is possible that without the anthropogenic delaying of the next ice age, perhaps the woolly mammoths surviving on Wrangel Island until (4,000 years ago) would have had time to repopulate the boreal region,” Mann and his coauthors wrote in their 2019 Biological Reviews paper. 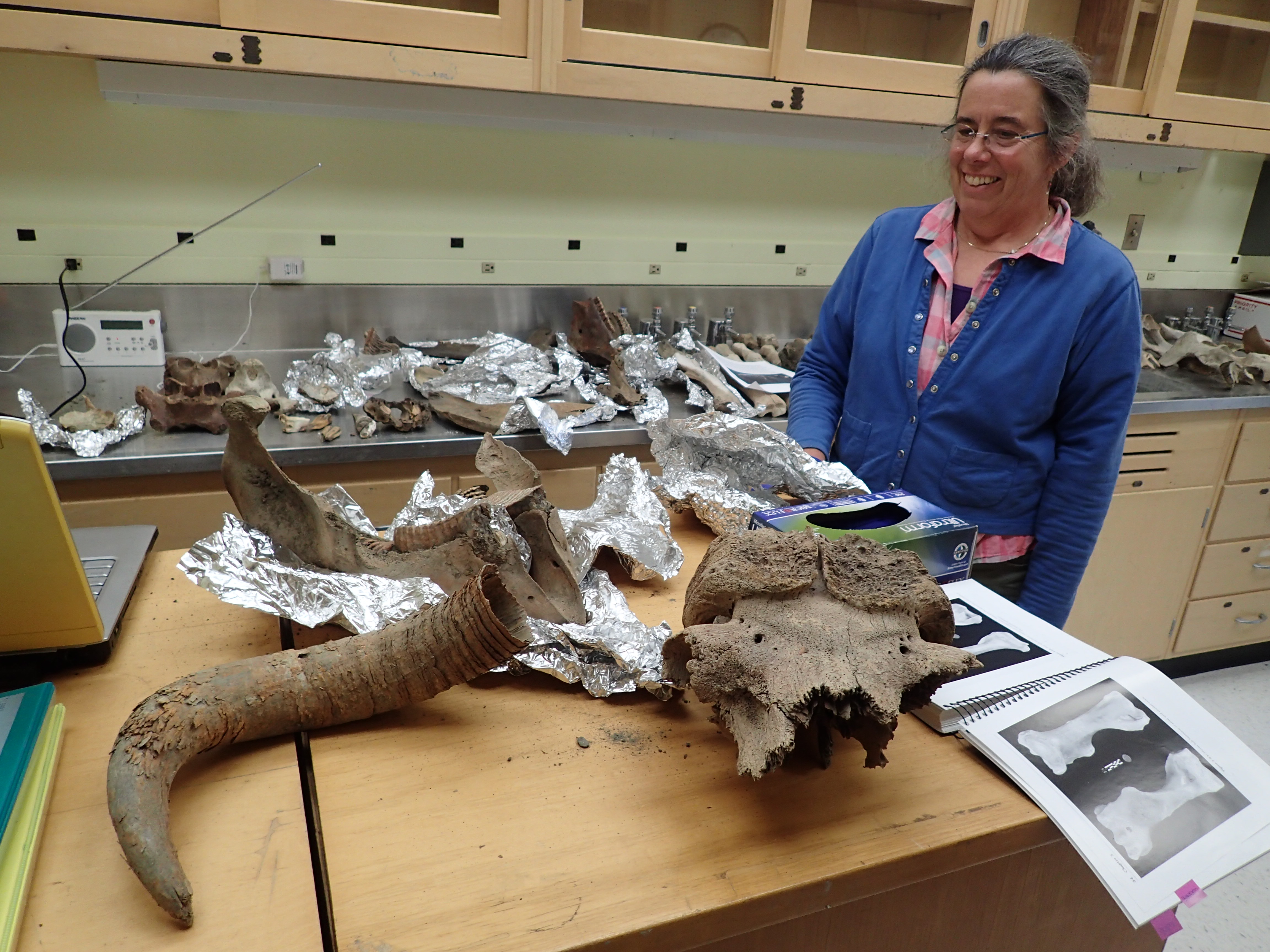 Pam Groves of the University of Alaska Fairbanks looks at bones of ancient creatures she has gathered over the years from northern rivers. The remains here include musk oxen, steppe bison and mammoth. Photo by Ned Rozell.