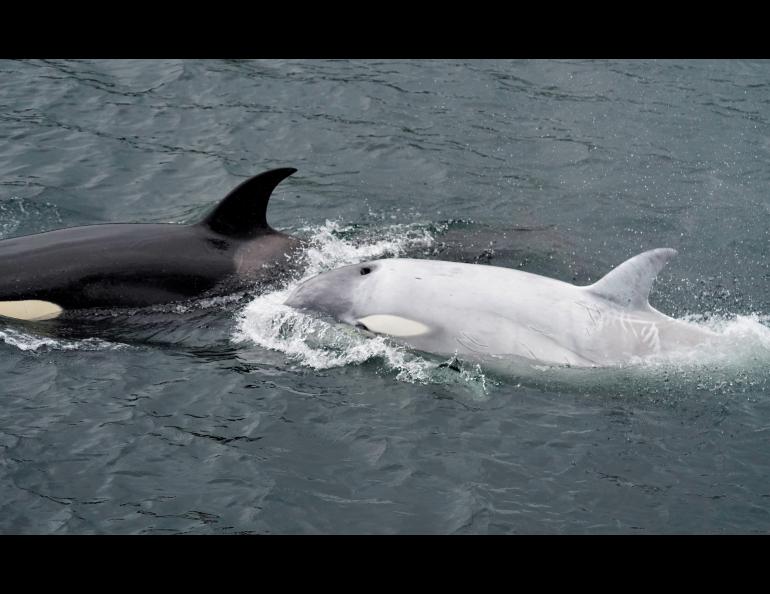 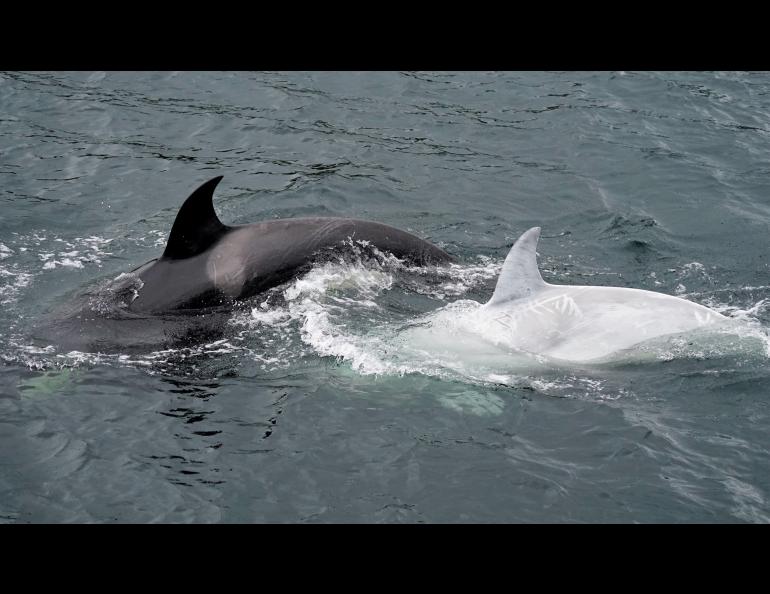 People in an 80-foot charter boat out of Petersburg recently saw what a biologist described as a “less-than-once-in-a-lifetime” event: a white killer whale swimming through the sea.

UAF graduate student Stephanie Hayes was on the Northern Song, operated by Captain Dennis Rogers, on August 7, 2020, just offshore of the village of Kake. Hayes, working as first mate on the boat this summer, and others notice a pod of killer whales about one-quarter mile off.

As they took a closer look, they noticed that one of the orcas was somehow glowing.

“There was a collective gasp from everybody on the bow,” Hayes said.

They continued to watch the white orca swim with its pod — a family group including three or four others, their color a typical dairy-cow black-and-white. Having studied killer whales during her undergraduate work in British Columbia, Hayes knew they were witnessing something special.

“There have only been about eight white killer whales ever recorded in the world,” she said by phone from Petersburg. “To have one in Southeast was an incredible phenomenon.”

Captain Dennis Rogers, who often hosts researchers on his vessel, including those who study killer whales, said it was the first white killer whale he has seen in 45-plus years of sailing on Southeast waters.

Because he lives with a view of the ocean in Petersburg, Rogers was able to get a second view of the white killer whale a few days later. He looked out a window and saw a pod of killer whales. He lifted his binoculars and saw the white orca among them.

He called Hayes, who drove over in her pickup and spotted them, surfacing for air, from the shore. She hopped out of her truck and saw the white orca within the pod, about 100 meters offshore. She took photos, as she had from the boat.

Hayes, who studies squid in her graduate work at UAF, said the white killer whale has a condition called leucism, which she defined as a “lack of vibrancy” in its pigmentation. Caused by a mutation in the whale’s DNA, leucism is different from albinism, in which a creature is all white, with pink eyes.

With a little research, Hayes and Rogers found that their white whale had been documented by British Columbia researchers.

Tl’uk — a word for moon in the language of the Salish peoples of the Pacific Northwest — is a two-year old male killer whale who has not yet left its family group. When it soon does (after other group members kick it out, as a mother moose rejects a full-grown calf), its glow might be a disadvantage, perhaps alerting seals of its approach.

“A new pod might not accept it after it reaches sexual maturity,” Hayes said.

Though scientists are not sure what causes leucism, Hayes said some have speculated that inbreeding can cause higher rates of the mutation.

As for Tl’uk, Hayes said the orca probably hunted seals in LeConte Fjord near Petersburg after she last saw it. Now, it may be long-gone. The white orca belongs to a family group with an incredible range — people have seen this pod as far south as Oregon and as far north as Haines.

Hayes feels lucky that COVID-19 interrupted her squid fieldwork this summer, allowing her to work out of Petersburg. 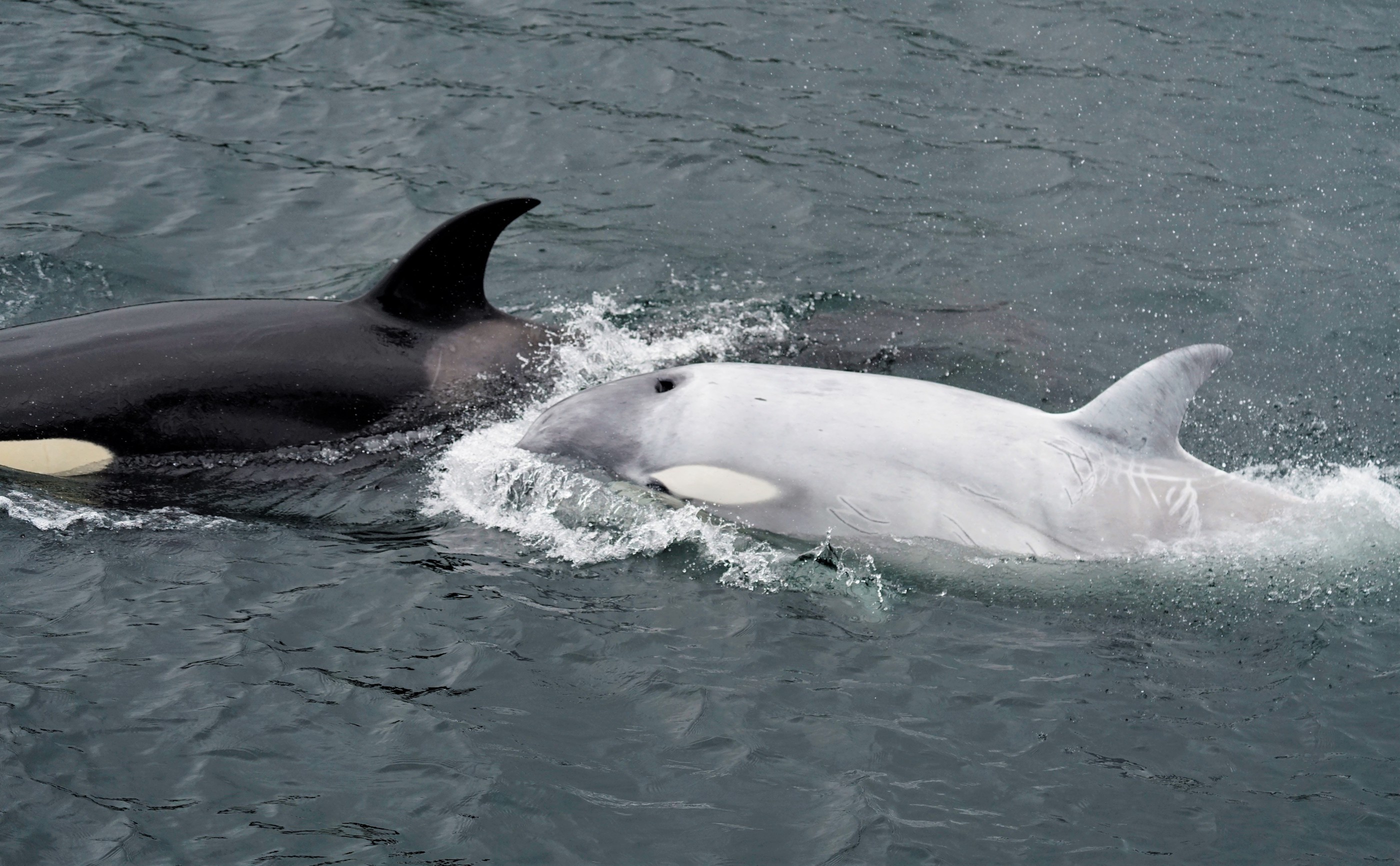 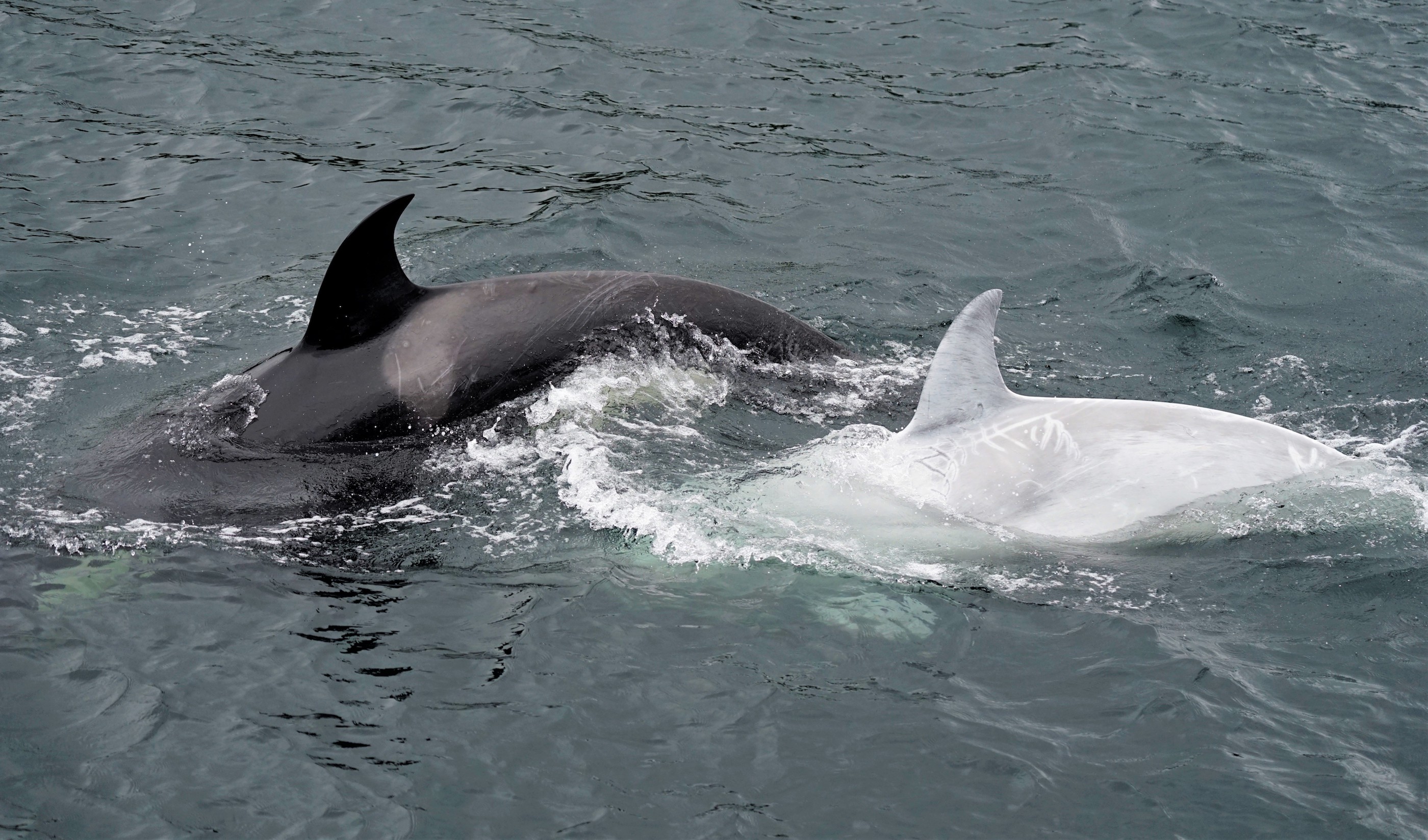