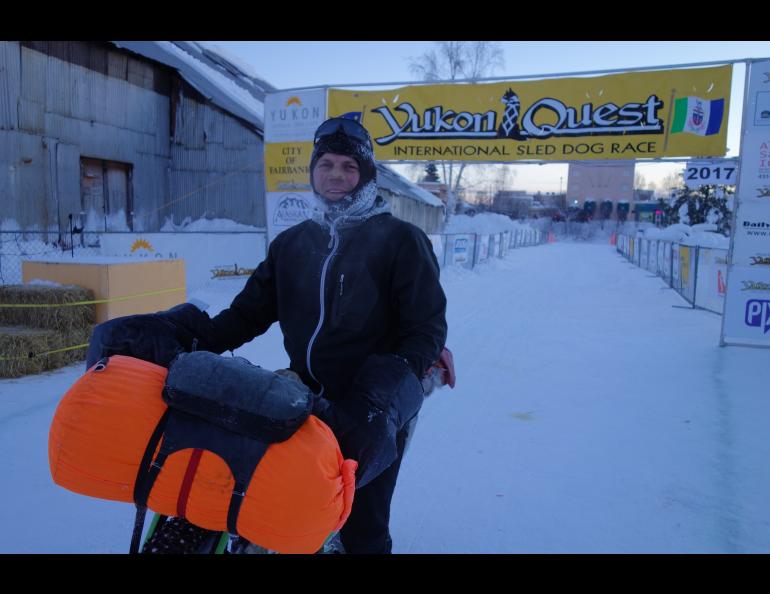 Jeff Oatley arrives in Fairbanks from Skagway on Feb. 16, 2017. He was halfway to Nome on a 1,818-mile bike ride on snowmachine trails. Photo by Ned Rozell.

On a sunny afternoon in Nome, Jeff Oatley stepped off his fat bike. That day, for the first time since before the Super Bowl, he had nowhere to ride tomorrow.

On March 7, Oatley, with his wife Heather Best (who rode a few hundred miles of choice trail with him), finished a winter bicycle ride from Skagway to Nome.

Despite snowstorms that stalled him on the middle Yukon River for a few days, Oatley averaged 50 miles each day for more than a month. That's like biking on a snowmachine trail from Denver to New York, except with more spruce trees and wolves.

Advances in high-flotation winter bicycles with tires thick as loaves of bread have enabled some impressive feats. On March 26, six fat bikers sped over a hilly 100-mile trail in 10 hours in the White Mountains north of Fairbanks.

But the 47-year-old Fairbanks civil engineer's recent journey stands alone. Not only did he ride the frigid Yukon Quest trail this winter, Oatley also rode most of this year's Iditarod trail in the same trip.

How did he overcome the many elements that would stop most of us? Fatigue, extreme cold, pedaling up your driveway in the middle of the trip?

Oatley checks just about all the physiological and psychological boxes such a feat requires. A narrowed version of the 5-foot-9 cyclist recently answered some questions about his ride.

He weighs about 185 pounds now, down from his usual 192. When he stepped on a scale in the village of Kaltag a few weeks ago, he was 20 pounds lighter than when he started.

Some winter adventurers, like Oatley's late friend and mentor Rocky Reifenstuhl, have trouble eating on the trail. Oatley never does. He carried about three pounds of food for each day, which made his bike weigh 80 pounds at times.

When it was 40 below, he could not satisfy his hunger. He woke a few times to eat the crackers and summer sausage and Nutter Butter cookies tucked inside his sleeping bag.

"You've got to be able to eat like a horse, but eat what a goat would," he said.

Oatley felt the knife edge of minus 50 Fahrenheit a few times. He frostbit his face and fingertips, the latter when he grabbed his titanium pot on the frozen Fortymile River.

Oatley has good gear and knows when to shed and add layers. He rode much of the route with an upper base layer on his torso, covered by a fleece sweater and a riding shell. He rarely wore long underwear under his biking pants.

"I'm a lot more of a heater than other people," he said. "When I'm riding with someone, usually everyone has one more layer than me.

Oatley is also a great sleeper, saying getting decent rest every night allowed him to recover for the next day's effort.

"Years ago, the Rock (Reifenstuhl) taught me how to lay the bike on the ground, curl up on it, and sleep for 10 minutes. After you do that the gym floor will feel like a big warm bed."

Physiologists still don't know what function sleep has for humans and other animals, but it matters.

"When you get in a few hours more sleep, the degree of difficulty goes way down," he said. "I was talking to mushers in Dawson who had gotten 45 minutes of sleep in the last few days and I don't know how they did it."

Like mushers and mountain climbers, Oatley seems to have a great tolerance for discomfort. On the day he rode into Dawson City in the Yukon, he managed 98 wilderness miles on his bike. It took 17 hours and he dropped into valleys thick with 45-below air. Rather than camping in his bag and bivouac sack, he kept pedaling.

"You've got to be flexible," he said of altering his plan to camp halfway to Dawson City. Twenty years of similar experiences help.

"I've just done a lot of big hard days," said Oatley, who once pedaled across America on a road bike in 10 days. "It doesn't seem that abnormal."

That leads to perhaps the most important asset for someone riding a bike across Alaska during a cold winter: The mind.

Twenty years ago, scientists found that Alaskans participating in a long-distance winter race were intelligent, stubborn, imaginative, tolerant and self-sufficient. That seems to describe Oatley.

He does not panic at a drop in temperature or a coastal wind. And he does not expect a clean run. He said he wouldn't trade the bad days, like the ones he pushed his bike toward Ruby while wearing borrowed snowshoes.

He could have bailed on the trip with a commercial flight from a village. He could have rolled the bike into his shed at the halfway point. But the thrill of seeing new country and meeting people outweighed the pains and setbacks.

"You're out there because it's fun," he said. "You don't really want to stop. It never crossed my mind.

"Some people think it's like torture or masochism. I don't think I'd be doing it if it wasn't fun."

He realizes his journeys are not everyone's idea of recreation. Some villagers thought he was crazy for riding such a slow device compared to a snowmachine. But he said the mushers and trappers he met on the trail always understood.

"You've got to have a little Forrest Gump in you," he said. 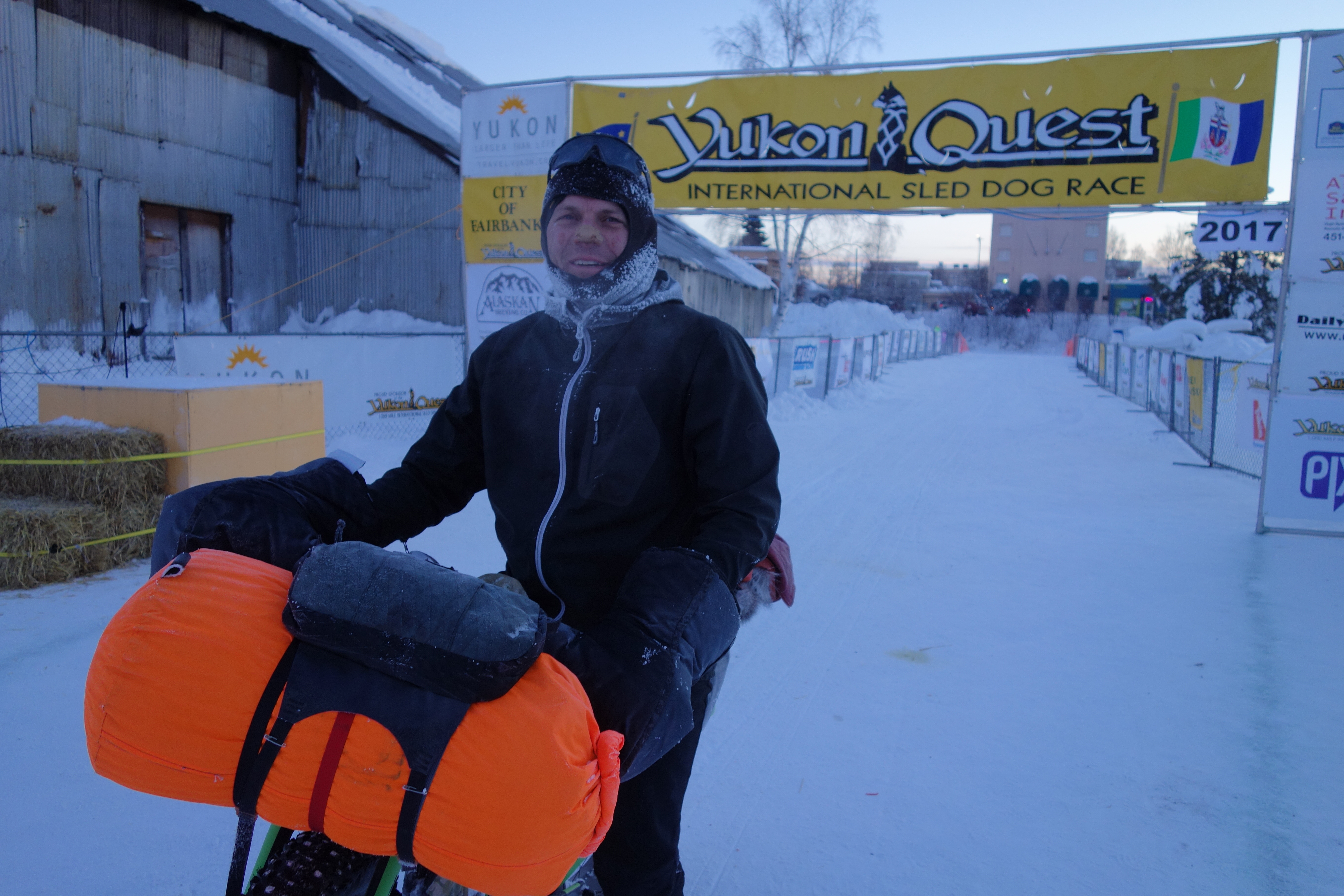 Jeff Oatley arrives in Fairbanks from Skagway on Feb. 16, 2017. He was halfway to Nome on a 1,818-mile bike ride on snowmachine trails. Photo by Ned Rozell.