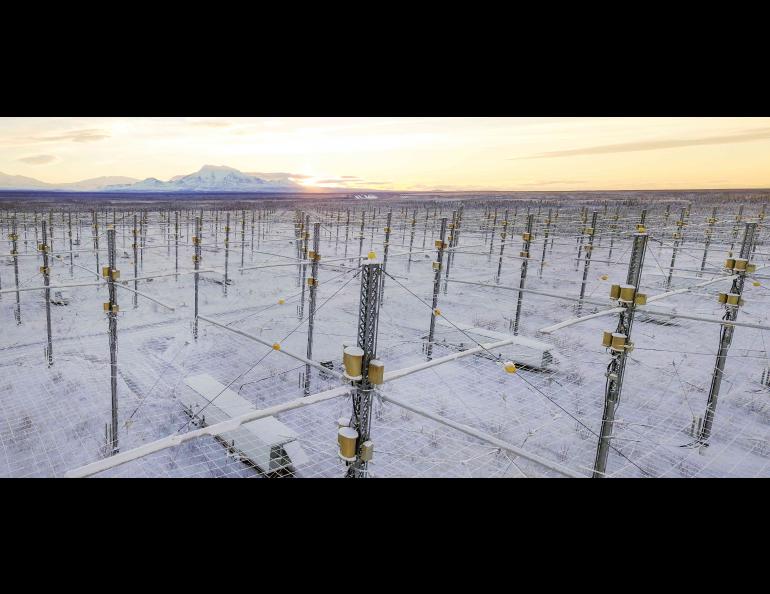 The High-frequency Active Auroral Research Program near Gakona, Alaska, includes a phased array of 180 high-frequency crossed-dipole antennas spread across 33 acres and capable of radiating 3.6 megawatts into the upper atmosphere and ionosphere. Photo courtesy of HAARP

The High-frequency Active Auroral Research Program near Gakona, Alaska, includes a phased array of 180 high-frequency crossed-dipole antennas spread across 33 acres and capable of radiating 3.6 megawatts into the upper atmosphere and ionosphere. Photo courtesy of HAARP

HAARP to begin largest set of experiments at its new observatory

Bouncing a signal off the moon.

Sending a beam to Jupiter.

Those are just some of the 13 experiments for a packed 10 days of science beginning Wednesday at the High-frequency Active Auroral Research Program. The University of Alaska Fairbanks operates the facility located near Gakona.

The number of experiments is the highest so far under a five-year, $9.3 million grant awarded last year by the National Science Foundation to establish the Subauroral Geophysical Observatory at HAARP. The observatory’s purpose is the exploration of Earth’s upper atmosphere and geospace environment.

“The October research campaign is our largest and most diverse to date, with researchers and citizen scientists collaborating from across the globe,” said Jessica Matthews, HAARP’s program manager.

Among the experiments is the Moon Bounce, a joint operation of the JPL, Owens Valley Radio Observatory in California and the University of New Mexico Long Wavelength Array.

The purpose is to test the coordination of the three facilities for the eventual study of near-Earth asteroids, especially those that can be a hazard to Earth. Knowing an asteroid’s composition can influence the type of defense to be used.

The experiment consists of transmitting a signal from HAARP to the moon and receiving the reflected signal at the California and New Mexico sites.

University of California, Berkeley, scientists will try to learn what causes the unusual polar light known as a strong thermal emission velocity enhancement, or STEVE. This light, which is mostly a white or mauve color, appears at lower latitudes than the aurora. Most scientists studying the aurora believe a STEVE occurs from a mechanism different from what creates the aurora.

Scientists have little information about the ionospheres of planets other than Earth but believe them to be rich with information. On Earth, the ionosphere is a place within the upper atmosphere, extending to the interface with space, that is filled with particles that become electrically charged from interaction with the sun’s energy.

The experiment will send a beam to Jupiter and bounce it off the giant planet’s ionosphere with the hope that it will be received at the New Mexico site.

Jupiter is currently about 374 million miles from Earth.

The experiment will stretch the transmitting ability of HAARP, which can produce up to 3.6 megawatts of power, to the fullest. It will also test the receiving ability of the New Mexico site, which consists of 512 antennas.

The Air Force originally developed and owned HAARP but transferred the research instruments to UAF in August 2015. UAF operates the site under an agreement with the Air Force.

Poker Flat Research Range, located at Mile 30 Steese Highway, will be involved in three of the experiments. The UAF Geophysical Institute owns Poker Flat and operates it under a contract with NASA’s Wallops Flight Facility, which is part of the Goddard Space Flight Center.

Pilots flying in the Gulkana area are asked to check with the Federal Aviation Administration for temporary flight restriction details.