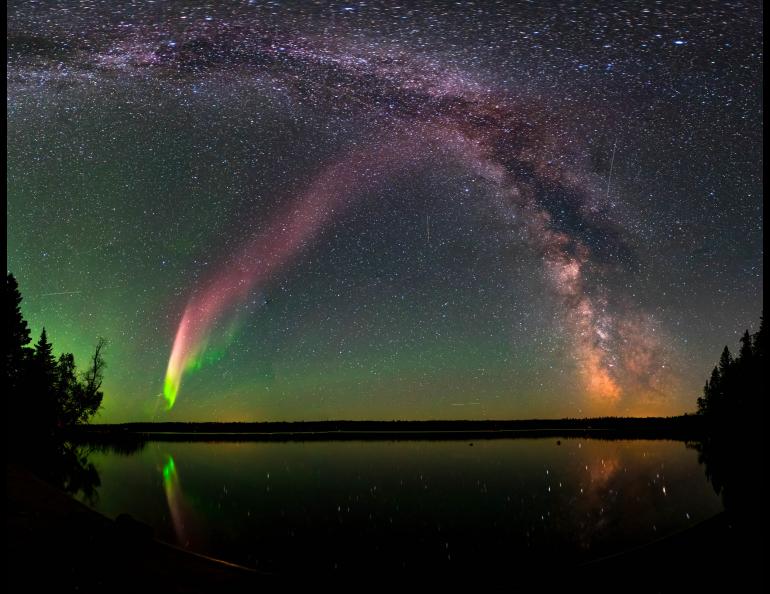 The Strong Thermal Emission Velocity Enhancement, visible as a pink band rising from the lower left to upper right of this photograph, appears with the Milky Way over Childs Lake, Manitoba, Canada. Image courtesy of Krista Trinder and NASA 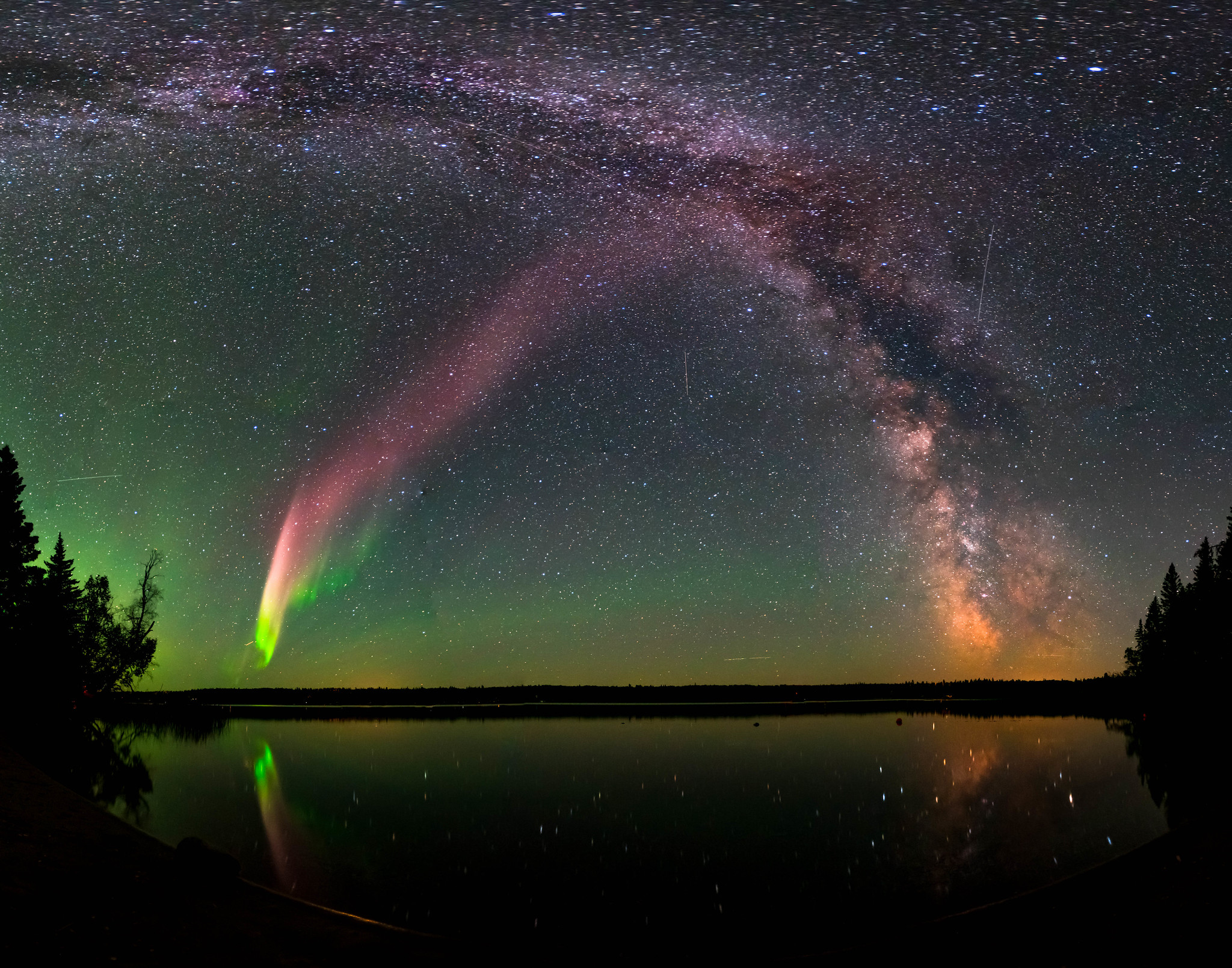 The Strong Thermal Emission Velocity Enhancement, visible as a pink band rising from the lower left to upper right of this photograph, appears with the Milky Way over Childs Lake, Manitoba, Canada. Image courtesy of Krista Trinder and NASA

Aurora-watchers gazing at spectacular displays over the Labor Day weekend may have been seeing more than the northern lights. They may have been dazzled by STEVE as well.

STEVE is short for the Strong Thermal Emissions Velocity Enhancement, a celestial phenomenon auroral researchers, citizen-scientists and photography enthusiasts first introduced to the world in 2016.

STEVE’s narrow ribbon of light, to the naked eye, looks strikingly similar to aurora. However, there are distinct differences. First, its pinkish mauve color is not aurora-like. In addition, the phenomenon is often associated with “picket fence” emissions, which look like green columns of light passing through the ribbons at lower altitudes. Lastly, STEVE appears in areas farther south than auroral lights typically do.

Scientists thought something didn’t add up.

This summer, researchers confirmed that STEVE is not aurora, but is instead a unique phenomenon. Their findings were published in the journal Geophysical Research Letters.

“The big thing is, we can clearly say now it’s not regular aurora,” said University of Alaska Fairbanks researcher Don Hampton, a co-author on the paper. “It’s a new phenomenon, that’s pretty exciting.”

The project, led by University of Calgary researcher D.M. Gillies, used a spectrograph to examine the light from the phenomenon and identify what kind of emissions it gives and in what patterns and wavelengths. Hampton and his colleagues designed and built the spectrograph at the UAF Geophysical Institute.

“We need to understand what the spectrum looks like and therefore understand the physics behind it,” Hampton said. A spectrum acts as a definitive identification, like a DNA test or chemical formula for light.

When the scientists looked at STEVE’s spectrum they saw something unique. Aurora has individual wavelengths and acts like a neon sign. In aurora, electrons from our magnetosphere fly down, bumping into atoms and molecules in our atmosphere, which excites them. Once the excited particles relax they emit photons, which can be seen as specific wavelengths of light. Depending on which colors you see, you know certain lights came from a nitrogen molecule and others came from oxygen.

“When we looked at the spectrum of STEVE, it had none of those distinct wavelengths,” Hampton said. “Instead, it’s a very broad band of light. So all wavelengths are basically equally as strong.”

This means that the light is not coming from atoms and molecules colliding in the atmosphere but from something very warm — maybe thousands of degrees warm.

“When you turn your electric stove on, those coils get red hot, right? If you look at it with a spectrograph, you would see broadband emissions,” Hampton said. “So this is like very, very warm atmosphere emissions of some sort.”

The research also concluded that the picket fence emissions are similar to a typical aurora structure. These are caused by the same kinds of particle precipitation usually seen with aurora.

Scientists have studied the hot particles associated with STEVE since the 1970s. However, they did not realize until recently that they produced a visible feature.

Confirming the existence of a celestial phenomenon is exciting, Hampton said. The next, and more difficult step, is finding out what causes it and how it affects us.

Any disturbance to our upper atmosphere, like aurora, can affect radio communications between Earth and spacecraft. STEVE is especially interesting because it is a large local energy input, but clearly not normal aurora.

“As a new phenomenon we want to understand not just why and how it is created, but also how does it affect our infrastructure,” Hampton said. “We don’t expect that if we understand how STEVE is created that we will cure cancer, or produce warp drive (though one never knows), but we do want to understand how one bit of the ionosphere works, and that may help overall knowledge as well as provide some practical understanding to reduce the impact on other aspects of our daily life.”

ON THE WEB: For additional explanation of the phenomenon, watch this video from NASA: https://www.youtube.com/watch?v=wRHwGD-is9U