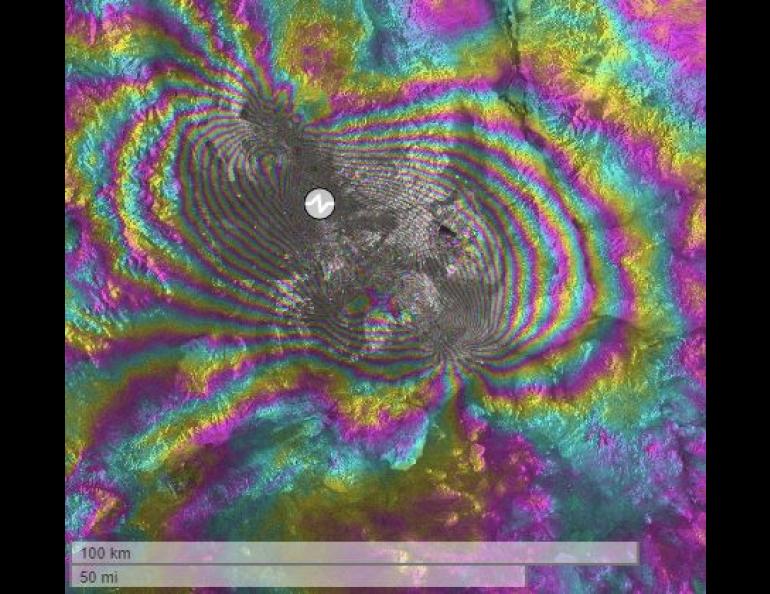 Imagery from the SARVIEWS 2.0 interface shows the M 7.1 Ridgecrest, CA Earthquake from July 2019. SARVIEWS 2.0, is a free automated tool that allows scientists, the public and emergency management professionals to monitor and analyze natural hazards in near real-time. 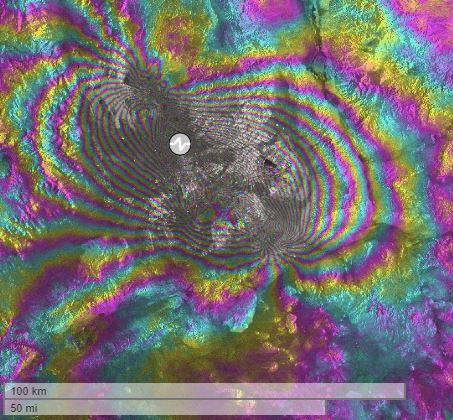 Imagery from the SARVIEWS 2.0 interface shows the M 7.1 Ridgecrest, CA Earthquake from July 2019. SARVIEWS 2.0, is a free automated tool that allows scientists, the public and emergency management professionals to monitor and analyze natural hazards in near real-time.

Volcanoes can pulse and inflate before they erupt. Earthquakes can tear the ground along fault lines like a losing raffle ticket. Satellites can see these landscape events from space, and, now, a new tool will help scientists to better visualize them.

This spring, a team of scientists at the University of Alaska Fairbanks and the Alaska Satellite Facility released SARVIEWS 2.0, a free online service to monitor data from earthquakes and volcanoes.

SARVIEWS and its update, SARVIEWS 2.0, are automated tools that allow scientists, the public and emergency management professionals to monitor and analyze natural hazards in near real time. The tool creates products from images of the European Space Agency’s Sentinel-1 radar remote sensing satellites and makes them available through a dedicated interface. From the time of data collection, it typically takes SARVIEWS only a few hours to make maps or other visualizations available.

The update, released in March, features an online, interactive map.

“The map overlay is exciting, and it makes the analysis of the radar remote sensing products within the platform so much easier,” said Franz Meyer, the lead researcher for the project.

Meyer said the map allows users to search for surface and environmental changes that can be laid over event information, such as the location and strength of an earthquake.

Users can visualize events, using a time-slider function, to monitor situations as they unfold. Currently the platform allows for earthquake and volcano analysis, and preparations are being made to include flood events.

“Even without further processing, this can convey immediate situational awareness that scientists can understand and use,” Meyer said.

The update allows users to explore data from natural hazards without downloading specialized software or large data sets. It also includes filters so users can download specific products rather than an entire set of data.

Meyer hopes more scientists will take advantage of the platform. He expects seismologists and volcanologists will use it in their research. In addition, hazard-monitoring organizations, such as the Alaska Volcano Observatory or the Alaska Earthquake Center, could use SARVIEWS to continuously monitor surface deformation from active volcanoes or earthquakes across the northern Pacific Ocean.

The tool takes advantage of a technology called Synthetic Aperture Radar, or SAR. SAR technology sends out pulses of radio waves that hit the surface of the Earth and reflect back to a recording device. As the instrument on the satellite moves across the Earth, the change in the time it takes for the pulses to return can be used to map the surface of the Earth. These waves cut through cloud cover and do not require sunlight, unlike optical satellite imagery.

SARVIEWS takes advantage of already existing networks of hazard alerts, such as the U.S. Geological Survey Earthquake Notification Service and Volcano Notification System. Once these programs detect an event, they send notifications with the location and details of the event to subscribed users, including SARVIEWS. Once notified, an automated process identifies and retrieves SAR data from just before the event and keeps monitoring an event until a few months after.