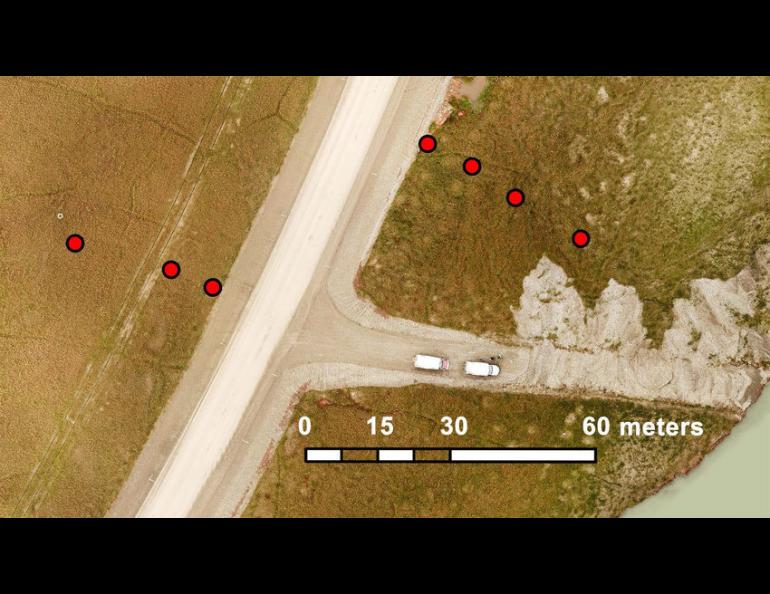 This illustration from the article shows the location of temperature sensors at the Dalton Highway research site. Drone photo by Soraya Kaiser; illustration distributed under Creative Commons 4.0 International 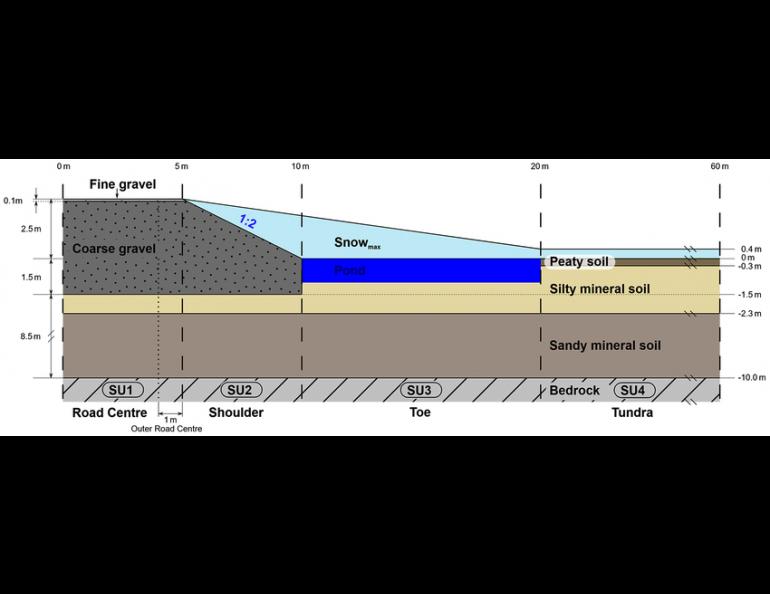 This diagram models half a road in cross-section from the road center to the adjacent tundra. The graphic illustrates the subdivision into four structural units (road center, shoulder, toe and tundra). The grayish area with black dots represents the road embankment. The light blue shading indicates 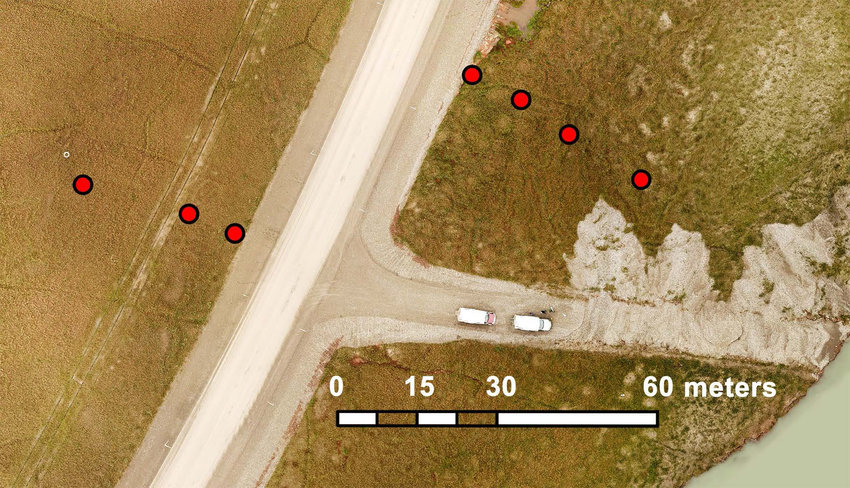 This illustration from the article shows the location of temperature sensors at the Dalton Highway research site. Drone photo by Soraya Kaiser; illustration distributed under Creative Commons 4.0 International

This diagram models half a road in cross-section from the road center to the adjacent tundra. The graphic illustrates the subdivision into four structural units (road center, shoulder, toe and tundra). The grayish area with black dots represents the road embankment. The light blue shading indicates

Roads, bridges, pipelines and other types of infrastructure in Alaska and elsewhere in the Arctic will deteriorate faster than expected due to a failure by planners to account for the structures’ impact on adjacent permafrost, according to research by a University of Alaska Fairbanks Geophysical Institute permafrost expert and others.

The researchers say planners must account for the sideward repercussions of their projects in addition to the usual projection of the direct top-down effects.

The finding was presented in a May 31 paper in The Cryosphere, a publication of the European Geosciences Union.

UAF Geophysical Institute geophysics Professor Emeritus Vladimir Romanovsky is among the 13 authors of the paper along with biology professor Donald A. Walker of the UAF Institute of Arctic Biology and research assistant professor Erin Trochim of the Alaska Center for Energy and Power, also at UAF. Principal researcher for the project is Thomas Schneider von Deimling of the Alfred Wegener Institute Helmholtz Centre for Polar and Marine Research in Potsdam, Germany.

The research focused on a portion of the Dalton Highway on Alaska’s North Slope about 10 miles south of the Prudhoe Bay oil fields. Sensors monitored the temperature at seven locations, three to the west of the highway and four on the east.

The researchers found that top-down thawing isn’t confined to the area beneath the road surface. They found instead that thawing spreads outward, leading to destabilization of the embankment and ground underneath it. The thawing creates taliks — areas of subsurface ground that remain unfrozen year-round — under a roadway’s toe, the prepared zone at the base of the embankment and abutting the natural terrain.

The result, the authors write, is an accelerating thaw rate and earlier than anticipated road failure — and a warning that other types of Arctic infrastructure such as pipelines, fuel storage tanks and airports will fail sooner than projected.

Permafrost ground sinks when it thaws because much of its bulk comes from ice either mixed in the soil or frozen in pure deposits. The fieldwork and subsequent computer modeling of a gravel road built on continuous permafrost found that a gradual thaw will lead to an accelerated “and likely irreversible permafrost degradation” and that “road failure is inevitable once a critical level of ground warming has been reached” absent extensive ground-cooling measures, the authors write.

The authors write that their findings show a shortcoming in other infrastructure risk assessment methods, which fail to adequately capture changes in permafrost and don’t analyze the interaction between the infrastructure and the adjacent ground.

Those shortcomings make current estimates of infrastructure failure dates inaccurate.
“You cannot make blank decisions when you’re dealing with permafrost,” said Romanovsky, a longtime permafrost researcher. “You always have to be more specific about the region, about the amount of ice in permafrost and about the infrastructure itself. And when you take all of this into consideration — and climate change — you can make a much more educated decision.”

The research will prove more beneficial in the planning of new roads than in the maintenance of existing roads, for which little can be done to change their initial construction. The research will, however, give transportation managers a better idea of when existing roads are likely to fail, Romanovsky said.

“The Department of Transportation can, using these results, understand how much they have to plan to spend to keep roads in good condition,” he said. “They have a good idea in the near term, but they don’t know what to expect, say, 10 years from now when the permafrost will be even more vulnerable than it is right now and how this thawing process will continue.”

The authors conclude by saying it is “crucial to consider climate change effects when planning and constructing infrastructure on permafrost as a transition from a stable to a highly unstable state can well occur within the infrastructure’s service lifetime (about 30 years).”

They add that their focus on the Dalton Highway illustrates that “such a transition can even occur in the coming decade for infrastructure built on continuous permafrost that displays cold and relatively stable conditions today.”