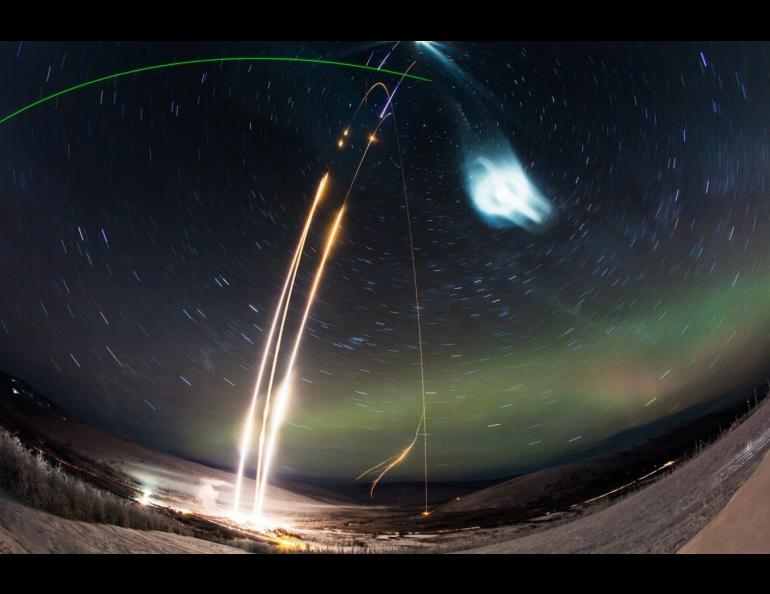 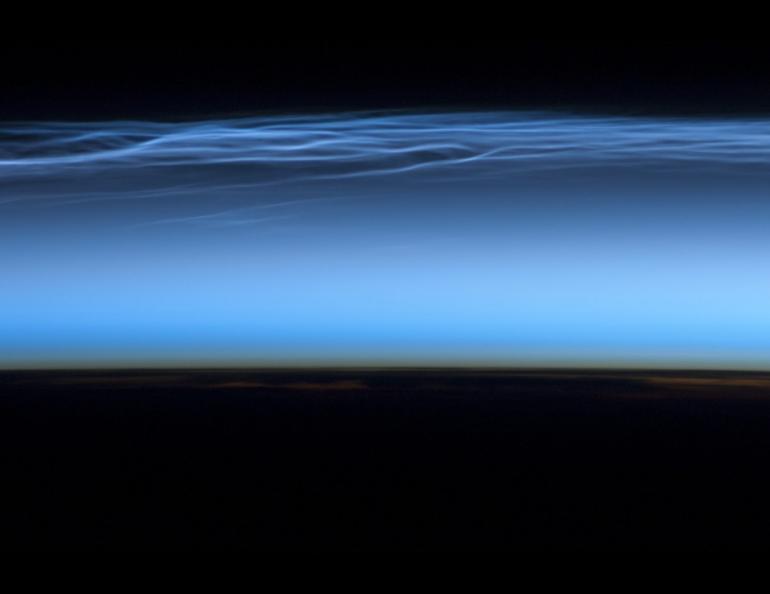 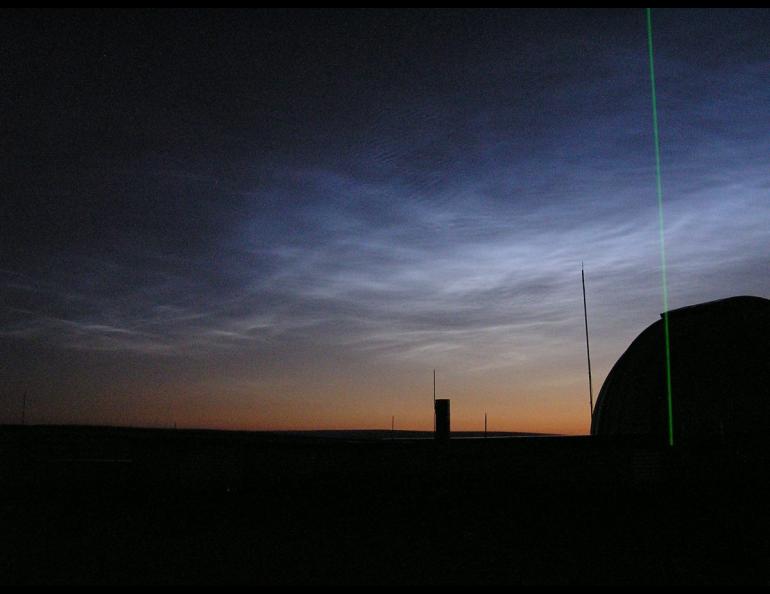 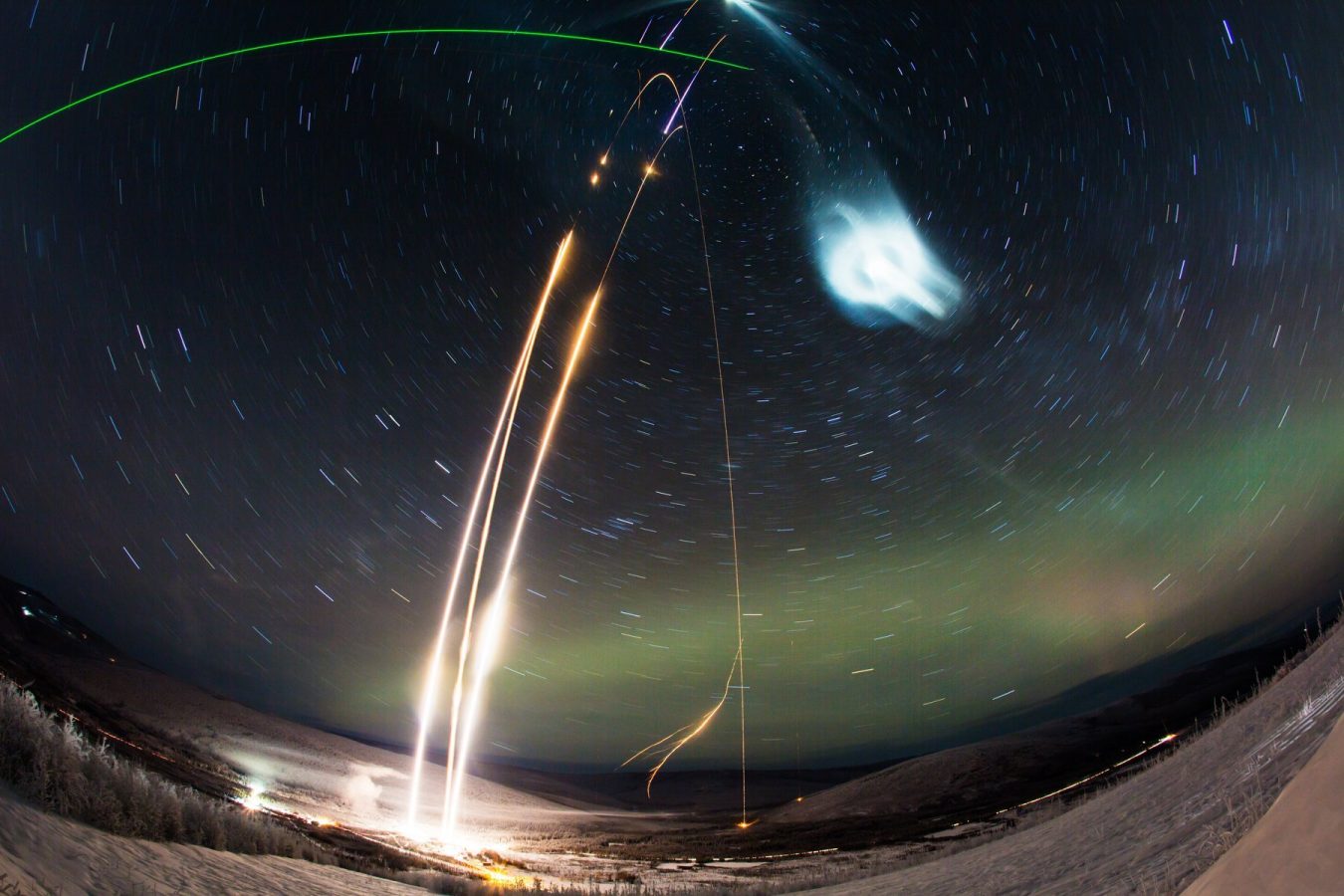 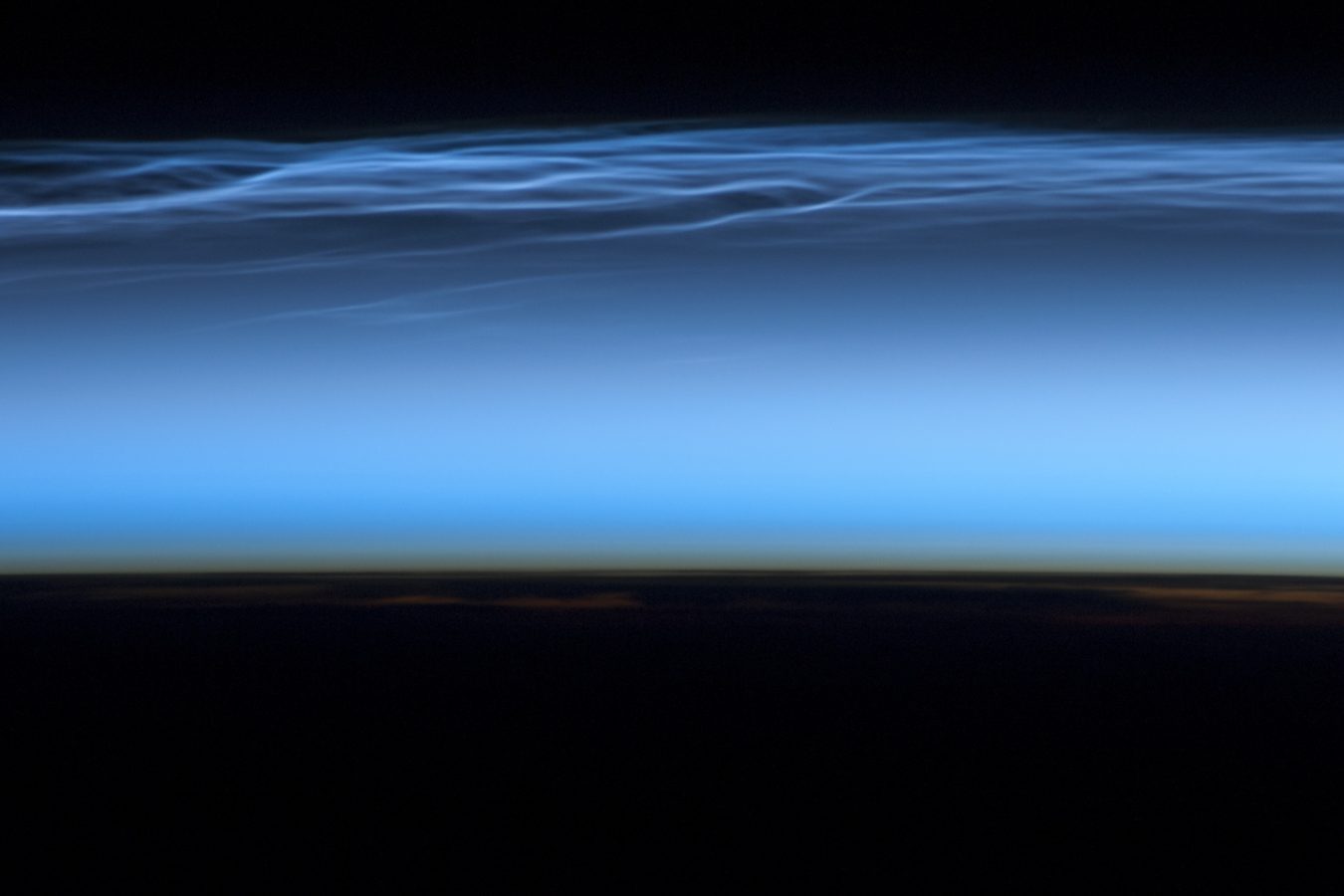 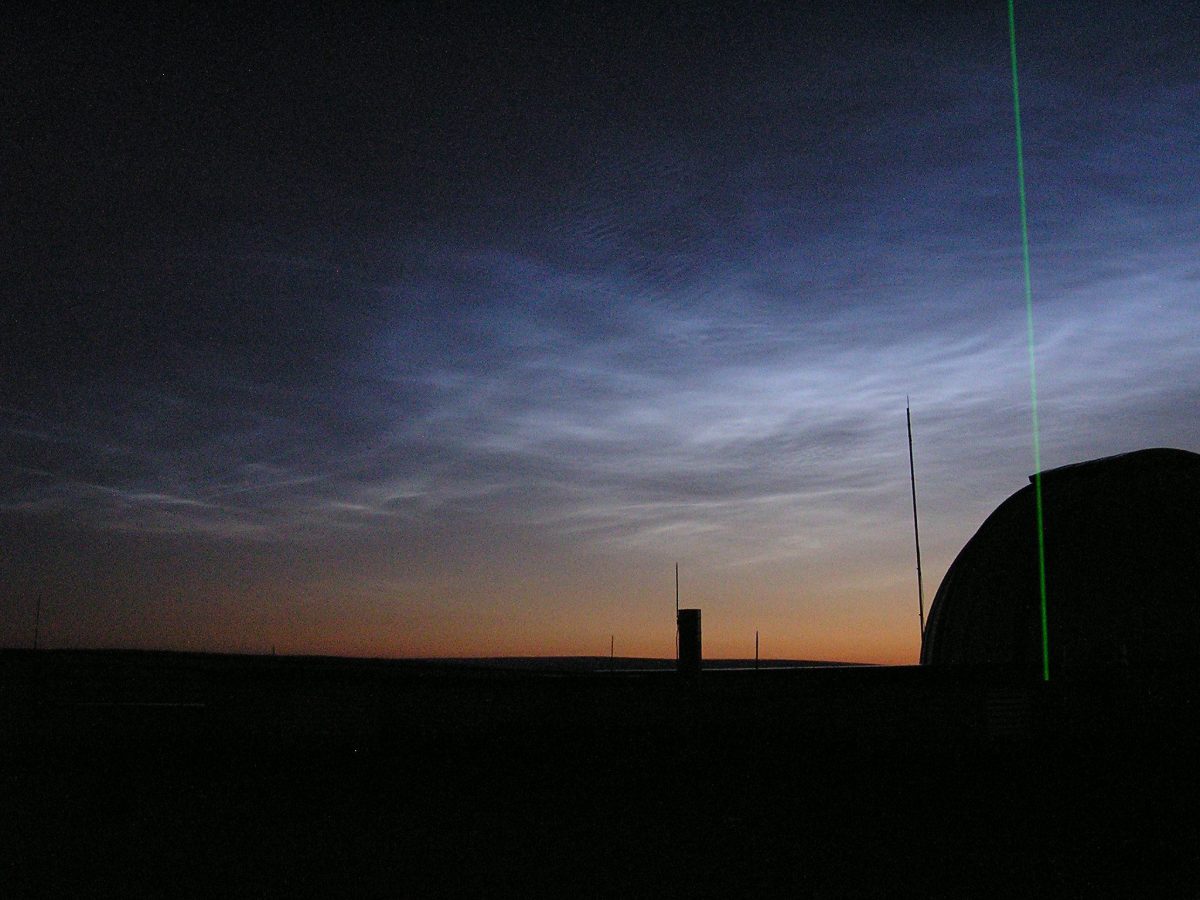 Results of a 2018 multirocket launch at Poker Flat Research Range north of Fairbanks will help scientists better understand the impact of more water vapor accumulating near the fringe of the Earth’s atmosphere.

“This is the first time anyone has experimentally demonstrated that cloud formation in the mesosphere is directly linked to cooling by water vapor itself,” said Irfan Azeem, space physicist at Astra LLC in Louisville, Colorado, and principal investigator of the Super Soaker mission.

The NASA-funded project, named Super Soaker, involved launching a canister containing about 50 gallons of water skyward to create an artificial polar mesospheric cloud on the night of Jan. 25-26, 2018. A ground-based laser radar (lidar) detected the cloud that formed 18 seconds after the water release 50 miles overhead.

A time-lapse photograph captures the Super Soaker launches on Jan. 25-26, 2018. Three rockets launched with the mission, two using vapor tracers to track wind movement and one releasing a water canister to seed a polar mesospheric cloud. The green laser beam visible at the top left is the LIDAR beam used to measure the artificial cloud.

Findings of the Super Soaker experiment were published this month in the Journal of Geophysical Research in a paper authored by Richard Collins, director of the University of Alaska Fairbanks Graduate School and a professor of atmospheric sciences at the Geophysical Institute, with Azeem and a team of scientists from across the United States. Geophysical Institute graduate students Jintai Li and Jennifer Alspach, who developed lidar systems for the project and participated in the experiment, were among the paper’s 10 co-authors. Undergraduate student Mikayla Grunin worked with Li to develop one of the lidar systems.

The Super Soaker experiment showed that water vapor contributes to cloud formation in the upper atmosphere in two ways: by making the air more humid and by cooling the air. This moisture-driven cooling is distinct from the “greenhouse effect” warming that water vapor causes in the lowest level of the atmosphere — the troposphere.

Increased water vapor comes from methane, which is being produced by humans in rising quantities. Methane rises into the mesosphere, where it oxidizes in sunlight to form water vapor and carbon dioxide.

Space traffic also adds to the amount of water vapor collecting in this region of the atmosphere, as water vapor is common in rocket engine exhaust, the paper notes. Increases in space traffic will result in more water being deposited in the upper atmosphere.

What are the implications of this cooling of the upper atmosphere?

“We expect that a more humid atmosphere should be cloudier, just as we see fog form over ponds on cold mornings. What we found that is new is that the water vapor appears to actively cool the atmosphere to promote cloud formation,” Collins said.

“We don’t believe it’s going to cause a radical effect at the ground, but it helps us understand long-term climate trends in the atmosphere and the role of water vapor in the climate system,” he said. “And it also allows us to understand better our weather and climate models, where a lot of times cloud formation is the acid test of whether all the parts of your weather and climate model are working.”

Polar mesospheric clouds exist at the edge of space at an altitude of 47 to 53 miles. Water vapor at these altitudes freezes into ice crystals, forming the clouds. These clouds can be seen as they glow brightly after sunset when they are lit from below by sunlight against a dark sky. Polar mesospheric clouds are also called night-glowing or noctilucent clouds.

The clouds appear naturally in the Arctic or Antarctic during summer. Researchers chose to create the artificial cloud in the winter to have a controlled setting.

These clouds have long been used as indicators of climate change. First reported in the late 1800s, the clouds have been seen more often in the 20th and 21st centuries.

The first two rockets dispersed trimethyl aluminum, which, when it reacts with oxygen, produces the harmless products of aluminum oxide, carbon dioxide and water vapor, as well as a bluish white glow. By tracking this glow, researchers can determine the winds over a wide range of altitudes, letting them see the weather conditions into which the water was released.

The third rocket, launched 90 seconds after the second rocket, carried the water canister. The canister was detonated at an altitude of 53 miles to create a small polar mesospheric cloud that was detectable only by the lidar.

Researchers are eager to conduct a second Super Soaker, one that will eject much more water.

“What we saw was very, very fine, and we’d like to get more water up there to get a thicker cloud and see if we can directly measure the cooling effect rather than inferring it from the fact that the cloud formed,” Collins said, referring to data acquired from the ground-based lidar.

Other co-authors of the paper represented the Space Science Division at the Naval Research Laboratory in Washington, D.C.; Astra LLC of Boulder, Colorado; the Department of Physics, Center for Atmospheric and Space Sciences at Utah State University; the Department of Physics at Clemson University; GATS Inc. of Boulder, Colorado; and the Applied Physics Laboratory at Johns Hopkins University.

Poker Flat Research Range is owned by the UAF Geophysical Institute and is operated under a contract with NASA’s Wallops Flight Facility, which is part of the Goddard Space Flight Center.