Source for graphic: NASA/Jet Propulsion Laboratory-Caltech. Artist's rendition of our solar system. Not to scale.

Welcome to the UAF Planet Walk!

Take an out-of-this-world stroll along the UAF Planet Walk! This 1:4.4 billion scale model of the solar system will take you on a little less than one mile walk through our solar system.

The Planet Walk begins at the west end of Yukon Drive, near the intersection with Koyukuk Drive. As you move east along Yukon Drive, nine signs represent the sun, Mercury, Venus, Earth, Mars, Jupiter, Saturn, Uranus and Neptune. A 10th sign highlights Pluto, which was reclassified as a dwarf planet in 2006. Each station presents an image of the planet and information about it.

The location of each sign is scaled to approximate the featured planet’s distance from the sun. The size comparison on the signs is 10 times larger than the distance scale in order to make Pluto visible on its sign; if the sun was scaled to the size of a basketball then a visitor would have to walk almost 10 miles to see the whole installation!

Along the way, you might discover that the sunny side of Mercury is hotter than a pizza oven, or that there are clouds of sulfuric acid on Venus, or that the diameter of Pluto is roughly equivalent to the longest length of Alaska from top to bottom. Planning to land on Jupiter? Forget it – this planet is hot and gaseous, and has no solid surface.

UAF Geophysical Institute faculty and students have contributed to space missions exploring the solar system, including NASA’s New Horizons mission to Pluto and the Kuiper Belt. Students have many opportunities to participate in cutting-edge research at UAF, a Land, Sea and Space Grant university.

The UAF Planet Walk was developed by members of the Alaska chapter of the Society of Physics Students, a club associated with the College of Natural Science and Mathematics. A student artist from the College of Liberal Arts produced the design concept. The Planet Walk was sponsored by the Geophysical Institute.

Select from the planets below to learn more about them, or explore further online at https://solarsystem.nasa.gov/planets/overview/.

Before heading out on the Planet Walk path, download a 10-question scavenger hunt and learn interesting facts about our solar system. 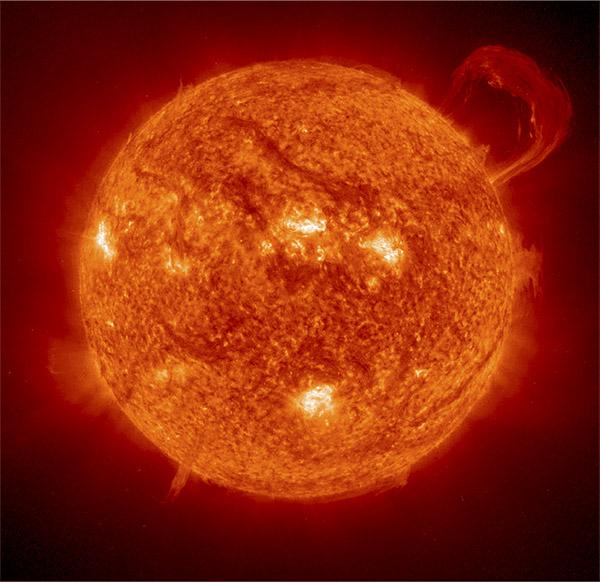 The sun isn’t a planet, but is a dwarf star—Earth’s nearest star. This electrically charged gassy star has an outer layer, called the photosphere, which registers about 5,500 degrees Celsius (10,000 degrees Fahrenheit). However, at the sun’s core the temperature is about 15 million degrees C (27 million degrees F). The sun has a magnetic field and about every 11 years the sun’s magnetic field, north and south poles, switch ends. This is known as the solar cycle.

Beautiful auroras have their beginning with the sun. The amazing colorful display seen by the human eye has its beginning weeks prior due to activity on the surface of the sun. During a particular type of solar storm called a coronal mass ejection, the sun discharges large amounts of electrified gas and plasma into space. When those electrically charged particles enter Earth’s atmosphere and collide with molecules and atoms of gas, primarily oxygen and nitrogen, they release energy in the form of light.

Facts about the sun:

The sun is a giant hot sphere of gas at the center of our solar system. Nuclear fusion is the source of the sun's energy. The sun is the main source of energy for sustaining life on Earth. 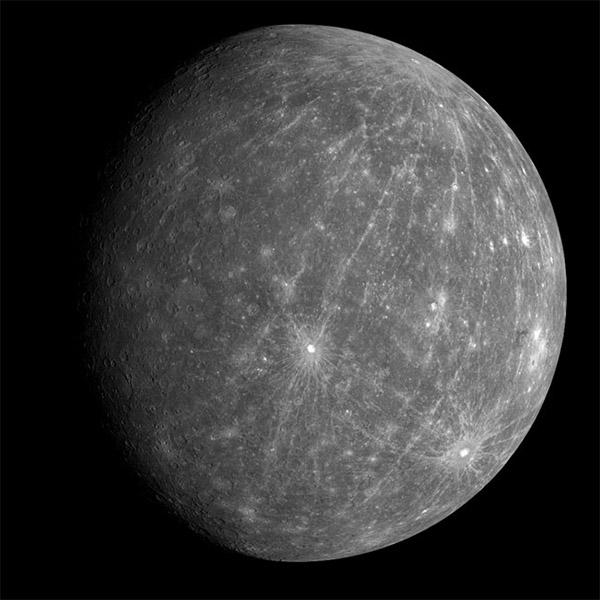 Mercury has no moons and no rings. Most of its surface would appear greyish-brown to the human eye. Mercury's surface resembles that of Earth's moon, scarred by many impact craters resulting from collisions with meteoroids and comets.

The bright streaks extending from Mercury’s craters are called "crater rays." They are formed when an asteroid or comet strikes the surface. The tremendous amount of energy that is released in such an impact digs a big hole in the ground, and also crushes a huge amount of rock under the point of impact. Some of this crushed material is thrown far from the crater and then falls to the surface, forming the rays. Fine particles of crushed rock are more reflective than large pieces, so the rays look brighter. The space environment—dust impacts and solar-wind particles—causes the rays to darken with time.

Mercury is covered by a massive network of fault lines that originated when the planet cooled, and shrank, shortly after it was formed. Water ice is believed to exist in craters near Mercury's poles, where it would be in constant shadow and never melt.

Like our moon, Mercury is airless. Because of this, and how close it is to the sun, Mercury has the greatest day-night temperature difference of all the rocky planets (425˚C to -180˚C). 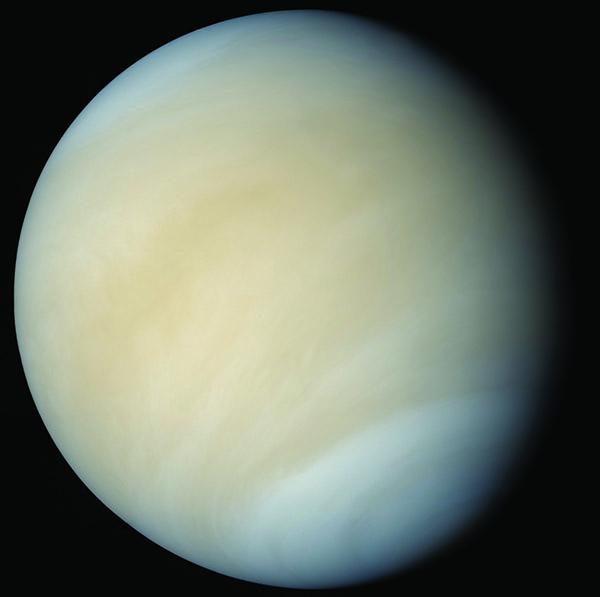 Because it’s the brightest object in the sky (except for the sun and moon) Venus can be seen from Earth without a telescope. Venus has no magnetic field.

Venus is sometimes referred to as Earth’s sister planet because of similarities: they are both about the same size (Venus being slightly smaller), their densities and chemical compositions are similar, and both have few craters which indicates their surfaces are relatively “young.”

Venus is the hottest planet in the solar system, with surface temperatures hot enough to melt lead, zinc, tin, and several other metals. It can reach temperatures of 462° C (864° F), about twice as hot as a typical household oven.

Extreme heat is trapped within Venus's atmosphere by a thick layer composed of carbon dioxide and clouds of sulfuric acid.

Venus has no moons and no rings. 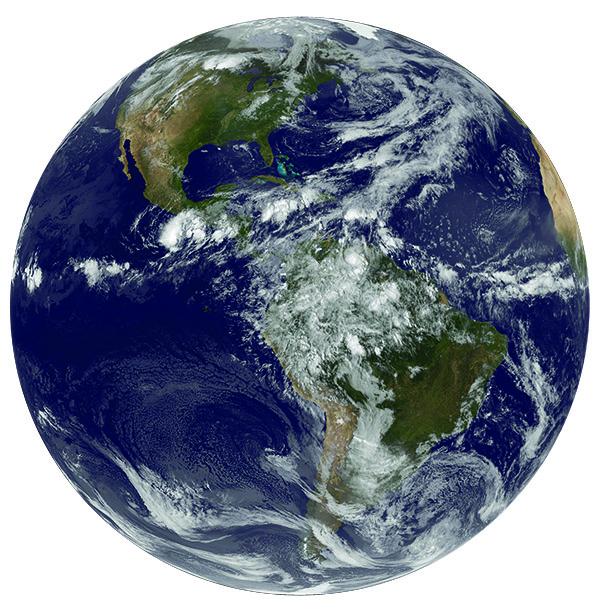 Earth’s atmosphere protects us from incoming meteoroids and is just the right thickness to keep us warm. Although Earth has only one atmosphere, it consists of six different layers.

Earth houses more than 7.5 billion people and is the only planet known to support life. Earth’s atmosphere is composed mainly of nitrogen and oxygen.

The rotation of the planet's liquid iron core generates a powerful magnetic field. This magnetic field funnels charged particles from the sun into Earth's atmosphere at both poles. The particles excite gases in the atmosphere, producing lights in the sky we know as aurora borealis and aurora australis. 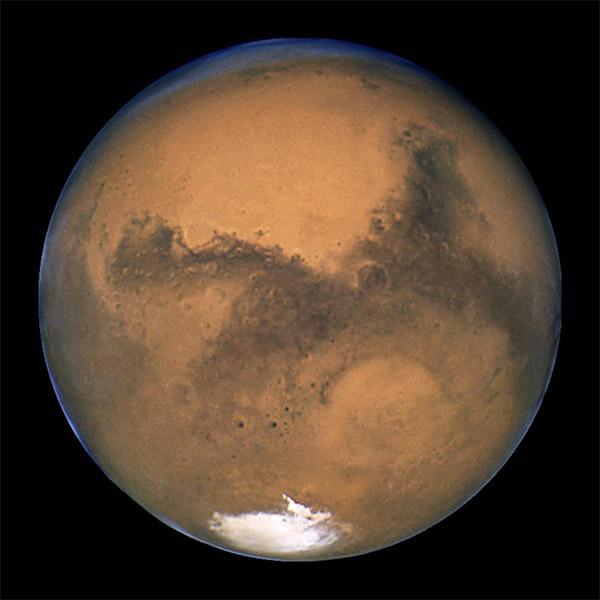 Mars, often referred to as the red planet because of the color of rusty iron in its surface, is the most-explored body in our solar system. Twenty spacecraft and four rovers from earth have visited this cold desert planet so far.

Astronomers once believed Mars had seas and regions of vegetation. They now understand sandstorms cause the light and dark areas visible on the planet's surface.

Evidence of erosion caused by flowing water implies Mars was once much warmer and had a thicker atmosphere.

Mars has canyons and volcanoes, just like Earth. It cannot currently support life because of its thin atmosphere and limited amounts of oxygen and water vapor. 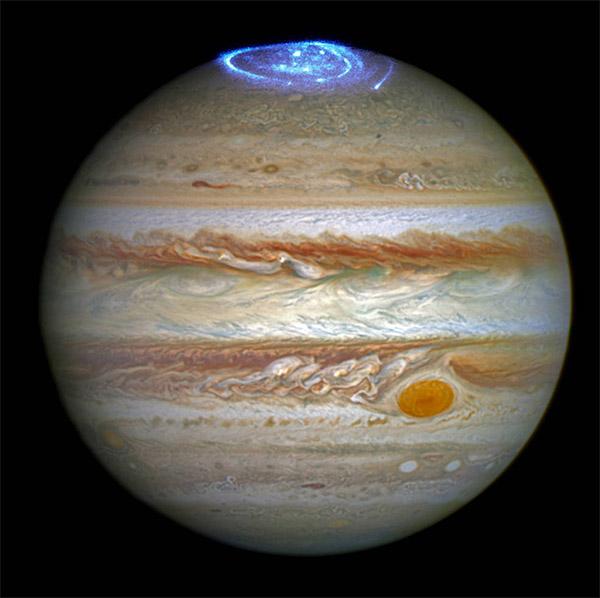 Jupiter is one of the brightest objects in the sky and one of the five planets in our solar system visible to the unaided eye.

Jupiter's familiar stripes and swirls are actually cold, windy clouds of ammonia and water, floating in an atmosphere of hydrogen and helium. Jupiter’s iconic Great Red Spot is a giant storm bigger than Earth that has raged for hundreds of years.

Jupiter is the largest planet in the solar system. It is a gas giant twice as massive as all the other planets combined.

The planet is believed to have 79 moons, 53 of which have been named. Jupiter has rings that are difficult to see, even with telescopes. The rings are composed of dark dust, possibly from its moons.  Jupiter's Great Red Spot is a hurricane-like storm that has been observed for more than 300 years. 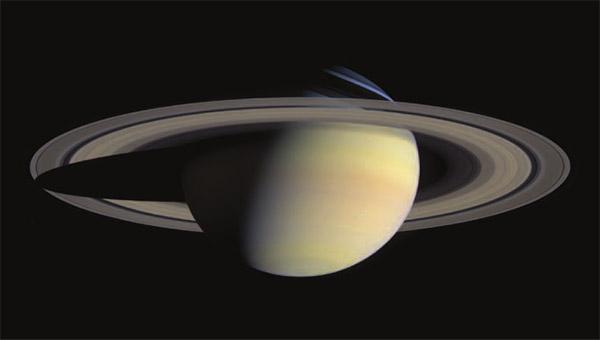 Saturn is the second largest planet in our solar system, after Jupiter. Saturn’s beautiful rings are one of the most intriguing aspects of this planet. Saturn's rings are thought to be pieces of comets, asteroids or shattered moons that broke up before they reached the planet, torn apart by Saturn's powerful gravity. They are made of billions of small chunks of ice and rock coated with another material such as dust. The ring particles mostly range from tiny, dust-sized icy grains to chunks as big as a house.

Twice every 29.5 years Saturn appears ringless. This is an optical illusion: Earthlings cannot see Saturn’s rings when the rings are edge-on as viewed from the Earth. They are barely visible through powerful telescopes.

Saturn is a massive planet surrounded by an outer layer of gases mostly made up of hydrogen and helium. A six-sided jet stream has been observed on Saturn's north pole.

Saturn is well-known for its visible rings mostly made of ice, dust, and rocks. The rings are about 400,000 km (240,000 mi) wide, the approximate distance from Earth to the moon.

Saturn has 62 moons, 53 have been confirmed and nine are still being studied. 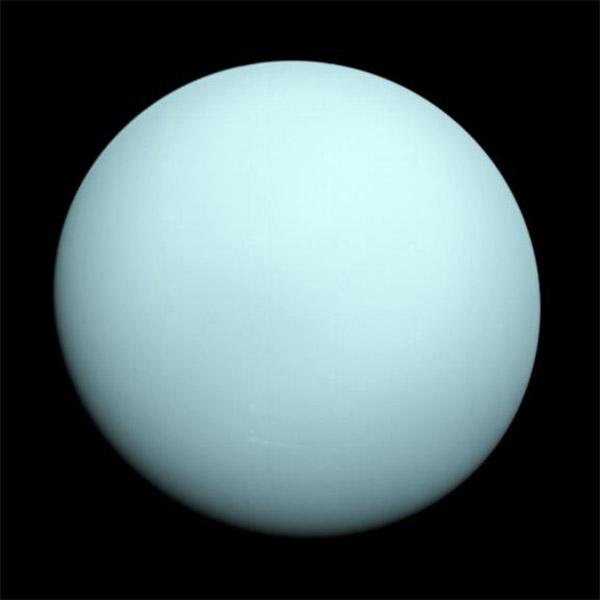 Uranus, the seventh planet from the sun, is very cold and windy. Scientists would like to know more details about Uranus and due to advancements in technology this is becoming a reality. Next-generation radiometers with thermopile sensors are being developed that could provide answers about Uranus’ atmosphere and cloud layers.

Like its neighbor Neptune, Uranus likely formed closer to the Sun and moved to the outer solar system about 4 billion years ago.

Uranus is one of the ice giants. It has the third largest diameter of the planets in our solar system. Only Jupiter and Saturn are larger.

Uranus is mostly fluid. Trace amounts of methane in the atmosphere give the planet a blue color.

Uranus has 13 known rings and 27 small moons. It has auroras that are not aligned with the poles because of its lopsided magnetic field. 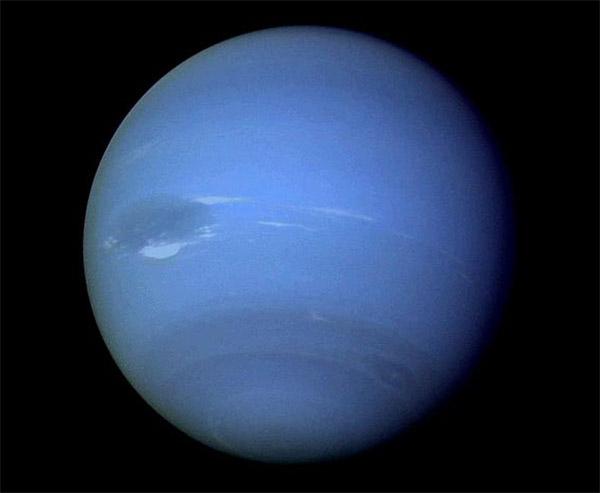 Neptune's blue color is largely the result of absorption of red light by methane in the atmosphere, but there is some additional as-yet-unidentified factor which helps give the clouds their rich blue tint.

Like Jupiter and Saturn, Neptune has an internal heat source -- it radiates more than twice as much energy as it receives from the sun.

Neptune is an ice giant. It is the only planet in the solar system that cannot be seen with the naked eye. Its windy atmosphere is made up primarily of hydrogen, helium, and methane.

Neptune has 13 confirmed moons and six faint rings. Neptune's largest moon, Triton, is the only large moon in the solar system that orbits its planet in the opposite direction from the planet’s rotation. 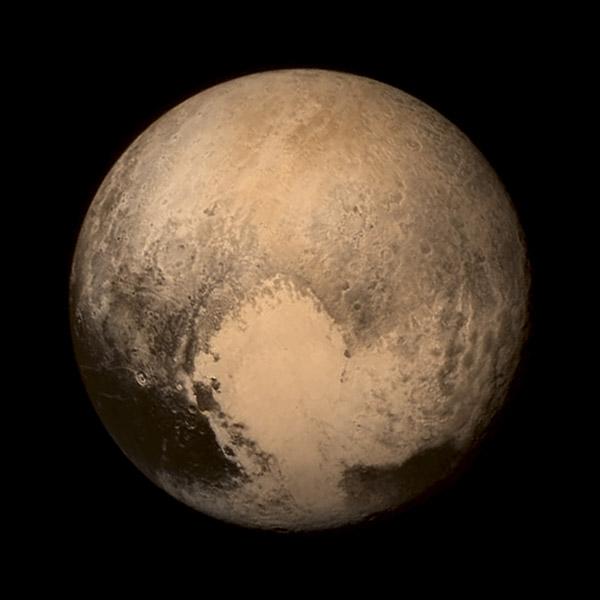 Pluto—which is smaller than earth’s moon—has a heart-shaped glacier the size of Texas and Oklahoma. This fascinating world has blue skies, spinning moons, mountains as high as the Rockies, and it snows—but the snow is red.

Pluto is no longer considered a planet. Pluto is considered  a dwarf planet, a category that includes Makemake, Haumea, and Eris.

Pluto has five moons. Its largest moon, Charon, is so big that Pluto and Charon orbit each other like a double planet.

Pluto is located in the Kuiper Belt, an area of space scientists are just beginning to study. The Kuiper Belt is a donut-shaped region of icy objects beyond the orbit of Neptune.